Ernst Lubitsch’s Angel may be more drama than comedy, but its sophisticated view of a marriage in limbo is appealing and thought-provoking for a 1930s film.

Ernst Lubitsch focuses more on drama than comedy in his 1937 romantic trifle Angel. A sophisticated look at the work behind a successful marriage rather than through the obvious outward signs of opulence and prosperity, Angel offers its three leading players wonderfully appealing and yet reserved roles, and the director makes sure the film aims at truths rather than at purplish melodrama.

Successful British diplomat Sir Frederick Barker (Herbert Marshall) spends much time away from his opulent home leaving his beautiful wife Lady Maria Barker (Marlene Dietrich) alone with a lot of time on her hands. She often takes quick trips to Paris for amusement, and on one of her trips, she meets charming Anthony Halton (Melvin Douglas) who falls instantly in love with her. Though she refuses to reveal who she is, they enjoy each other’s company for a day before she whisks herself back to London to reunite with her husband. And then one day, quite by accident, Anthony meets Sir Frederick, they strike up a friendship, and he’s invited to dinner where he discovers quite to his surprise who Frederick’s wife actually is.

Based on a play by Melchior Lengyel, Samson Raphaelson’s screenplay and Ernst Lubitsch’s direction use restraint and reserve to keep this complicated love triangle on an adult level with everyone acting responsibly and reasonably rather than by using the kind of overly emotive shouting and screeching that one might have expected from the typical love triangle scenario (Dietrich herself had been involved fairly recently in one such purple tangle of emotions in The Devil Is a Woman). In allowing the potentially cuckolded husband the chance to consider what he had done to contribute to his wife’s dissatisfaction, the film takes on a sophistication rare for the era (but not rare for a Lubitsch film; consider Trouble in Paradise or Design for Living). And he frames his comedy-drama using his usual Lubitsch touches: monumental events happening off screen while the camera focuses discreetly on something like a door or a telephone, a mobile camera that peeks into a series of windows in a salon allowing us to see exactly what transactions are transpiring there, servants commenting on the mundane which actually reveals much about the mindset of the main characters. We find out during the men’s conversation that they had actually been involved early in their lives in another triangle with a French peasant girl during World War I. This might be stretching coincidences perhaps a bit too far, but otherwise the screenplay is beautifully constructed.

It’s also a pleasure to see Marlene Dietrich playing with much more restraint here than in her two previous Paramount films under Josef von Sternberg’s direction. This was the last film she made under her original 1930 Paramount contract which was not picked up (The Scarlet Empress and The Devil Is a Woman had both been box-office disasters, and while this one did moderately well. Paramount found her films too risky to finance any longer). Yes, she’s still swathed in Travis Banton gowns and furs (though nothing nearly as outrageous as his creations for The Devil Is a Woman), but the clothes are far less important in this than her feelings and her behavior. It’s one of her most admirable performances. Herbert Marshall plays his usual earnest, true blue leading man, consumed with work (as he had been in his earlier Dietrich film Blonde Venus) and ignoring his wife’s discontent. Melvyn Douglas makes a most appealing final angle to the triangle, not demanding but spurred on by love. In smaller roles, Edward Everett Horton as Marshall’s valet and Ernest Cossart as his butler have a couple of scenes each to make solid impressions, and Laura Hope Crews, while curious casting as a Russian duchess, plays her role straight without any natty mannerisms.

The film has been framed at its theatrical 1.37:1 and is offered in 1080p resolution using the AVC codec. It’s a beautiful picture in the typical, striking Paramount 1930s mold with a solid grain structure, superb grayscale with deep blacks and glistening whites, and excellent contrast. Any randomly tiny dirt or dust specks are insignificant. The menu does not feature a chapter listing, but the movie has been divided into 11 chapters.

The DTS-HD Master Audio 2.0 mono sound mix has been engineered expertly to remove any age-related problems with hiss, crackle, pops, and flutter. The dialogue is also perfectly discernible, and the Frederick Hollander music, especially one beautiful but nameless melody that is played significantly throughout the movie, has been combined with sound effects to complete the arresting soundtrack.

Audio Commentary: Ernst Lubitsch expert/film historian Joseph McBride offers a thoroughly interesting and engrossing discussion of the director’s career, focusing on Angel, of course, but also noting influences to its success from earlier career highlights as well as follow-up vehicles with Dietrich, Douglas, and others.

Marlene Dietrich/Kino Trailers: The Blue Angel, The Song of Songs, The Flame of New Orleans, The Spoilers, Pittsburgh, A Foreign Affair, No Highway in the Sky, Witness for the Prosecution.

Ernst Lubitsch’s Angel may be more drama than comedy, but its sophisticated view of a marriage in limbo is appealing and thought-provoking for a 1930s film. Kino’s Studio Classics release is a must have for fans of the stars or its legendary director. Highly recommended!

Many thanks for this review. I first saw Angel decades ago and it was also my first viewing of Melvyn Douglas in his younger days. (I knew him from Hud and The Americanisation Of Emily) I'll be very interested to see this film again after all these years, and it's always a pleasure to watch Herbert Marshall.
Reactions: Robert Crawford and Matt Hough

I watched Angel this evening and enjoyed it immensely. Matt, I completely agree with your review... what a stunning presentation! I now rank it among my favourite Dietrich films.
Reactions: Matt Hough and Robert Crawford

Thank you for the review. Some critics didn't like this movie as it failed to live up to the stars in it. I've never seen it, but, I will pick it up during one of Kino's sales.
Expand signature
Crawdaddy's favorite "The Mandalorian" Quotes: "This is the Way" and "I have Spoken"

Andrew Budgell said:
I watched Angel this evening and enjoyed it immensely. Matt, I completely agree with your review... what a stunning presentation! I now rank it among my favourite Dietrich films.
Click to expand... 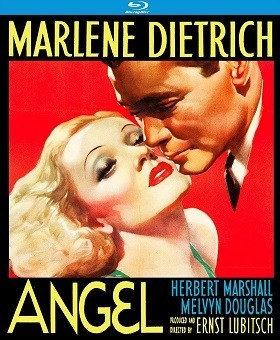