Based on the novel of the same name by Norman Lebrecht, The Song of Names features Tim Roth as a man searching for his adoptive brother, who seemingly disappeared 30 years earlier.

In 1951, crowds gather at a concert hall in London to hear a concert performed by 21-year old violin prodigy Dovidl Rapaport (Jonah Hauer-King), but the young man never arrives. His adoptive brother, Martin (Gerran Howell), tries to convince their father Gilbert (Stanley Townsend) that he’s just late or lost and will be there shortly, but alas he never arrives and Gerald is forced to cancel the concert, having to refund all tickets and paying for the rental of the concert hall out of his own pocket, essentially liquidating all of his funds.

Thirty years later, the adult Martin (Tim Roth), now a music mentor and scout, witnesses a young man at a violin audition who has a familiar way of placing resin on his bow and playing style. This re-ignites a longing to find Dovidl, whom many thought to have perished. As it turns out, Dovidl was adopted by Martin’s parents after Dodidl’s father brought him from Warsaw to London just prior to Germany’s invasion of Poland in 1939, with Gerald offering to make sure Dovidl continued his violin training and care for him, raising him in the Jewish tradition. Martin’s search for his brother takes him to Warsaw and eventually New York, as Martin reminisces of his childhood with Dovidl (seen in flashbacks). Although framed as a mystery, we pretty much know well in advance that these two will be reunited, with Clive Owen playing the adult Dovidl. It is that false suspense that is the movie’s biggest failure, but one that can be forgiven as Director François Girard (The Red Violin) does succeed in also telling a story about survivor’s guilt, and the revelation of what The Song of Names is is both heart-wrenching and beautiful at the same time.

The Song of Names is a beautifully photographed film, shot by David Franco (episodes of Game of Thrones and Ray Donovan) in the 2.39:1 aspect ratio. The movie has an overall warm tone to it, with emphasis on yellows and browns. Colors are somewhat desaturated, likely to give it a more period look (the movie takes place in World War II era London, late 1940s-early 1950s, and early 1980s), but still appear natural. Detail is excellent, from the exquisite design of Martin’s childhood home to the peeling paint of an apartment in 1980s Warsaw. Contrast is also excellent, with deep blacks that retain intricate shadow detail (the practice session in a darkened room at the beginning of chapter 5 is a great example).

Although the packaging indicates a 5.1 DTS-HD MA track, Sony has included a very immersive 7.1 track in its place. The additional surround channels really help immerse the viewer in the use of music throughout the film, as well as giving a wider sense to atmospheric sounds like wind, rain, birds, etc. Dialogue is clear and well-prioritized throughout.

Behind the “Song of Names” (1080p; 7:34): This is a fairly general overlook at the making of the film, including a brief interview with the author of the source novel.

Howard Shore: Composing & Scoring (1080p; 2:31): I always enjoy featurettes that focus on the music of a film, I just wish this was a bit longer. Howard Shore discusses the challenges of scoring this film and recording the score inside a church in Montreal for its acoustics.

Howard Shore & Ray Chen (1080p; 3:23): Shore and Chen discuss their contributions to the film (Chen played all of the violin solos).

The Song of Names may not be a very suspenseful film, but I still found Dovidl’s journey as Martin uncover it very moving. Sony’s presentation is excellent. 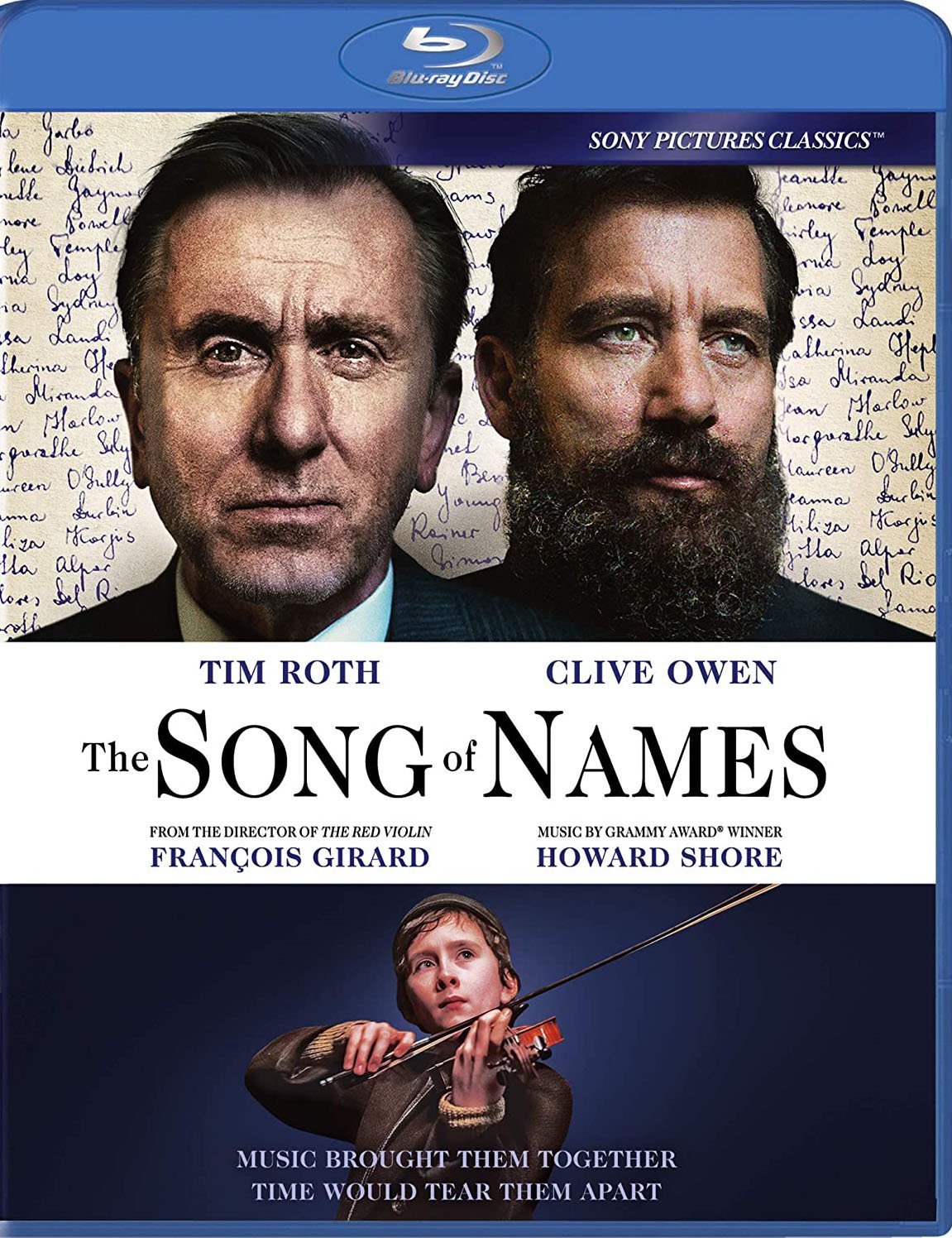