Forum List What's new Dark Style Change width
Log in Register
What's new Search
Menu
Log in
Register
Navigation
Install the app
More options
Dark Style
Close Menu
Posted on January 24, 2018 by Todd Erwin
You are using an out of date browser. It may not display this or other websites correctly.
You should upgrade or use an alternative browser.
Top-notch psychological thriller 4.5 Stars

Dan Trachtenberg made a big splash with his directorial debut, 10 Cloverfiled Lane, a superb psychological thriller that has now been released on 4K UHD Blu-ray from Paramount Pictures Home Entertainment.

I may be a bit biased in my opinion of 10 Cloverfield Lane, and that is partly because I knew the film’s director, Dan Trachtenberg, when he was an infant, and I worked on several student-produced films at Cinekyd with his older brother, David (an accomplished film editor), around that time. Although 10 Cloverfield Lane claims to be part of the Cloverfield universe (there are references to the first film early on), it is also a stand-alone psychological thriller with supernatural and science fiction overtones. Michelle (Mary Elizabeth Winstead) has broken up with her boyfriend and has fled the city, only to have her car run off the road while driving out in the country late at night. She wakes up in an underground bunker laying on a matress, her knee in a make-shift brace, an IV stuck in her arm, and chained to the wall. A large, overbearing elderly man, Howard (John Goodman in a performance that should have, at the very least, earned him an Oscar nomination), brings her a tray of food, trying to convince her that he had rescued her from an apocalyptic event that had occurred outside. Also hanging out in the bunker is Emmett (John Gallagher, Jr.), a young man who helped Howard build his fallout shelter. But something is not quite right with Howard and his conspiracy theories of what happened above that has made the air unsafe, and the various aircraft that can be heard flying over aren’t helping his stories, neither are his memories of his daughter Megan. It is the tensions between these three characters and the uneasiness of their surroundings that drive the story, all told from Michelle’s point of view, which Dan Trachtenberg pulls off beautifully. Upon first viewing, the third act seemingly comes out of nowhere, but after subsequent screenings, the seeds are planted throughout the first and second acts.

10 Cloverfield Lane was captured at up to 6K resolution on Red Epic Dragon cameras, completed as a 2K digital intermediate. I assume Paramount upscaled that DI to 2160p, and Dan Trachtenberg recently tweeted that he supervised the transfer created for this release, which includes HDR grading using Dolby Vision. The Blu-ray from 2016 looked very good, but the new UHD release is outstanding. There is a huge uptick in fine detail on display here, including more refined textures in the brick and mortar walls, fabrics, and John Goodman’s stubbly, scraggly beard. Colors, although subdued as they were in the theatrical release and Blu-ray, are a bit more natural. Black levels are also increased, with much more shadow detail evident in many of the darker scenes (such as when Michelle has to crawl through the air ducts). This is all based on viewing the film with HDR10, since my Sony UHD equipment is incapable of displaying Dolby Vision at this time.

Paramount has included the same Dolby Atmos track that appeared on the Blu-ray release, and although one would think that an object-based soundtrack might be wasted on a film of this kind, you would be wrong. Heights are used to great effect, not only when aircraft is flying overhead, but even subtle sounds like the air ducts and buzzing of fluorescent lighting. LFE is also used extensively, again with the low rumbling of the air ducts and even as a shock tactic at one key moment in the film. Dialogue is strong and clear throughout.

The bulk of the extras are found on the included original Blu-ray release, although the commentary track has been ported over to the UHD disc.

Audio Commentary with Director Dan Trachtenberg and Producer J.J. Abrams: This is a fun and informative track, with the two discussing the mechanics of making the film, but also some of what influenced Trachtenberg for certain shots and sequences, and how it all ties in to the Cloverfield universe. This track can be selected from the Settings submenu on the UHD disc.

The Making of 10 Cloverfield Lane (1080p; 34:42): Playable as one long piece or seven individual featurettes that cover just about every aspect of the making of the film, including Cloverfield Too, Bunker Mentality, Duck and Cover, Spin-Off, Kelvin Optical, Fine Tuned, and End of Story.

Digital Copy: An insert contains a code to redeem a digital copy thru UltraViolet retail partners and on iTunes. Unfortunately, Vudu only has the film available in HDX and 5.1 audio at this time.

10 Cloverfield Lane arrives on 4K UHD Blu-ray with a terrific upgraded video presentation, but nothing more. 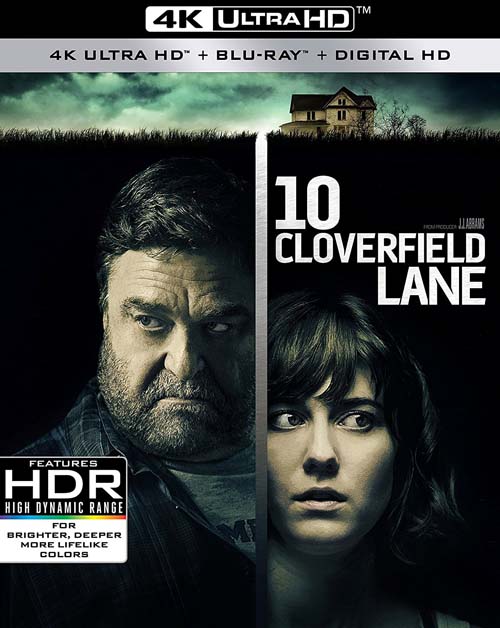