Posted on January 24, 2018 by Robert Harris
Strangely, a magnificent 4k example of film, made with fillum, that should not be overlooked. 4 Stars

With over two hundred films now in release in 4k format, I’d often wondered why the very first to come to mind, as the quintessential 4k release had not yet appeared.

Now, thanks to the wonderful folks at Columbia, it has.

Bill Murray and Andie MacDowell can now be yours, exclusively from Best Buy, for only $24.99.

Photographed on 35mm film in 1992, and released in 1993, its elements have not only survived, but have been upgraded from mere fillum, and Dolby Stereo, to 4k and Dolby Atmos.

and strangely, via 4k projections and HDR, I’ve come to realize precisely how beautifully this film was photographed.

Mocketh, if you will, a 4k release of a lower budgeted (and extremely beloved) motion picture, but don’t for a moment believe that 4k is wasted here.

With a main title sequence so sharp that one might harm themselves by getting to close to the screen, Groundhog Day is a stunner in the 4k.

A couple of things to watch out for, as you can now actually see them in detail, Doc Erickson (aka C.O. Erickson) as Herman, the bank guard.

Don’t know who Mr. Erickson was?

Best to look him up, as you’re missing out on a man with an extraordinary career.

Also, look for Michael Shannon, in his first screen appearance, and director Ramis as the neurologist.

Also, while you’re visiting, don’t forget to pick up some insurance from Stephen Tobolowsky.

Strangely, a magnificent 4k example of film, made with fillum, that should not be overlooked.

As always, Columbia has done wonders with this one. 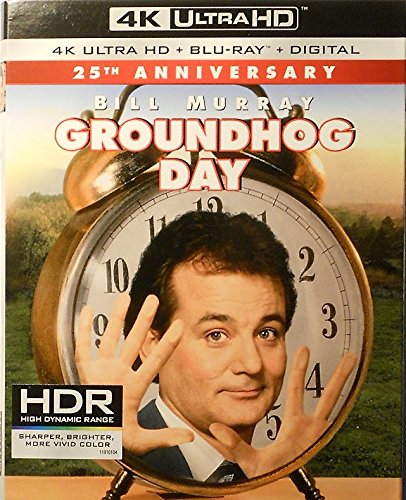