According to market analysis by Sensor Tower, U. S. consumer spending in the top 10 subscription video on demand (SVOD) mobile apps grew by 77% in 2017 to $781m on the App Store and Google Play. The research company also confirmed that these same apps during the fourth quarter of 2017 grew nearly 88% to approximately $242m, up from $129m in 4Q16. Clearly, the cord-cutting trends of US consumers are on the rise. 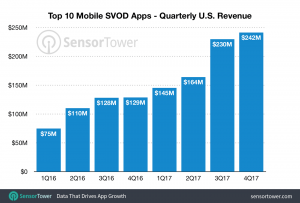 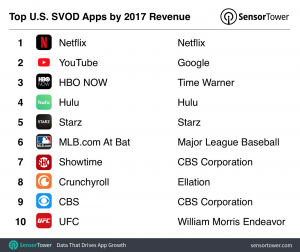 However, a trend is emerging that suggests new subscribers are signing up for apps just to catch the latest season of a TV show, and then ditching it as soon as soon as the end credits of the last episode roll. While some providers are managing to offset that trend, it’s a reality that will continue to loom over the SVOD space.

HBO Now U.S. revenues saw a surge during the Game of Thrones season 7 airing in the third quarter of 2017, and even though they dipped in Q4, the company retained many subscribers who had ostensibly only signed up to watch the series. However, some are speculating that with GoT not scheduled to return until 2019, HBO might not have a title with the same pull to draw in the punters, and rival Netflix has already suggested it will spend up to $8bn on content in 2018 alone.

CBS, meanwhile, saw its year-on-year revenue double with the release of its own original program, Star Trek: Discovery. Again, the network managed to retain users who had originally signed up for Star Trek by capitalizing on some of the most-watched shows, including Young Sheldon and Big Bang Theory, and it also provided NFL games to cord-cutters.

In comparison to the 77% growth of the top SVOD apps, overall U.S. consumer spending on the App Store and Google Play increased by approximately 30% last year, grossing $14.4bin. Worldwide app revenue grew by 35% to achieve a $60bn gross in 2017.