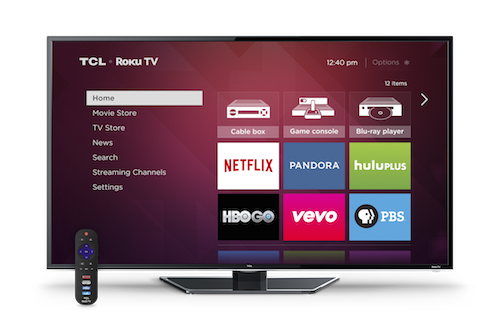 CORONA, CA – May 18, 2017 - TCL®, America’s fastest-growing television brand and leader in providing streaming content, today published the results of a new national survey* conducted by Ipsos on TV app usage, the proliferation of streaming on the big screen and the popularity of specific apps. According to the survey which uncovered and ranked the Top 25 apps used for streaming on TVs, the majority of Americans stream content on their TV - either directly through the apps on their TV or by connecting a smart device to their television. The study revealed the diversity of apps that are streamed on TVs, with every app in the Top 25 watched by almost 10% of streamers.

The survey reaffirmed cord cutting will continue to be a major trend moving forward while cable subscribers are finding value in apps as a way to extend the use of their cable package and as a substitute for additional cable boxes. Live TV streaming apps, Sling TV and Playstation Vue, that can replace cable were used by 10% of app users while Hulu, which offers current seasons of popular shows and is a favorite for cord cutters was used by 30% of respondents. Premium and basic cable apps, such as HBO Go and CBS All Access that allow cable subscribers additional access to their content were used by 43% of app users. Apps from Time Warner Cable, Spectrum TV, and Xfinity TV that replace a cable box were outside of the Top 25 but combined are used by 7% of app users.

“As streaming continues to grow in popularity, consumers are seeking out a wider variety of channels that deliver the content they love. Five years ago, there were only a few apps that mattered, now when you look at the Top 25, all of them are being watched by millions of households that are passionate about them,” said Chris Larson, TCL senior vice president. “We recognized this growing need and partnered with Roku back in 2013 to develop the TCL Roku TV product knowing that they had the breadth of content as well as the scale and technology to remain a leader, ensuring that our Smart TVs would always have easy access to the most content. With more than 5,000 streaming channels it is no surprise that the TCL Roku TV offers all 25 of the most popular apps, but it is especially exciting to see that more and more Americans are seeking out and enjoying the vast variety of content we can offer.”

While Netflix (#1 Ranking, 73%) and the movies and TV streaming category dominated app usage, streaming music on the TV was also popular among app users with over 51% of Americans listening to music or watching music videos. Four music apps cracked the Top 25 (Pandora (#4), Spotify (#7), iHeartRadio (#14), Vevo (#25)), with MTV and TuneInRadio outside the Top 25. Sports Apps were popular with over one third of Americans streaming at least one on their TV. WatchESPN (#8), Fox Sports Go (#13), and NFL (#16) apps all finished in the Top 25, with NFL Sunday Ticket also receiving consideration. Among Millennials, Fox Sports Go was the top ranked Sports app.

The findings reinforced the trend of American consumers cutting their ties to cable companies, using smart TVs like TCL Roku TVs® to help save costs by eliminating the need for a cable box and extra devices. This new generation of cord cutters and cord nevers continue to discover and support the multitude of streaming apps available to them in a variety of categories, from movies and TV shows to music and sports.

The complete Top 25 rankings including a breakdown by generation and gender, as well as a list of which Smart TV platforms offer each of the apps, is available at www.toptvapps.com

To learn more about TCL and its products, please visit www.tclusa.com

These are findings from an Ipsos poll conducted March 6 – 10, 2017 on behalf of TCL. For the survey, a sample of 4,024 U.S. adults ages 18 and over was interviewed online, in English, including 2,115 adults who say they use apps - either on their TV or via a smart device - to watch streaming content on their TV. The precision of Ipsos online polls is measured using a credibility interval. In this case, the poll has a credibility interval of plus or minus 1.8 percentage points for all respondents surveyed, and plus or minus 2.4 percentage points for app users.

The sample for this study was randomly drawn from Ipsos’s online panel (see link below for more info on “Access Panels and Recruitment”), partner online panel sources, and “river” sampling (see link below for more info on the Ipsos “Ampario Overview” sample method) and does not rely on a population frame in the traditional sense. Ipsos uses fixed sample targets, unique to each study, in drawing sample. After a sample has been obtained from the Ipsos panel, Ipsos calibrates respondent characteristics to be representative of the U.S. Population using standard procedures such as raking-ratio adjustments. The source of these population targets is U.S. Census 2015 American Community Survey data. The sample drawn for this study reflects fixed sample targets on demographics. Post-hoc weights were made to the population characteristics on gender, age, region, race/ethnicity and income.

Statistical margins of error are not applicable to online polls. All sample surveys and polls may be subject to other sources of error, including, but not limited to coverage error and measurement error. Where figures do not sum to 100, this is due to the effects of rounding. Ipsos calculates a design effect (DEFF) for each study based on the variation of the weights, following the formula of Kish (1965). This study had a credibility interval adjusted for design effect of the following (All respondents: n=4,024, DEFF=1.5, adjusted Confidence Interval=3.3; App Users: n=2,115, DEFF=1.5, adjusted Confidence Interval=3.9).

I pretty much live on Netflix, YouTube, Amazon Video, Fox Sports Go and NBC Sports (until the NHL playoffs are done).

It's a bit strange that Vudu didn't make the list.....

agreed. Also I'm surprised to not see PLEX there.

Plex is always on the top downloads from many of the systems, Roku, Amazon and others. I find it odd that PLEX and VUDU do not make the list. Calling Shenanigans on this story. If you click on the link you will notice they are touting their televisions with this survey.

I'll tell you exactly why Vudu didn't make the list - "TCL" is a Roku TV, and Roku is a business partner with FandangoNow...

Cranston37 said:
I'll tell you exactly why Vudu didn't make the list - "TCL" is a Roku TV, and Roku is a business partner with FandangoNow...
Click to expand...

Both movie services are available on Roku, and neither made TCL's list of apps.

Todd Erwin said:
Both movie services are available on Roku, and neither made TCL's list of apps.
Click to expand...

Yes, but isn't FandangoNow built into the system and not a stand-alone app?
You must log in or register to reply here.

Looking for advice on a new TV: TCL 6 Series vs Vizio P Series or something else?
6 7 8 Tags advice tcl vizio