Stanley Kubrick’s examination of the pervasiveness of evil and the disintegration of a family from that evil finally gets its best-ever video release with this UHD presentation of The Shining.

Perhaps no modern film generates more heated arguments relative to its merits than Stanley Kubrick’s The Shining. Many over the years, including its original author Stephen King, have been irritated about the film’s pacing, its lack of fidelity to the original source book, the out-of-left field casting, but Stanley Kubrick’s films have always been deliberately paced, but the payoffs have almost always been worth it. Lots of movies aren’t faithful to their original novels, but that doesn’t necessarily make them any less entertaining as films. And avant-garde casting is usually one of the most interesting aspects to Kubrick’s filmmaking.

Jack Nicholson stars as former college professor Jack Torrance who takes the job of winter caretaker of a luxury Colorado hotel, The Overlook, in order to have the peace and quiet necessary to write a book. Gradually, winter sets in and long, lonely hours in the large space with only his wife Wendy (Shelley Duvall) and son Danny (Danny Lloyd) for company begin to take their toll: he becomes possessed by the evil legend associated with the hotel: a former caretaker (Philip Stone) who murdered his wife and two daughters with an ax and then blew his head off with a rifle, only one of several hotel spirits who seem to be on speaking terms with the troubled would-be writer.

The title of the film involves a power which Jack’s son possesses. “Shining” is a type of clairvoyance which enables Danny to see both past and future occurrences as well as read certain thoughts in the minds of others who also have this power. Kubrick uses this power of shining to picture in the child’s mind the grisly murders which took place earlier and which continually haunt Danny’s subconscious. It’s strange, however, that this ability doesn’t seem to be much help in his climactic efforts of escaping from his deranged father. Luck and ingenuity are much more worthwhile commodities when the chips are down. The script by Stanley Kubrick and novelist Diane Johnson has other inconsistencies. The Overlook’s head chef Dick Hallorann (Scatman Crothers) also possesses the ability to shine, but it doesn’t help him when he dashes back to aid the family in its time of crisis. That’s not explained nor are the hotel’s many ghosts, some victims of horrific violence and others just having a good time, who seem to appear to some people some of the time or to everyone at other times. While it’s not always necessary for an audience to be provided with all the answers in a ghost story like The Shining, it does offer ample ammunition for those who want to take potshots at the film for its seeming lack of constancy.

The film’s genius, however, comes in the subtle qualities of terror that director Kubrick gradually has inserted to creep over the viewer during the movie’s lengthy running time (144 minutes). There’s talk about murders and cannibalism early to plant the seeds of potential gruesome happenings to come. An early conversation between Duvall’s Wendy and Crothers’ Hallorann seems banal, but the camera focuses on several long, threatening butcher knives in the background, one of which plays an important part in the later plot. Early warnings about Room 237 prepare us for one of modern cinema’s most grotesque scenes. The eerie music themes by Bella Bartok (along with some Wendy Carlos compositions and themes by other hands), some chilling sound effects by Ivan Sharrock, and the marvelous Steadicam tracking camerawork (used extensively in the hotel corridors where we never know around which corner danger lurks and in a high shrub maze that seems evilly complex in construction) and early-on bird’s eye view shots of the Torrance car twice winding around a mountain road to deliver the family to its possible doom all contribute mightily to the film’s horrific effectiveness.

The casting of the three main characters might be unconventional; it may take more than one viewing to reconcile oneself to Shelley Duvall’s jittery, sputtering, dead-in-the-eyes take on Wendy, and Danny Lloyd isn’t a particularly charismatic young actor (imagine what Haley Joel Osment in his prime could have done with the role). And Jack Nicholson? Well, his over-the-top take on Jack is unusual, and it certainly holds one’s attention. Perhaps under the circumstances, that’s all that one could hope for. To his credit, Nicholson does build his performance from a slightly off kilter man in his initial interview for the job to the manic lunatic we see in the latter third of the picture. It’s actually a thoughtful performance whose extremes are understandable amid the other ghostly happenings at the Overlook Hotel. Pros Scatman Crothers, hotel director Barry Nelson, doctor Anne Jackson, barkeep Joe Turkel, and racist butler Philip Stone all add variety either directly into the story or around its fringes.

Maybe The Shining isn’t all that it could have been, but it does manage in no little way to produce an ample supply of goose pimples even on repeated viewings. That’s no small feat.

The film’s 1.85:1 original theatrical aspect ratio is faithfully rendered in this 2160p transfer using the HEVC codec and abetted with Dolby Vision. The image features way above average sharpness, very good color levels (the reds in those vibrant chairs in the lounge are rich but never bloom), and solid fine details as in wallpaper textures which are occasionally quite visible. The overall image appears brighter than one remembers and is virtually spotless. The interwoven herringbone, tweed, and corduroy jackets don’t cause the slightest line twitter or flashing in the image. Black levels are appropriately deep but maybe not quite as dark as they might have been while the abundance of white levels due to all the snow is handled beautifully with Dolby Vision not making things look unnaturally bright. Flesh tones are a major improvement in this new UHD transfer, now much more lifelike and less red than in earlier transfers. The movie has been divided into 40 chapters.

The only English audio choice is a DTS-HD Master Audio 5.1 remixed track. The original theatrical mono is no longer a choice for the listener. While the audio’s mono origins occasionally reveal themselves in scenes where modern mixes would have noticeable surround but this mix doesn’t, the 5.1 soundtrack allows the creepy music and chilling audio effects to greatly enhance the effectiveness of the film’s many shocking moments. Problems in earlier transfers with stifled looped dialogue have been eliminated here, and the dialog in the center channel is clear. There are no age-related problems with hiss or other anomalies.

Almost all of the bonus features from the last Blu-ray release have been carried over to this 4K release. The theatrical trailer is missing.

Audio Commentary: a combination of comments from Steadicam inventor/operator Garrett Brown and Kubrick biographer John Baxter. It’s an informative though slightly dry recital of information about the making of the film and for fans of the movie is quite an engaging listen. This is available on both the package’s UHD and Blu-ray discs.

All of the other bonus features are only on the enclosed Blu-ray disc.

View from the Overlook: Crafting The Shining (30:22, SD): a standard “making of” featurette featuring comments from the movie’s camera operator, writer, production designer, costumer, producer, and star (Nicholson) looking back on their experiences of working on the movie.

The Visions of Stanley Kubrick (17:17, SD): a discussion of Kubrick’s background as a still photographer and how that influenced his camera eye in the making of his films.

The Making of ‘The Shining’ (34:59, SD): Stanley Kubrick’s daughter Vivian Kubrick’s filmed documentary made during the production of the film. Along with the movie is a running commentary by Ms. Kubrick looking back on her (then) 27-year old effort and making some astute comments on the people involved and her own sometimes clumsy attempts at making this film.

Wendy Carlos, Composer (7:31, SD): the composer plays some music from both The Shining and A Clockwork Orange, most of which didn‘t make it into the final films.

Stanley Kubrick’s examination of the pervasiveness of evil and the disintegration of a family from that evil finally gets its best-ever video release with this UHD presentation of The Shining. For fans of the movie, it’s a must-buy. It’s never looked or sounded better. 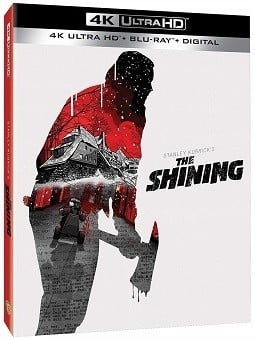