Forum List What's new Dark Style Change width
Log in Register
What's new Search
Menu
Log in
Register
Navigation
Install the app
More options
Dark Style
Close Menu
Posted on October 5, 2019 by Robert Harris
You are using an out of date browser. It may not display this or other websites correctly.
You should upgrade or use an alternative browser.
4 Stars

With no negativity toward Midsommar, that viewing needed an antidote, and Yesterday did the trick.

A fantasy, about an odd natural world event that changes certain attributes of history — inclusive of virtually anyone recalling a group called The Beatles, or their songbook.

As directed by Danny Boyle, the endeavor works, with a single exception – at least to my mind.

Kate McKinnon is included in the cast, and while she can be superb in short TV comedy sketches, she seems unable to act with any serious purpose. Her switch is set to overkill/loud at all times, and it’s a scene destroyer.

Other than that, an interesting take on an alternate universe.

As a 4k Blu-ray, it’s the real thing, having been shot in 8k, with a 4k digital master.

And a great deal of fun.

Robert Harris said:
With no negativity toward Midsommar, that viewing needed an antidote, and Yesterday did the trick.
Click to expand...

I’m a little skeptical of almost all new movies nowadays but this might be worth a look.

I watched this movie early today and already commented in the movie topic for Yesterday.

Love love loved this movie.
It’s now one of my favorite movies I’ve ever seen.
A beautiful love story.

Peg and I watched Yesterday a few days ago and enjoyed it immensely. I tend to think most of that is due to the efforts of Richard Curtis.

Big props to Himesh Patel and Lily James for doing fantastic jobs in their roles, too.

I loved this film, but it only works if you don't think too hard about it because had there been no Beatles, one could argue that due to their influence, much that followed both musically and culturally wouldn't have happened either. If there had been no Beatle haircuts, would there have been hippies?

I also loved those little throwaway quirks of other things that didn't exist in this world. I thought Kate McKinnon was fine in this role - she was overbearing, but if you've ever met many record company execs, that's exactly what many are like, only worse.

(If one wants to get really obsessive about it, because you have this one guy, sometimes with backup, playing The Beatles' music, it doesn't take into account George Martin's production, which IMO contributed greatly to their success. And in the film, the music is accepted and loved pretty quickly, but in reality, when The Beatles were first played on U.S. radio, it was a failure. It took the Capitol Records publicity machine to crank up interest in the group. "My Bonnie", the record they did with Tony Sheridan, was released in the U.S. in 1962. "Love Me Do" and "Please Please Me" were released in February of '63, "From Me to You" in May, "She Loves You" in September and "Roll Over Beethoven" in December and none of them made the charts. The Beatles didn't hit the Billboard charts until the week of January 18th and then the build-up to the Ed Sullivan show in early February solidified their success, but even they thought it wouldn't last. Ringo talked about opening a hairdressing shop once The Beatles were over.)

Kyrsten Brad said:
I’m a little skeptical of almost all new movies nowadays but this might be worth a look.
Click to expand...

I'm in the same boat as you and enjoyed this one. And I agree with Robert 100% on McKinnon's performance. I love her on SNL but something was off in this movie with her. I still enjoyed the film though, which is more than I can say for most other new movies.

No classic, but superbly shot and scored and you can't argue with a positive good feeling movie. I like that the twist with the two strangers is essentially the same as the message of the movie - the world is better for having these songs and feelings no matter who they came from (but the Beatles helps!)

Still, re-watch Across the Universe to see an absolute timeless classic using the same songs.

I just received my 4K disc today so I plan on watching it later today.
You must log in or register to reply here. 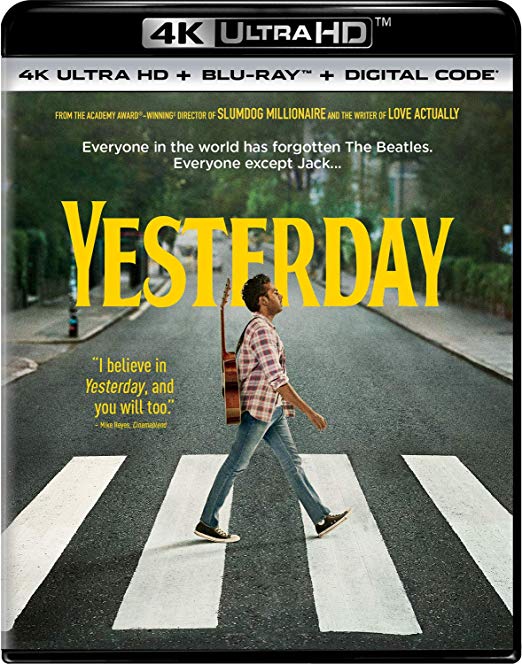