The Predator offers up a zip and energy to the franchise, and while the lean efficiency of the 1987 original is missed, the lighter nature of this sequel does work in its favor from time to time, especially as a way to distinguish itself. Callbacks to the original tend to be limited and the film tries to take the franchise in a new and interesting direction. Sadly, the execution doesn’t end up working. Sure, Shane Black’s direction is quite effective, the visual effects top notch, the actors largely good, and the ideas full of potential, but all that isn’t enough to overcome the films plentiful weaknesses and in a way, The Predator feels like it was filmed before the script was finished (or before the best version of the script was finished).

“I think they’re attempting hybridization. They’re upgrading on every planet they visit.”

A predator ship crash lands on earth in a jungle region (having been chased and damaged by another predator ship), and the alien is captured by a government team lead by a man called Traeger, but not before a deployed American sniper snatches some of his tech and ships it home as protection. The shipment, meant to be a safeguard should the government try to cover up the existence of the crashed alien craft, falls into the hands of the soldier’s autistic son who is able to crack the alien tech. The captured alien escapes, the other pursuing alien shows up, the kid gets the alien tech working, and the soldier, being stuffed away by the government, winds up on a bus with a collection of damaged veterans on his way to a likely deadly fate when they cross paths with the predator.

Director and co-writer Shane Black jumps back into the Predator world with a sense of abandon. Having made script adjustments while playing the quickly dispatched Hawkins in the 1987 original, Black soon after made it big as a screenwriter. He made a splash with the original Lethal Weapon, even becoming the highest paid screenwriter in tinsel town with The Last Boy Scout and then The Long Kiss Goodnight.  Then, after disappearing for a while, Black showcased a strong directorial hand with the criminally under-seen Kiss, Kiss Bang Bang, and has since shown a command of massive productions in Iron Man 3 and of clever period comedy-thrillers in The Nice Guys. In other words, he’d earned considerable goodwill for the moment he stepped back into the world of Predator.  Here’s a man, working with writing partner Fred Dekker, who had everything going for him. What a surprise, then, that The Predator is a mess and a disappointment.

Boyd Holbrook leads the cast as Quinn McKenna, the resourceful sniper who gets tangled up with the alien, stealing his technology. His good ol’ boy and witty pep make him likeable from the get, and he’s effective with the physical demands of the role. The rag-tag team he meets by chance on a bus features the very, very good Travante Rhodes as Nebraska Williams, funnyman Keegan-Michael Key as Coyle, wasted Thomas Jane as Baxley, underwritten Alfie Allen as Lynch and likeable Augusto Aguilera as Nettles. Fine young actor Jason Tremblay is Rory McKenna, underused Yvonne Strahovski and Rory’s mum, Emily, and the somewhat miscast Olivia Munn as Casey Brackett, the scientist called up by the ‘government’ when a live predator is captured. The odd-ball collection of characters suits the tone Black is aiming for, even if this collection is missing the needed dramatic edge to give a layer the film so desperately needs. While there is some quieter character moments working in the film’s favor, particularly between Quinn and Rhodes’ Williams, along with moments that approach emotional resonance between Quinn and his son, these moments skate by quickly and aren’t built upon to anything satisfying.

Fault-filled and flawed, there are still things to enjoy in The Predator. The story here entertainingly expands the playground for one of the universes deadliest hunters, and the interactions between characters is playful and fun, with the hodge-podge of emotionally damaged military types finding themselves falling into interesting grooves. The brisk pace and some inventiveness in the action sequences is another plus, but the overall film is almost fatally undone by some important elements.

The first is problem is with the editing. Scenes aren’t allowed to breathe, and the abrupt cuts at the end of scenes suggest bits were excised for pacing or some other reason. It’s awkward and noticeable, something editing needs not to be. The second is Sterling K. Brown as Traeger. A terrific, appealing actor who is so often fascinating to watch (particularly his sense of vulnerability), but here, his character as written and performed, is an aggravating, one-note, cartoon villain. The best villains, regardless of genre and regardless of story, demonstrate dimensions, existing in the greys of moral repose, or at the very least, work to have us understand or sympathize with their view. Brown’s Traeger is a gum-chewing, flippant caricature that makes no attempt to be likeable and so, unsurprisingly, isn’t likable in the slightest.  The final flaw is a much deeper problem. The Predator touts DNA with the first two films (lightly, mind), but fails to become a film worthy of that DNA connection because it either doesn’t know what it really wants to be, or it knows, but isn’t able to ever get there. Black’s penchant for snappy dialogue is always fun, and the cast of actors assembled do well with that snappiness, but humor without drama and without tension, especially in a film like this, robs the film of balance and a meaningful destination. It’s empty.

I liked the adventurous nature of The Predator. I liked the exploration of forced hybridization of the Predator species, and I liked the brazen energy that runs through almost every frame of this film. It isn’t, however, enough to overcome the forces working against it. A shame, since the failure of The Predator critically and at the box office would seem to have laid to rest any chance at a future franchise for one of cinemas greatest aliens. In fairness, that great alien hasn’t really been well served on the big screen since his big screen debut in 1987. It seems no-one can figured out how to do this fascinating species justice anymore.

Filmed on Arri Alexa cameras, The Predator on UHD is a crisp, lavish affair replete with deep reds, blues and greens and a stunning clarity pervasive throughout. A number of key sequences taka place at night, including the first sequence on earth, and the black levels are deep without sacrificing details.  The HDR10 grading here is especially helpful in giving the deep colors a vivid pop and dimension. Contrast is equally superb.

While the action in the jungle and the special military lab are good examples of the quality of this release, consider the level of detail and color found in the classroom sequence that introduces Jacob Tremblay’s character. The level of detail, the contrast of bright colors on the walls against the white, the chess boards and pieces is terrific.

Fox brings The Predator home on the 4K UHD with a Dolby Atmos track (that will default to Dolby TrueHD 7.1 if not Atmos equipped). The audio is a winner. Dynamic use of the surrounds and a rambunctious exploitation of the subwoofer with heavy use of low frequency effects during action sequences (the action aboard the alien craft being perhaps the best). Henry Jackman’s score evokes Alan Silvestri’s classic original music from 87’s Predator without being beholden to it, and it sounds excellent as presented here (it’s just an okay score, however).

There are zero special features native to the 4K disc, with all the extras to be found on the accompanying Blu-ray included in this set. What we have on the Blu-ray disc is about an hours’ worth of extras that include a small collection of deleted scenes, a look at the evolution of the Predator species, and a diversion into Shane Black’s connection to the Predator universe.

There’s nothing particularly deep or revealing, but mildly interesting for fans of the film.

A Touch of Black

There are some good ideas to be found in The Predator, and a sense of abandon and playfulness that had the potential to give a newfound sense of cinematic purpose for the impressive alien creature. However, there’s too much saddling the film from finding its balance, with no real drama or earned thrills to bounce against the funny. Though briskly paced and exciting at times, it feels rushed and unsatisfying. An okay diversion, but nothing worthy of the Predator legacy.

Great review Neil and I agree with your onion of the film. And I still bought it!
Reactions: Neil Middlemiss

Ha. Onion. I meant opinion of course but in a strange way onion works.

In onion, there is strength.
Reactions: Tino

Thanks for the review, It's not as good as the Predator or even Predator 2, but I liked it more than you as I enjoy the comedic moments with the oddball characters.

Robert Crawford said:
Thanks for the review, It's not as good as the Predator or even Predator 2, but I liked it more than you as I enjoy the comedic moments with the oddball characters.
Click to expand...

Was this a 3D movie?

Johnny Angell said:
Was this a 3D movie?
Click to expand...

Being a huge fan of all the previous Predator films (Predator 1 & 2, Predators, Alien Vs. Predator 1 & 2), I had high expectations for The Predator. I finally saw this on Blu-ray earlier this year, and felt the movie was just OK. The action scenes were solid, but it had way too many comedic elements for a serious sci-fi thriller. I also felt the casting was poor. Too bad, since I'm typically a huge fan of Shane Black films, and have really enjoyed some of his others (The Long Kiss Goodnight; Kiss Kiss Bang Bang; The Nice Guys).

I'm becoming very sensitive to studio interference in film, and this one has it all over the place. I still enjoyed it for what it was, but didn't think much about it afterwards.

Yeah, I bet you the Shane Black wanted it to be more violent and perhaps have more dark comedic moments in it.

I love the original Predator, still enjoy Predator 2, and tolerated Predators, but The Predator was just a lousy film IMO. I may watch it once again just make sure I wasn't having a bad night, but it is the worst movie of the four by a large margin as far as I'm concerned. Studio interference may well be at play here, but I expected a lot more from Shane Black. Barely 2 stars out of 5 for me.
Reactions: SAhmed
You must log in or register to reply here.
Share:
Facebook Twitter Reddit Pinterest Tumblr WhatsApp Email Link 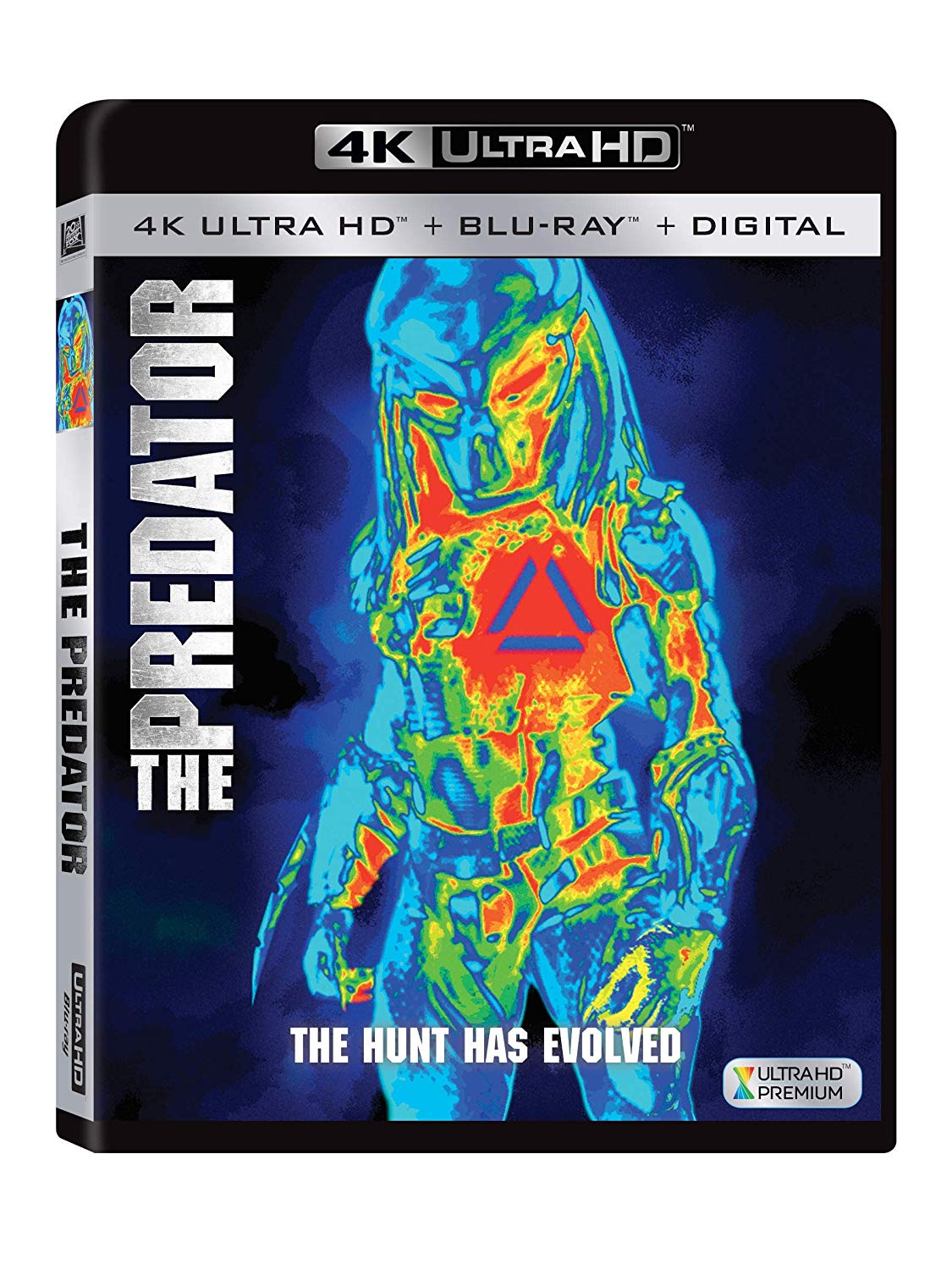