Forum List What's new Dark Style Change width
Log in Register
What's new Search
Menu
Log in
Register
Navigation
Install the app
More options
Dark Style
Close Menu
Posted on December 26, 2018 by t1g3r5fan
You are using an out of date browser. It may not display this or other websites correctly.
You should upgrade or use an alternative browser.
Decent release of Michael Caine thriller 3 Stars

Don Siegel had a very solid run during the 1970’s, especially his four collaborations with Clint Eastwood, which – of course – yielded the iconic Dirty Harry (1971). Coming in at the middle of the decade, The Black Windmill is a slickly made and well-crafted thriller that was mostly dismissed by both critics and audiences upon first release. Now, Kino has resurrected the movie on Blu-ray as part of their Studio Classics line.

The world of British intelligence officer Major John Tarrant (Michael Caine) is turned upside down when he finds out that his son David has been kidnapped and being held for ransom by a mysterious man known only as Drabble. The demand is simple: half a million pounds in uncut diamonds in exchange for little David’s life. Tarrant tries to get his superiors in MI6 (Donald Pleasence & Joseph O’Conor) involved, but it soon becomes clear that he can’t even trust them, especially when they suspect that Tarrant may have arranged the whole thing. Seemingly on his own, Tarrant vows to rescue his son and flush out the men responsible, leading to a tense climax at the Clayton Windmills.

Coming in on the wake of the success of The Day of the Jackal and the critical success of Charley Varrick a year prior, The Black Windmill was an attempt by director Don Siegel and the producing team Richard D. Zanuck and David Brown to capitalize on Jackal’s success by filming a suspense story in Europe and having Michael Caine in the lead. However, when it was released, it missed the mark with both audiences and critics alike. Despite the fact that it’s well-made, the major fault of the film is that – outside of a few well-staged pieces of action – it’s mostly static in terms of suspense. While some films and directors can get away with a movie being proficient in dialogue compared to straight up action – see Michael Winner’s Scorpio (1973) for a good example – Siegel is clearly at a disadvantage here in that department; too often the film keeps us at an emotional arm’s length – not necessarily a great quality when dealing with a story about a kidnapped child. Yet, in spite of that, the movie is still eminently watchable, even though it pales in comparison to some of Siegel’s earlier efforts.

As the lead, Michael Caine is solid as Major Tarrant; it’s the kind of role that he has excelled at often in his career, although he looks a little too calm in dealing with his son’s abduction. As his immediate superior at MI6, Donald Pleasence easily has the best performance of the film; his combination of a fastidious nature and a bit of levity brings some needed relief to some of the more slower portions of the movie. In the part of the head of the gang of arms smugglers and main conspirator, John Vernon makes the most of his time on the screen, adding to his list of villainous appearances on the screen. Still relatively fresh off her Oscar nominated turn in Nicholas and Alexandra (1971), Janet Suzman is convincing as Tarrant’s estranged wife, counterbalancing Caine’s rather stoic nature in the event of the kidnapping. Other notable appearances include Delphine Seyrig as an ill-fated member of Drabble’s gang, Joseph O’Conor as the MI6 head with a secret, Joss Ackland as the police superintendent, Catherine Schell as the wife of O’Conor’s MI6 director, Hermoine Baddeley in seemingly a credited cameo appearance as a friend of the Tarrants, and – in an uncredited appearance as a phony MP at the beginning of the film – John Rhys-Davies.

The film’s original 2:35:1 aspect ratio is preserved on this release, making it the first time the film has been seen this way on home video. For the most part, film grain is organic and sturdy along with the color palette; there are some noticeable fluctuations in those when it comes to some of the night scenes, though, but not really enough to pull one out of viewing. Age related artifacts are also few and relatively minor; overall, this is probably the best the film has looked on home video.

The original mono soundtrack is presented on a 2.0 DTS-HD Master Audio track for this release. Dialogue is strong and clear, with some ambiance given to Roy Budd’s great score. Instances of age related artifacts, such as popping, crackling or hissing, are minimal; again, this is probably the best the film has sounded on home video.

Commentary by filmmaker Mike Siegel – The filmmaker analyzes the film and its production in this informative track. One slight quibble though: it would’ve helped to have the personal introduction right at the beginning of the track rather than seven or ten minutes into it.

Ousama Rawi interview (18:12) – The film’s cinematographer recalls his experience on the production, including the challenges of setting up and shooting on the hovercraft.

Image Gallery (10:22) – A series of black and white and color stills from behind-the-scenes, promotional material, and the production backed by selections from Roy Budd’s score.

The package also contains a reversible cover that has both the original poster art for the original US and International release of the movie.

While not top-tier Don Siegel or Michael Caine, The Black Windmill is still a solid and well-crafted thriller, warts and all. Kino has done a good job in reviving the movie for Blu-ray, with solid marks for both audio and video, as well as a couple of informative bonus features. Fans of the director, star, or film will be pleased to know that this presentation of the movie is likely the best one will encounter on the home video market.

Thank you for the review Mychal. I agree with your thoughts on The Black Windmill. I have seen the film a number of times over the years and it has grown on me. I always enjoy Michael Caine and find Janet Suzman a good screen presence.
You must log in or register to reply here. 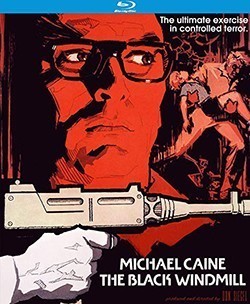