Forum List What's new Dark Style Change width
Log in Register
What's new Search
Menu
Log in
Register
Navigation
Install the app
More options
Dark Style
Close Menu
Posted on June 23, 2019 by t1g3r5fan
You are using an out of date browser. It may not display this or other websites correctly.
You should upgrade or use an alternative browser.
Final Hammer Dracula film debuts on Blu-ray 4 Stars

After a very successful run during the 1960’s, Hammer Films began to run into trouble in the 1970’s; fortunes were not what it used to be, as the market was saturated with rival companies in the horror trade and the company was in threat of going under. Seeking to boost their fortunes, Hammer teamed up with Warner Bros. and the Shaw Brothers of the Hong Kong film industry to help finance a couple of projects; one of the two projects was The Legend of the 7 Golden Vampires, a melding of Hammer’s classic Dracula movies with the lucrative kung fu genre that was booming following the success of Enter the Dragon (1973). Previously released on DVD by Anchor Bay, Shout Factory – through the Scream Factory label and their deal with the modern Hammer Films – has revived The Legend of the 7 Golden Vampires for its Blu-ray debut.

While teaching in Chungking in early 20th Century China, Professor Van Helsing (Peter Cushing) learns of a village in neighboring Szechuan Province that has been overrun by the legendary 7 golden vampires for nearly a century. Most of the locals dismiss and scoff at Van Helsing’s suggestion that the legend is real, but one of his students, Hsi Ching (David Chiang), not only believes him, but tells him that it’s all true – his grandfather had tried in vain to stop the vampires years before. Now, Hsi Ching and his siblings, along with Van Helsing and his son (Robin Stewart) and a wealthy widow (Julie Ege) decide to take on a dangerous trek to the village to face off against the golden vampires; however, waiting at the end is a fight to the death that will bring Van Helsing face to face with an old foe: Count Dracula!

Before crossovers became common in today’s moviemaking, The Legend of the 7 Golden Vampires represented something of a rarity – a mix of two distinctive genres into something new and different (which was reflected in the original advertising for the movie). The production itself reflected the combination of East and West styles, as Roy Ward Baker and an uncredited Cheh Chang directed the film’s heady mix of kung fu and Gothic style. Despite some issues with the language barrier during production as well as a contrast of styles, there are several great moments throughout the film; the scenes where the undead rise at the beckoning of the possessed high priest ranks among Hammer’s most effective – they can certainly hold their own against similar scenes in the company’s earlier The Plague of the Zombies. While the end result may not have kicked started a Hammer renaissance as it creators hoped, it has managed to survive as a highly entertaining effort and a final gasp of glory for the Hammer Horror genre in its waning days of the 1970’s.

In what would be his final turn as Van Helsing, Peter Cushing is reliable and remarkable as the famed doctor, now dealing with a culture clash in his fight against the dark forces. Relatively fresh off of winning Best Actor awards for Vengeance (1970) and Blood Brothers (1973), David Chiang manages to balance action as well as pathos in his part of Hsi Ching; he also played the part of Ching’s grandfather in the flashback sequence explaining the golden vampires. Succeeding the legendary Christopher Lee as the infamous Count Dracula, John Forbes-Robertson manages to acquit himself well despite the garish makeup used for his character; his voice was dubbed by an uncredited David de Keyser. Robin Stewart is effective as Van Helsing’s son while Julie Ege fills the Hammer Glamour part as the wealthy widow who comes along for the ride. Other appearances worth mentioning are Shih Szu as Ching’s sister who falls in love with the younger Van Helsing, Lau Kar-wing as the archer of the group, Wang Chiang in the dual part of the twin swordsmen, Huang Pei-Chih as the spearsman of the brothers, and Chan Shen as the High Priest who becomes the vessel for Count Dracula to continue his reign of terror outside of Transylvania.

The original, uncut 89 minute version of the movie is presented in a new HD transfer taken from a 2K scan of the original film elements. Film grain is organic, with density sometimes shifting from scene to scene, and fine details coming through strongly; color palette is also strong, with few instances of age related issues like dirt, speckling, print damage, etc. Overall, this transfer is an improvement over the Anchor Bay DVD and likely represents the best the film has looked on home video.

The original mono soundtrack is presented in a DTS-HD Master Audio track for this release. Dialogue is strong and clear along with the sound effects and James Bernard’s score, which has depth, fidelity and clarity. There’s hardly an instance of age related problems like distortion, crackling, hissing, or popping, making this likely the best the movie has ever sounded on home video.

Commentary by author/film historian Bruce G. Hallenbeck – Recorded for this release, Hallenbeck goes over the film’s production history and other interesting anecdotes; it’s a very insightful and entertaining track to match the movie.

When Hammer Met Shaw: An Interview with David Chiang (6:38) – Recorded for a separate home video release, this excerpt has the star recalling his time on the film, including working with Peter Cushing; the interview is presented in Japanese with English subtitles.

Kung Fear: An Interview with Rick Baker (19:39) – Newly recorded for this release, the Hong Kong film expert goes over the film and even shares a few personal memories of how he first encountered the movie.

The 7 Brothers Meet Dracula (Alternate U.S. version) – The 75 minute version of the movie, released in the U.S. in 1979 for the drive-in circuit, is presented here as a bonus feature in HD with standard definition inserts.

The Legend of the 7 Golden Vampires Trailer (2:54)

Not carried over from the Anchor Bay DVD is the 46 minute narration of the film’s story, originally recorded for soundtrack release, by Peter Cushing.

The Legend of the 7 Golden Vampires not only represents – likely – the best Hammer effort of the 1970’s, but an entertaining coda to their series of Dracula films. Shout Factory has continued their great run Hammer release with another solid job here; not only does the picture and audio quality surpass previous home releases, but the addition of new special features – including the infamous alternate version – makes this an easy upgrade.

It has been many years since I watched this last. The video quality is great. I also like the reversible cover art.

First bought it as a non-anamorphic DVD, then anamorphic. I like the movie but not likely to triple dip on this title.

I missed this review when you first posted it: well done. As a longtime Hammer fan it’s certainly a bizarre production, but there are moments that really work. Very enjoyable for fans.
You must log in or register to reply here.

Today at 8:03 AM
Robert Crawford 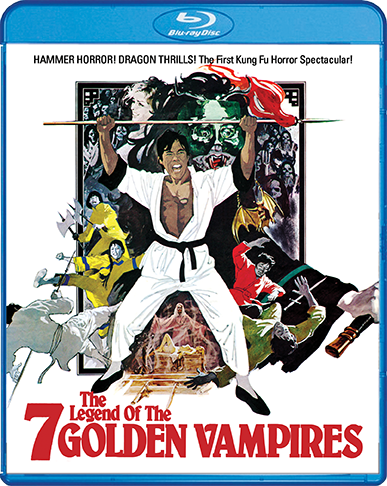