While Hammer Films is probably better known today for their takes on the classic movie monsters Dracula and Frankenstein, they also extended their reach into chillers of different kinds. Perhaps the most notable (and underrated) of these excursions is 1966’s The Plague of the Zombies, the company’s first and only full-fledged entry into the zombie subgenre that predated George Romero’s groundbreaking Night of the Living Dead by a couple of years. Previously available in the states on DVD, Shout Factory has resurrected the movie onto Blu-ray via their Scream Factory label.

A mysterious plague is tearing through a small village in Cornwall, one in which victims are dying at an alarming rate without any logical explanation for it. At a loss, the local doctor, Peter Tompson (Brook Williams), requests the help of colleague Sir James Forbes (Andre Morell) to discover the cause of the plague. Upon further investigation, they find that the coffins of those who died from the mysterious plague are empty, and that undead figures are wandering around an abandoned tin mine on the estate of village squire Clive Hamilton (John Carson). However, the investigation is about to hit too close to home, as Sir James’ daughter Sylvia (Diane Clare) may end up being the next victim…

Made as part of their distribution deal with 20th Century Fox, and shot back-to-back with another Hammer chiller, The Reptile (1966), The Plague of the Zombies should be seen as a highly atmospheric movie that bridges the zombie subgenre between the classic take of the trance-like, mindless zombie and the modern flesh-eating depiction brought forth by George Romero just a few years after the release of this movie. As one of his best efforts behind the director’s chair, John Gilling sets up a great atmosphere and executes it with great style, resulting in a couple of memorable sequences – the graveyard nightmare sequence immediately comes to mind. Mix in the contributions of some of Hammer’s regular collaborators – composer James Bernard, cinematographer Arthur Grant, production designer Bernard Robinson, art director Don Mingaye, and makeup artist Roy Ashton, to name a few – and the result is one of their most notable efforts outside of the usual suspects (their takes on Dracula, Frankenstein, and the Mummy).

Appearing in his sixth of eight Hammer films, Andre Morell casts a memorable impression as Sir James Forbes, the man of science who comes realize that black magic can be just as powerful as scientific fact. Cast in the villainous part, John Carson leaves and indelible mark as the mysterious squire; the combination of his saturnine appearance and a voice remarkably similar to James Mason lends itself very well to the role. Even though her part lasts only for several minutes, Jacqueline Pearce makes the most of her role as the wife of Dr. Tompson, who ends up a victim of the zombie plague with an equally memorable demise. Diane Clare gives a solid performance as Sir James’ strong-willed and independent daughter – even though her voice was dubbed by another actress; Brook Williams is decent as Dr. Tompson, the man caught in the middle of all the unearthly madness. Other noteworthy performers include Hammer favorite Michael Ripper as the sergeant, Alexander Davion as the leader of the young bloods in Squire Hamilton’s steed, Roy Royston as the local vicar, and Ben Aris as one of the zombies encountered by Sylvia with a memorably creepy moment at the abandoned tin mine.

The original 1:66:1 aspect ratio is preserved in this transfer, presumably the same one used for the 2013 StudioCanal Blu-ray release. Colors are strong, with even skin tones and fine details faithfully rendered. Grain is consistently sturdy with only minor instances of fluctuation, dirt, dust, and speckling, among other age related artifacts. Considering that the original elements weren’t in great shape, this transfer easily represents probably the best the movie has looked on home video.

The original mono soundtrack is presented on a DTS-HD Master Audio track. The press release for the movie touted this as “newly restored”, probably referring to the fact that the previous StudioCanal Blu-ray used a stereo track for their release rather than the original mono track. Anyway, dialogue is strong and clear along with the sound mix, and James Bernard’s effective score is given great fidelity as well. All in all, this the best the movie has sounded on home video.

Commentary by filmmakers Constantine Nasr, Ted Newsom, and film historian Steve Haberman – One of two newly recorded commentary tracks for this release, the trio go over some of the details of the film’s production.

Commentary by author/film historian Troy Howarth – This second track has a more detailed history of the movie and its production, filling in some of the details missed over by the previous track.

Raising the Dead: The Making of The Plague of the Zombies (35:27) – Carried over from the StudioCanal Blu-ray, this 2012 featurette goes over the production as well as a brief bit dedicated to its restoration. Among those interviewed are actors John Carson and Jacqueline Pearce, art director Don Mingaye, Hammer historian Marcus Hearn, authors Mark Gatiss, Jonathan Rigby, David Huckvale, Wayne Kinsey, and restoration supervisor Jon Mann.

Restoration Comparison (3:37) – A brief before and after comparison of the movie unrestored and restored.

Still Gallery (7:10) – Several production, behind-the-scenes, color, black and white, and promotional stills are presented here, some of them provided for this release by Brett Cameron.

Originally the B feature in a double bill released here in America, The Plague of the Zombies has gone on to have a nice afterlife as a memorable movie in the Hammer canon as well as the zombie genre. Shout Factory’s Blu-ray release should definitely aid in the rediscovery and reappraisal of the movie, with a solid transfer as well as carrying over existing special features with two new commentaries in addition to preserving the original soundtrack. Easily an upgrade over the old Anchor Bay DVD and the StudioCanal Blu-ray.

I'm really impressed with this transfer, and agree with your review.
Reactions: t1g3r5fan
You must log in or register to reply here. 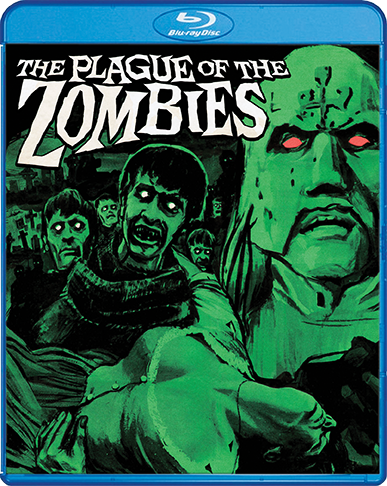