Forum List What's new Dark Style Change width
Log in Register
What's new Search
Menu
Log in
Register
Navigation
Install the app
More options
Dark Style
Close Menu
Posted on September 15, 2019 by Matt Hough
You are using an out of date browser. It may not display this or other websites correctly.
You should upgrade or use an alternative browser.
Comic caper film is a cinematic masterwork. 4.5 Stars

One of the cinema’s great masterworks, Charles Crichton’s The Lavender Hill Mob is still just as much a delight today as it was when it was released sixty-eight years ago.

The most unconventional caper comedy ever produced also emerges as one of the greatest comedies in the history of international cinema – Charles Crichton’s The Lavender Hill Mob. Filled to the brim with a drolly clever narrative, performances that explode with precocious merriment, and inventive direction that goes from tidy to breathlessly madcap, The Lavender Hill Mob really does belong in a class by itself.

Meek treasury officer Henry “Dutch” Holland (Alec Guinness), his artistic buddy (Stanley Holloway), and two kindly fellow crooks (Alfie Bass, Sidney James) hatch a scheme to steal a million pounds worth of gold bullion and then melt the hijacked Bank of England gold into Eiffel Tower paperweights. While much about the scheme goes wrong, the crooks still manage to pull off their heist only to find differing priorities and a series of misfortunes putting their escape into real jeopardy.

T.E.B. Clarke’s Oscar-winning original screenplay never ceases to amaze with its cleverness and audacity in plotting and execution with the story mostly told in flashback. The idea itself of melting the gold into souvenir statuettes comes together bit by bit, allowing the viewer to figure it out along with the film’s meek protagonist, but its real brilliance arrives later when a series is misfires and miscues during and after the theft put the quartet in jeopardy, then lets them escape, then puts them in jeopardy again finally needing to engage in a couple of the most madcap chases in the history of movies: first as the duo dashes after some youthful British tourists armed with their gold towers through marvelous slapstick encounters at customs and later at a police exhibition (with no end of sight gags) culminating with a madcap dash through London with the clever Holland misleading the gullible police in numerous fun ways. Director Charles Crichton has plenty of opportunities to stage and shoot creatively, but you’ll likely be dazzled by the uproarious skitter down the winding steps of the Eiffel Tower, and the frantic climactic chase between cops and robbers.

Chameleon Alec Guinness is a wonder as the mousy but always thinking Holland, continually slyly smiling as he goes about his business. The performance earned him his first Oscar nomination, and you’ll see why as he transforms from a meek innocent to a man-about-Rio in the film’s opening and closing sequences. Stanley Holloway as his obedient lackey also scores in a major way throughout the movie. Their two fellow thieves played by Sidney James and Alfie Bass couldn’t be more appealing or amusing partners-in-crime (just watch the lumbering James milk his scenes learning to ride a bike or munching on a sandwich while waiting for a robbery scene to clear). John Gregson gets some prime screen time later in the movie as the police detective who slowly catches on to the robbers’ identities, while Marjorie Fielding as the stars’ rule-enforcing landlady and Edie Martin as a quiet matron with a taste and the lingo for crime fiction make memorable impressions. If you don’t blink, you won’t miss one of Audrey Hepburn’s earliest film appearances close to the film’s beginning, and you’ll also see Desmond Llewelyn and Robert Shaw in brief appearances later on.

The film’s original theatrical aspect ratio of 1.37:1 is faithfully rendered in this 1080p transfer using the AVC codec. Images are sharp and detailed, and the grayscale is quite impressive with solid black levels and whites that don’t bloom. There are a few random scratches along the film’s left frame edge, but those seem to be the only marks of age on this transfer. The main menu doesn’t have a chapter index, but the movie has been divided into 8 chapters.

The DTS-HD Master Audio 2.0 mono sound mix sounds era-appropriate. While the sound is not always full-bodied and sometimes seems a little thin in places, the dialogue, sound effects, and the delightful Georges Auric background score have all been blended together nicely. Age-related artifacts like hiss, hum, flutter, and crackle have been eliminated making for a clear listening experience.

Audio Commentary: film historian Jeremy Arnold offers an outstanding commentary on the movie giving us background information on all of the key personnel before and behind the camera and pausing occasionally to point out some clever bits of dialogue or notable screen imagery.

Good Afternoon (25:46, SD): Mavis Nicholson interviews screenwriter T.E.B. Clarke about his early schooling, his years as a journalist, and his career as a screenwriter with occasional breaks to watch clips from some of his movies.

Audio Interview with Charles Crichton (12:23): the director of the film talks about his early years before entering the movie business and his great success with The Lavender Hill Mob.

Kino Lorber Trailers: Kind Hearts and Coronets, The Man in the White Suit, The Captain’s Paradise.

One of the cinema’s great masterworks, Charles Crichton’s The Lavender Hill Mob is still just as much a delight today as it was when it was released sixty-eight years ago. This Kino Studio Classics release of Studio Canal’s beautiful transfer is most highly recommended.

One of my favorites from Ealing and a great performance from Alec Guinness.

I absolutely love this film! Thank you for the in-depth review, Matthew.
You must log in or register to reply here. 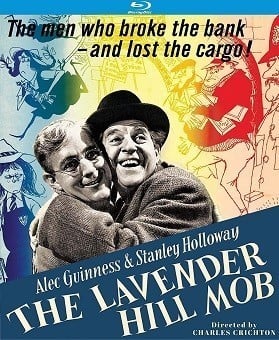