By the end of the 1970’s, German director Rainer Werner Fassbinder had already made at least 2 dozen films and TV series and had established himself as a major voice in the New German Cinema movement. However, he was to embark on one of his most ambitious projects – The BRD Trilogy – a series of three films focused on three different women set in the years following World War II and the economic miracle that West Germany was going through. Previously released by Criterion on DVD, they’ve brought the series back into print with a Blu-ray upgrade.

(Note: the rating above is for the collective value of the three films; see each one below for the individual ratings.)

In the waning days of WWII, Maria (Hanna Schygulla) marries Hermann Braun (Klaus Lowitsch) before he subsequently disappears after “a day and a half” of marriage. Having to start anew, Maria uses everything at her disposal, including her own body, to survive the post-war landscape; eventually, she manages to get into the life of an aging businessman (Ivan Desny) and become his personal assistant as well as his mistress. However, her devotion to Hermann is unwavering, even at the risk of losing everything.

During the height of the Third Reich, Veronika Voss (Rosel Zech) was a beloved starlet rumored to have ties with Goebbels. Flash forward to 1955, Veronika is living in obscurity in Munich, until when sportswriter Robert Krohn (Hilmar Thate) meets her by chance and the two strike up a casual relationship. As their bond forms, Robert learns more about the truth behind Veronika’s decline and soon finds out that the final act is about to be written and may just mirror one of Veronika’s own movies!

In the small town of Coburg, Lola (Barbara Sukowa) is a popular singer in the main brothel in town, but has ambitions of seeking the good life. She thinks she found her ticket in the new building commissioner (Armin Mueller-Stahl), who arrives to clean up the corruption running rampant in town. Soon, however, Lola finds herself pitting the object of her newfound affection with the corrupt contractor (Mario Adorf) that could lead the commissioner into the corruption he’s trying to get rid of!

For each of the films, director Rainer Werner Fassbinder used a mélange of different genres and influences to tell the stories of these three different women. Maria Braun relied on the Women’s Pictures of 1940’s Hollywood (Mildred Pierce certainly comes to mind) to show how our main character rises to prominence in the Economic Miracle. Veronika Voss utilized black and white as an homage to the UFA melodramas of the 1930’s to help make a scathing satire on the collective amnesia the German people had on their country’s infamous past. Finally, Lola paid homage to The Blue Angel as well as the movies shot in three-strip Technicolor – through the use of a very stylized color palette – to create a satire on corruption and capitalism in the wake of the Economic Miracle that’s both gripping and wildly outrageous at the same time. Like its three different female leads, each film in the BRD Trilogy is unique and utterly fascinating from start to finish and represented the crowning cinematic achievement of its director, who passed away shortly after the release of Veronika Voss in 1982 at the young age of 37.

As for the performances, Hanna Schygulla casts a memorable impression as Maria, the hard driven woman determined to succeed at all costs; she would certainly be a contemporary of Joan Crawford’s Mildred Pierce if the two were placed in the same film. As Veronika, Rosel Zech creates a vivid portrait of a woman hanging on to her past while living in an uncertain present; her character was loosely based off of the tragic real life story of UFA actress Sybille Schmitz. Finally, as the eponymous Lola, Barbara Sukowa memorably channels Marlene Dietrich as the singer aiming to better her life; she definitely could be seen as the Dietrich to Armin Mueller-Stahl’s straight laced Emil Jannings. In addition to the great lead performances of these three leading ladies, each film offers up a solid supporting cast. Maria Braun‘s notable support includes Klaus Lowitsch as the man Maria remains devoted to through thick and thin, Ivan Desny as the businessman to whom Maria becomes his mistress, Gisela Uhlen as Maria’s mother, Elisabeth Trissenaar and Gottfried John as – respectively – Maria’s sister and brother-in-law, George Byrd as a kind black American soldier whom Maria meets during Hermann’s first absence, Gunther Kaufmann as an American soldier on the train where Maria meets her future employer and mistress, and the director himself as a black marketer. Notable performances in Veronika Voss include Hilmar Thate as the sportswriter who meets and becomes entranced by the mysterious Veronika, Cornelia Froboess as his girlfriend, Annemarie Duringer as the doctor who may harbor ulterior motives while caring for Veronika, Armin Mueller-Stahl as a screenwriter and Veronika’s former husband, Gunther Kaufmann as a GI who frequents the clinic Veronika is staying at, and Johanna Hofer and Rudolf Platte as the mysterious elderly married couple. Finally, Lola‘s notable performances include the aforementioned Mueller-Stahl as the new straight arrow commissioner, Mario Adorf as the crooked building contractor, Karin Baal as Lola’s mother, Matthias Fuchs as a straight laced employee who’s also fond of Lola, Ivan Desny as colleague of both Mueller-Stahl and Adorf, Rosel Zech as the wife of building contractor, and Gunther Kaufmann as an American GI (it’s not entirely clear if this GI is the same as the ones who appeared in the preceding and successive movies in the trilogy).

All three films are presented in their original 1:66:1 aspect ratio, with The Marriage of Maria Braun and Lola the recipients of brand new 4K digital restorations. Maria Braun and Lola both have very strong color palettes, with film grain organic and fine details rendered faithfully; as an additional bonus, Maria Braun also opens with the original United Artists logo at the beginning of the film. Veronika Voss has a very strong greyscale with inky blacks, organic film grain, and strongly rendered fine details. As in the case of all three films, problems like dirt, dust, scratches, or tearing are very minimal and represent the best the film trilogy will ever look on home video and a huge improvement over the previous Criterion DVD edition.

All three films are presented in a uncompressed PCM monaural soundtrack for their respective releases, preserving the original mono soundtracks on each. Dialogue on each film is both strong and clear, with Peer Raben’s music given ambiance and fidelity without being too intrusive on both the dialogue and sound effects. Instances of distortion, crackling, popping or hissing is very minimal, which makes these audio tracks the best each film in the trilogy the best they will ever sound on home video.

The Marriage of Maria Braun

Commentary from 2003 by cinematographer Michael Ballhaus & filmmaker Wim Wenders – The cinematographer and colleague of Fassbinder talk about the movies as well as a few of the ideas encased within, with a few archival comments by Fassbinder himself.

2003 interview with actress Hanna Schygulla (32 min.) – The actress talks about her collaborations with Fassbinder in addition to her personal experiences and feelings on the film.

2003 interview with film scholar Eric Renschler (19:54) – The film scholar talks about some of the influences and themes of the movie.

Life Stories: An Interview with R. W. Fassbinder (48:27) – This 1977 interview for German television reveals the filmmaker’s methods and feelings.

Commentary from 2003 with film historian Tony Rayns – The film historian talk about Fassbinder’s penultimate film, dissecting some of the themes and inspirations behind it.

2003 conversation between actress Rosel Zech & film editor Juliane Lorenz (29:29) – The actress and film editor talk about the movie as well as some of their personal thoughts about the project.

Dance with Death (55:26) – This 2000 program covers the life and death of Sybille Schmitz, the Ufa star who served as the inspiration for Veronika Voss.

I Don’t Want You to Love Me (1:36:40) – This feature length 1992 documentary covers the life and work of Rainer Werner Fassbinder with interviews with several of his colleagues.

Commentary from 2003 with film scholar Christian Braad Thomsen – The Danish film scholar and friend of Fassbinder talks a little about the movie, but also goes over some of the turbulence that the filmmaker encountered in his personal life.

2003 interview with actress Barbara Sukowa (19:45) – The actress, who portrays the eponymous Lola, talks about her collaboration with Fassbinder as well as some of her feelings about the movie.

2003 interview with screenwriter Peter Marthesheimer (33:09) – The screenwriter talks about the film trilogy, as well as his work with Fassbinder in TV and the aborted production of Rosa Luxemborg, which ended due to Fassbinder’s death.

2003 conversation between Laurence Kadish & film editor Juliane Lorenz (32:40) – The film author and curator talks with Fassbinder’s longtime editor about the themes of the trilogy.

2003 interview with cinematographer Xaver Schwarzenberger (26:55) – The cinematographer talks about his work with Fassbinder, along with creating the unique visual palette of Lola.

The BRD Trilogy is a remarkable achievement in the career of Rainer Werner Fassbinder, who made each of the films here both entertaining and personal at the same time. Criterion has bested their previous DVD set release with stunning transfers of the movies as well as carrying over all the previous special features from the set as well. Highly recommended. 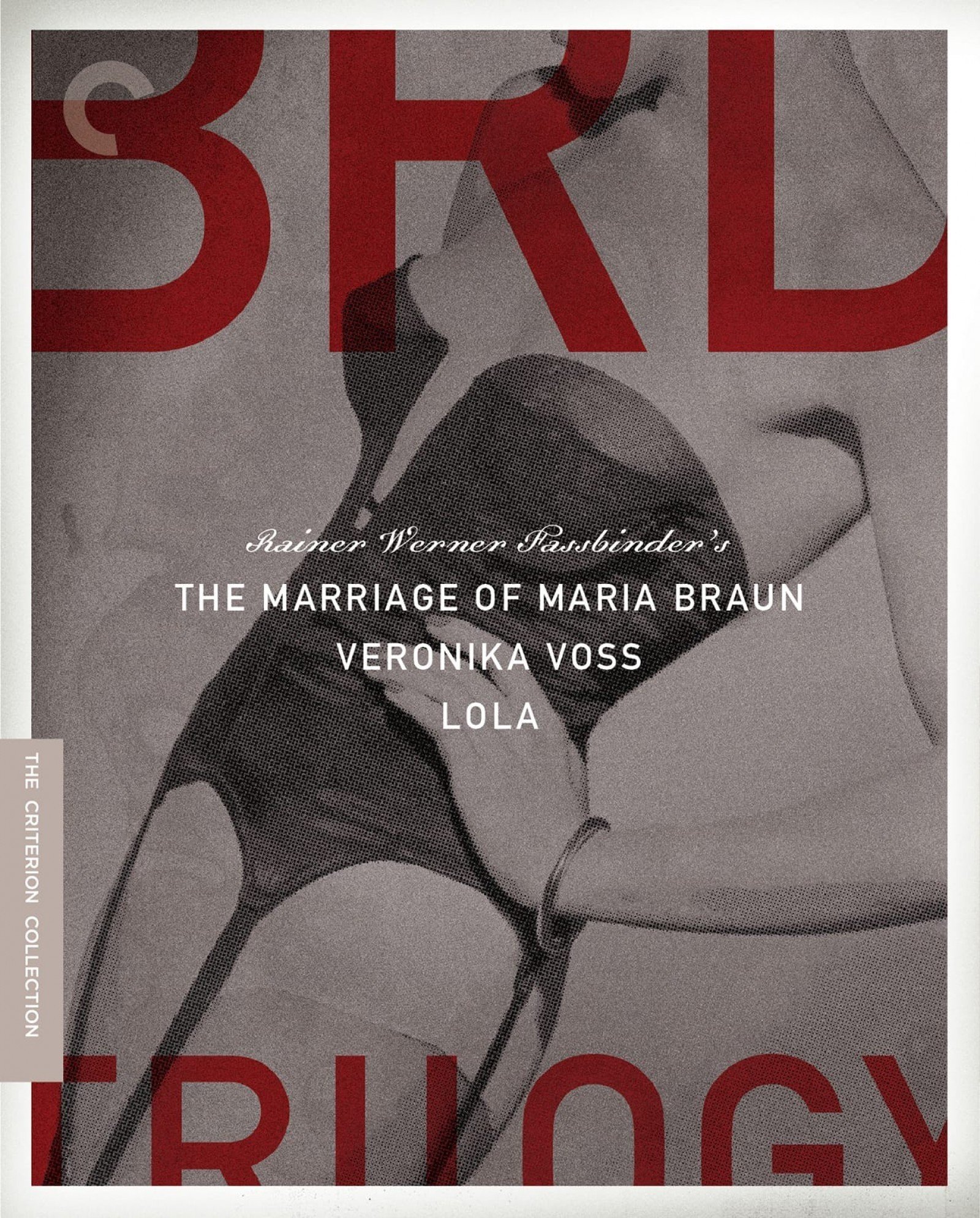