Forum List What's new Dark Style Change width
Log in Register
What's new Search
Menu
Log in
Register
Navigation
Install the app
More options
Dark Style
Close Menu
Posted on April 28, 2020 by Todd Erwin
You are using an out of date browser. It may not display this or other websites correctly.
You should upgrade or use an alternative browser.
Total slog with a few fun moments 3 Stars

Guy Ritchie returns to the R-rated crime capers that launched his career with The Gentlemen, bringing together what could be considered a dream cast, including Mathew McConaughey, Charlie Hunnam, Henry Golding, Colin Farrell and Hugh Grant.

American Michael Pearson (Matthew McConaughey) has built a large marijuana business in London, and now wants to retire, selling the business to a rival dealer, Matthew (Jeremy Strong). However, private investigator Fletcher (Hugh Grant), who apparently has questionable morals and ethics, has been collecting dirt on Pearson for tabloid journalist Big Dave (Eddie Marsen) and now wants to use that to blackmail Pearson by laying out the dirt he’s collected to Pearson’s right hand man, Ray (Charlie Hunnam) and requesting 20 million pounds in exchange for sitting on the said dirt. Fletcher tells the story as if he was pitching a screenplay to a studio executive (Grant is decked out in yellow-tinted sunglasses and leather jacket, begging for the movie to be shot on 35mm film, not a digital memory stick), with Ray interrupting him from time to time when Fletcher over exaggerates the story. The deal begins to fall apart when one of Pearson’s top secret farms is raided by a gang of young thugs who just want to shoot a choreographed fight/music video. The Chinese mob also want to muscle in, lead by Dry Eye (Henry Golding).

While I got a kick out of Hugh Grant’s performance, the movie is overstuffed with plot and characters which quite often drags down the film. Colin Farrell is also quite humorous as the gym owner and trainer of the thugs who raided the pot farm, but it’s just one more subplot to further confuse the audience. Writer-director Guy Ritchie’s script and direction is often too smug and the “jokes” often fall flat, as do many of the action sequences. Although Ritchie is returning to the type of film that started his career (films like Lock, Stock and Two Smoking Barrels and Snatch), it almost seems as if he’s run out of ideas for that genre. I really wanted to like The Gentlemen, but found it to be a slog to get through.

Ironically, although Hugh Grant’s character prefers movies shot in 35mm, The Gentlemen was captured at 3.4k resolution on Arri Alexa XT Plus cameras and completed as a 4k digital intermediate. This is a nice-looking movie (although not nearly as colorful as Ritchie’s previous movie, Aladdin). Universal’s 2160p HEVC-encoded transfer includes HDR10 high dynamic range, which does help with the darker color tones used in the film. Contrast is very good, providing deep blacks and solid shadow detail – Fletcher’s lurking in the shadows early on is much more prominent on the UHD version than on the included 1080p Blu-ray. Detail is also excellent, with well-defined fabric textures in the costumes and furniture.

The sole Dolby Atmos track is enjoyable, much more than the movie. The track (also included on the 1080p Blu-ray) has excellent clarity, fidelity, and dynamic range to provide hard-hitting gunfire, fist punches, and car crashes, as well as the hip-hop and 1960s classic rock inspired soundtrack. Overheads are used to great effect, adding even more impact to the action on screen. Dialogue is clear and mostly understandable (due to some of the thick accents) throughout.

The Gentlemen was a co-production between Miramax and STX, and the weak extras are as expected for an STX release, which have been included on both the UHD and Blu-ray discs.

Best Gentlemanly Quips (2160p; 3:09): Three minutes of what the filmmakers believe to be some of the best lines from the film.

Glossary of Cannabis (2160p; 0:46): The many different phrases used in the film for marijuana.

Behind The Scenes of “The Gentlemen” (2160p; 1:36): A typical pre-show behind the scenes trailer for the film.

Photo Gallery (2160p): Collection of stills from the movie.

Digital Copy: An insert contains a code to redeem a digital copy on Apple TV.

I really wanted to like Guy Ritchie’s The Gentlemen, and despite some good performances, the movie was just too overstuffed with plot and characters and plodded along. YMMV.

Oh well, I really enjoyed this movie and wasn't confused at all with the different characters. I'll be watching the 4K digital this week.

Just watched this on digital 4k.

It's mostly dialogue-driven, but I didn't mind that. It had a lot of nice twists and surprises and I found myself delightfully entertained.

I'll be watching this on digital 4K tomorrow.

Man, I really like this film. My second viewing this morning was even better this time because with subtitles I can now understand all of the English slang that was being said in this movie. Sure, the movie is dialogue driven, but it's good dialogue mixed in with some violence.

Robert Crawford said:
Man, I really like this film. My second viewing this morning was even better this time because with subtitles I can now understand all of the English slang that was being said in this movie. Sure, the movie is dialogue driven, but it's good dialogue mixed in with some violence.
Click to expand...

Yes, any Guy Richie film needs to be watched with subtitles.

I always have the captioning on anyway when I watch a movie.

This was absolutely a really fun movie. Thought Hugh Grant was the spotlight performance here.

I always have the captioning on anyway when I watch a movie.

This was absolutely a really fun movie. Thought Hugh Grant was the spotlight performance here.
Click to expand...

I had a smile on my face during this entire movie and even chuckle quite a bit. Watching this movie the first time at the cinema, I knew I missed some of the dialogue because of the English slang and accents which is why I enjoyed this second viewing even more so. I watch most of my movies with the subtitles activated which is why foreign movies don't bother me as I'm used to reading them.
You must log in or register to reply here. 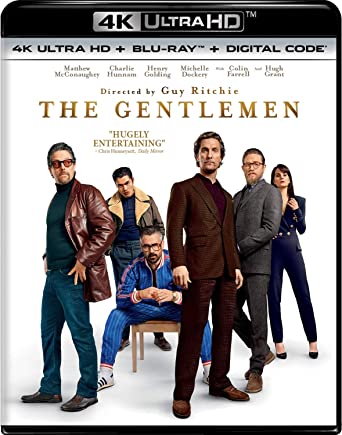