The Big Short is an interesting dissection of the financial collapse of 2008. Both a funny and sobering tale that examines the role played by financial institutions, the ratings agencies, and complex financial transactions (sub-prime mortgages, mortgage-backed security swaps (MBS), collateralized debt obligations (CDO), credit default swaps, and synthetic CDOs) in bringing the economy to its knees. It’s as consumable a view into the contributing factors of the collapse as one is likely to find, with a powerful cast, a winning script, and solid production.

“We live in an era of fraud in America. Not just in banking, but in government, education, religion, food, even baseball… What bothers me isn’t that fraud is not nice. Or that fraud is mean. For fifteen thousand years, fraud and short sighted thinking have never, ever worked. Not once. Eventually you get caught, things go south. When the hell did we forget all that? I thought we were better than this, I really did.”

Prior to the financial meltdown in 2008, the awkward, financial whiz Dr. Michael Burry saw the swelling risk in the housing market from sub-prime home loans– a risk that all the major financial institutions ignored (or willfully embraced). His findings, which ran contrary to the history of stability in the housing market, placed him in a unique position to request credit default swaps, a fancy way of saying a bet against the housing market that, if he’s proven right, would make him very wealthy as a pillar of the financial system collapses. There is a risk, however. If he’s wrong, he must pay premiums for as long as his prediction does not come to be. Burry’s unusual position – and willingness to stake considerable cash from the hedge fund he oversees – is met with glee from the financial institutions he approaches to place these credit default swaps. And through fortuitous circumstances, a handful of other industry players catch wind of his research and predictions. Skeptical but intrigued, these few others follow in his path though there reasons for doing so are not quite the same.

As we all now know, Michael Burry’s findings that the housing market existed in a dangerous bubble – swollen with shaky mortgages with decreasing returns, packed and bundled and given credit ratings absurdly higher than their actual worth – were correct and would be the thick thread that pulled the rug from under the economy. Through the film, based on the book The Big Short: Inside the Doomsday Machine by Michael Lewis (author of Moneyball: The Art of Winning an Unfair Game), a culture of avarice, ignorance, and distorted and corrupt checks and balances in government and the private sector bear the weight of responsibility.

Performances are top-class with a dream cast excelling in their roles. Christian Bale possesses the awkward and eccentric soul of Michael Burry with humor and conviction. Brad Pitt’s Ben Rickert recluse with considerable financial skill helping two young upstart, garage-born hedge fund managers Jamie Shipley (played by Finn Wittrock) and Charlie Geller (played by John Magaro), is suitably confident and convincingly reluctant. Ryan Gosling has the most fun as Jared Vennett, a cocky salesman from Deutsche Bank betting against the other side of his own bank’s interests. Gosling narrates the film, talks to the camera (a convention that works very well in this story), and owns every one of his scenes. He is terrific. And finally, Steve Carell is perhaps the most unusual choice for the role of the hot-headed, foul-mouthed Mark Baum – a man inside the system he hates. Carell inhabits the role with aplomb. Support players, Rafe Spall, Hamish Linklater, and Jeremy Strong, each bring a fine mix of drama and humor.

It is important to realize that though we follow a handful characters in parallel stories, they are not heroes in the story. They made money by betting against the system and reaped enormous financial reward as millions lost homes and jobs and uncertainly ripped throughout the world’s economy. That isn’t lost in the screenplay. We’re given that perspective as the characters pause and eventually come to moments of fear and introspection. But if the system had worked as it should – with the right level of oversight, the red flags being raised by the institutions and governmental bodies – we might have avoided the mess. And frankly, who would have listened to these men if they had chosen to sound the alarm rather than position themselves to win as the economy lost. Burry told these institutions his findings on an impending collapse. He was a gifted individual and had run the numbers. But everyone he approached took the bet. They could have (and should have) done due diligence and researched his findings – then said no to his credit default swap deal. But they didn’t.

Director Adam McKay, a surprising choice to helm, takes interesting and exciting chances. The subject matter is, at its root, complicated and boring (to most), but the details are important to understand as they are the necessary context required to follow the breadcrumbs and understand the theory of how we ended up in the financial crisis of 2008. The occasionally employed stylized choice simulating an off-the-wall documentary approach is often achieved by poor framing, jump cuts, or characters obscuring the frame at odd times. It feeds the documentary feel, distracting at times, but perhaps necessary. McKay works from a brilliant screenplay he co-wrote with Charles Randolph – and was the worthy recipient of the Academy Award for Best Adapted Screenplay. The script includes hilarious one-liners among the drama. And the breaking of the fourth wall, through Gosling’s narration and by celebrities like Anthony Bourdain and Selina Gomez helping explain key financial concepts, is a winning method to mix into the traditional narrative and bring us, the layman, along.

Personally, I’ve read a great deal about the causes of the crash. Being just a few years ago, it’s hard not to recall the daily news reports of banks and institutions going bust, the painful reality of millions losing jobs, homes, and in the depths of the crisis, hope. The political wrangling, positing, blaming that began right away, the boat rocking it produced in the presidential election, and the prevailing uncertainty into how far it would spread and how deeply it would unravel the American and global economy, was a dark and unpleasant time.  The Big Short reminds us of that time and begs the question – what have we learned.

Presented with a 2.40:1 aspect ratio, Paramount’s Blu-ray release of The Big Short boasts exceptional detail and rich, vibrant colors, and natural grain, combining to deliver a very strong video presentation for home theaters. Shot on film (versus digital), skin tones are natural – at times on the warmer side, while many of the higher tech offices sport cooler tones – lots of blue-grey contrasting with the dark grey/black of computer equipment and in higher-end offices, warm and rich wood tones. Nothing can be faulted here.

The Big Short arrives with an English DTS:X audio option (an alternative to Dolby Atmos) allowing for more simultaneous “objects” in the sound space (versus sound mixed to discrete channels). For those without the additional speakers for which DTS:X is optimized, the audio will default to a more common 7.1 mode for those so equipped (which is how this played on my system).

This is a fine audio presentation focused strongly on dialogue with good use of music and some sound effects here and there to express itself more openly. Precision in the audio space is tight and has a number of scenes that take full advantage for the 7.1 set up to pull you in to a scene. Dialogue is exceptionally clear, balance is good (quieter moments aren’t immediately followed by explosive sound – important when watching this as kids are sleeping.) 🙂

In the Tranches: Casting (15:51): Likeable look at the eagerness of the cast, with the cast discussing their roles and the director and producers lavishing (earned) praise. An interesting but short piece.

The Big Leap: Adam McKay (11:31): A warm look at the apparent unusual choice of Adam McKay as director and his path to be in the director’s chair.

Unlikely Heroes: The Characters of The Big Short (11:28): Perspectives on the characters at the heart of the film who, with their ability to understand the language and a necessary amount of doubt and skepticism, who found themselves in a positions that no-one else could or wanted to be in.

The House of Cards: The Rise of the Fall (14:01): A view at the core issue – the complexity of language and knowledge intended to obscure this world and why most people don’t understand or can’t hold attention on the details. This special feature digs into the various terms (MBS, CDS, etc.). This is the most compelling of the special features.

Getting Real: Recreating an Era (11:13): A good look at the shooting choices, creating urgency and energy in locations and scenes that don’t always lend themselves to having that.

Deleted Scenes (6:28): 5 deleted and extended scenes with more from the visit to Florida and Michael Burry’s personal life.

The Big Short achieves an indictment on apathy – with the age-old complaint that people are too easily content to no question things as long as they are going okay (for them) – and now, years after the crash, it’s hard to see what lessons have been learned. The crash has become little more than a divisive political issue, one which both sides of America’s two-party system have largely washed of nuance in favor of quick applause lines and headline catchphrases. This film attempts to rattle us from than state by shining a damning light on the corrupt and incompetent players.

It succeeds at explaining the various factors that led to the crash though not as completely or comprehensively as possible (but then again, for that level of in-depth autopsy, the documentary medium is better suited).  I would like to have seen more of the decision making and rationale (or lack thereof) from inside the major financial industry powerhouses. I would like to have seen the effect the crash had on smaller financial institutions who actively avoided the questionably practices of sub-prime mortgages, etc., (institutions who collapsed either because of the crash or from the pendulum of regulatory oversight swinging from “not enough” to where we are today. I think that is where The Big Short comes up short for me – too few strokes when painting a picture of how we arrived at the crisis.

Still, The Big Short gets a good deal right, terrifyingly so, and does so with humor in unexpected places that makes for a fascinating experience. Recommended. 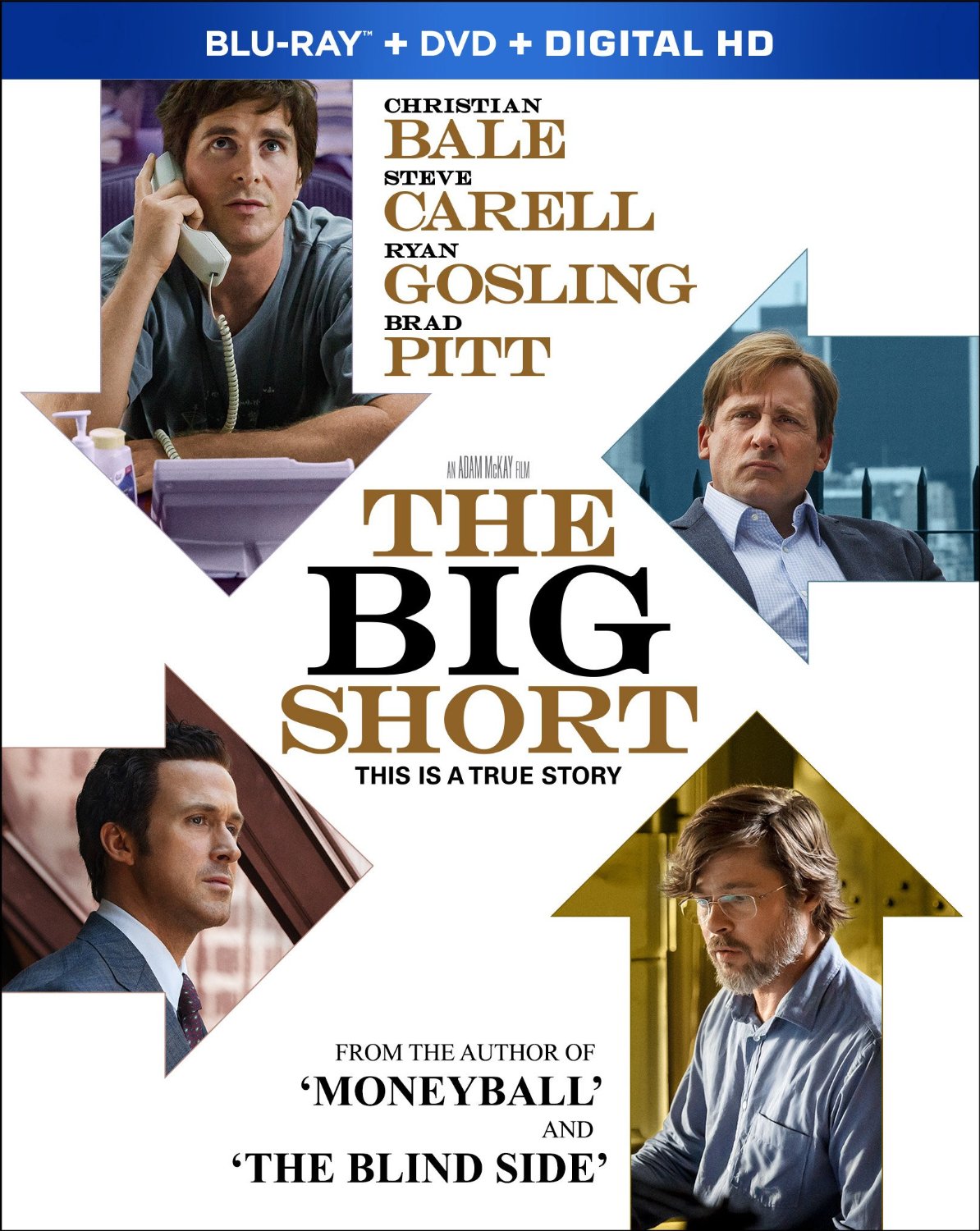