Forum List What's new Dark Style Change width
Log in Register
What's new Search
Menu
Log in
Register
Navigation
Install the app
More options
Dark Style
Close Menu
Posted on March 21, 2016 by Matt Hough
You are using an out of date browser. It may not display this or other websites correctly.
You should upgrade or use an alternative browser.
Entertaining western done in by a poor transfer 2.5 Stars

During his long career in show business, Van Johnson appeared in many romantic comedies, drawing room dramas, war movies, and musicals, but he rarely appeared in westerns. Rudolph Maté’s The Siege at Red River is one of his rare forays into that genre, and he handles the demands of the genre (riding, shooting, fighting) rather well.

During his long career in show business, Van Johnson appeared in many romantic comedies, period and present day dramas, war movies, and musicals, but he rarely appeared in westerns. Rudolph Maté’s The Siege at Red River is one of his rare forays into that genre, and he handles the demands of the genre (riding, shooting, fighting) rather well. What’s more, the screenwriters incorporated into their western some comedy, some romance, and even a couple of songs which allowed the star to better blend into the milieu, all in support of an interesting story about goings-on during the last weeks of the Civil War.

Operating undercover as New England peddlers out west, Confederate soldiers Jim Farraday (Van Johnson) and his medicine show partner Benjy (Milburn Stone) have stolen one of four Gatling guns in existence and are taking it behind enemy lines in the hopes of getting it back to their troops to turn the tide of battle in their favor. In order to keep it hidden from Pinkerton agent Frank Kelso (Jeff Morrow) and Union Army commander Lieutenant Braden (Craig Hill) who are on the lookout for the stolen gun, Farraday makes the acquaintance of pretty nurse Nora Curtis (Joanne Dru) who runs a kind of combination clinic and orphanage and hides it in her parlor window seat. But the only one who can help the two Confederates get the gun to their contacts out west is something of a scoundrel, Brett Manning (Richard Boone), a hard drinking gambler who isn’t to be trusted.

The screenplay by Sid Boehm and Leo Townsend might not be chock full of invention, but there are enough pleasant instances of comedy and romance amid the derring-do to make the hour and a half pass by agreeably, and director Rudolph Maté has made sure that his camera catches many stunning outdoor vistas that give flavor and texture to this late Civil War tale. In fact, in the climactic attack on Fort Smith where several Indian tribes lay siege to a helpless fort from the front while the Gatling gun does its thing covering the fort’s rear gate, Maté films much of the action from a high angle looking downward on some truly stunning staging of action (in widescreen and Technicolor, it must have thrilled audiences in its day). Elsewhere, Johnson and Stone warble the song “Tapioca” several times (a code tune to alert operatives along the way who they are) while each gets his own spotlight moments to show his stuff: Johnson in a street brawl with a bullying soldier (though it’s fairly clear both actors are using stunt doubles for most of the roughhouse stuff) and Stone in a delightful sequence where he feigns stomach distress in order to get Nurse Curtis drunk on his “tonic” so he can retrieve the gun from its hiding place.

Van Johnson has no trouble driving wagons or riding the range on his horse fitting as comfortably into the western genre as he would in a melodrama or musical. The romance with Joanne Dru is rather soft-pedaled for much of the movie and even their final kiss is badly staged by director Maté behind a horse, but their chemistry together works well and could have been exploited further had the scriptwriters desired it. Milburn Stone is most agreeable as Benjy (and he’d be seguing into a long running, Emmy-winning association with another western in just a couple of years) while Richard Boone steals all of his scenes as the rowdy, dishonest Brett Manning. Square-jawed, forthright Lieutenant Braden fares well in the capable person of Craig Hill while Jeff Morrow does his usual professional job as dedicated Pinkerton agent Frank Kelso. Rico Alaniz is somewhat uneasy as Chief Yellow Hawk, but Robert Burton as the town sheriff is grounded and real.

This was one of Fox’s Panoramic Productions, widescreen features not filmed in Cinemascope after its advent, but the Fox Cinema Archive disc chooses to present the feature in an open matte transfer. It zooms just fine to more widescreen proportions eliminating all that bothersome head room, but anamorphic encoding would have helped with the quality of the image had Fox done a proper widescreen scan of their materials. The disc is also burdened with very erratic sharpness and color quality with focus sometimes inexplicably soft and color veering from luscious to chalky and unappetizing. Black levels aren’t especially good, dragged down by a very peculiar kind of pulsating contrast which is especially noticeable in darker lit scenes. There are some specks and a bit of damage here and there and a problematic colored strip that comes and goes down the right side of the frame. The purplish reel change markers are also present and accounted for. The movie has been divided into chapters every ten minutes so this disc contains 9 chapters.

The Dolby Digital 2.0 sound mix is decoded by Dolby Prologic into the center channel. Volume levels are set way too high and require quick adjustment to prevent damage to the equipment and distortion in the soundtrack. Dialogue, Lionel Newman’s background score, and the numerous sound effects have been blended professionally to form the film’s soundtrack, but it’s undermined by some low level hiss and some pops and crackle on occasion.

There are no bonus feature on this made-on-demand disc.

The Siege at Red River (“The” in the title is in all the advertising and covers for the disc though the film’s title on screen omits the article) is a bit above the average western with entertaining stars and a fine production. It’s not served well by this made-on-demand encode, however, showing that the movie needs serious attention to better bring out its beautiful photography and amusing performances.

I gave the Fox archive and mastering people documentation several years ago on the fact that Leonard Goldstein's Panoramic Productions were composed for 1.66:1.

Too bad they didn't pay attention. 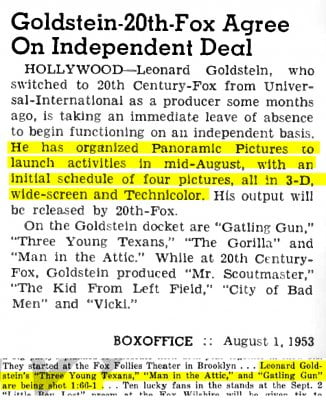 Yeah, no purchase for me.

I've never seen this film and would have been interested in buying this disc if it had been any good. So Fox: you've lost another sale through your incompetence and lack of diligence.
E

Too bad, this would have been a buy for me. I still don't understand the sound level , on so many releases ? No Q.C. They make Fox look very unprofessional !

I was thinking about this issue the other day. Van Johnson could take on a western because he knew how to ride a horse. The modern generation of actors have probably never ridden a horse and would have a long learning curve to appear properly in a western film.

I was thinking about this issue the other day. Van Johnson could take on a western because he knew how to ride a horse. The modern generation of actors have probably never ridden a horse and would have a long learning curve to appear properly in a western film.
You must log in or register to reply here.