Warner Bros’ 25-disc mega box set, The Big Bang Theory: The Complete Series, includes all 279 episodes of the Emmy-winning sitcom on Blu-ray, plus an exclusive bonus DVD of additional features.

It is hard to believe that if it hadn’t been for CBS ordering a second pilot, The Big Bang Theory would have never existed. That first pilot (which, sadly, is not included in this set, not even clips) was a disaster, as indicated by creator Chuck Lorre (Two and a Half Men, Mom, The Kominsky Method) in many of the special features and on the liner notes of the included booklet. The original female lead of Katie, played by Amanda Walsh, was unlikeable and was not a motherly figure to the child-like geniuses, almost the exact opposite of Penny (Kaley Cuoco) who would appear in the retooled second pilot. It was the chemistry among the five actor ensemble that would convince CBS to pick up that second pilot with a 13-episode order for the 2007-2008 TV season that would later be expanded to 22, but due to a Writer’s Guild strike in late 2007, that order was reduced to only 17. The original cast consisted of Experimental Physicist Leonard Hofstadter (Johnny Galecki) and his room mate Theoretical Physicist Sheldon Cooper (Jim Parsons), Waitress/Actress Penny (Kaley Cuoco) as the girl across the hall, Aerospace Engineer Howard Wolowitz (Simon Helberg) and his best friend Particle Astrophysicist Rajesh Koothrappali (Kunal Nayyar) who at first is unable to speak to women unless he is inebriated.

Over the twelve seasons, the characters would mature, Leonard and Penny would have an on and off dating relationship eventually leading to marriage, Howard would be given the opportunity to install his invention on the International Space Station and marry Microbiologist and pharmaceutical chemist Bernadette (Melissa Rauch), Sheldon would meet and after eight years eventually marry Neuroscientist Amy Farrah Fowler (Mayim Bialik) on a dating site after the gang creates a profile for Sheldon, and Rajesh would give up the monetary support from his parents and eventually gain enough self-confidence to give public lectures at the Griffith Observatory. The writers would also end the series on a high note with a fan-pleasing finale that brought closure to the series but not the characters, not making the mistake that some shows did, like Friends, with everyone disbanding and saying goodbye. Credit should also be given to Executive Producer Chuck Lorre for ending the series after twelve seasons when Jim Parsons decided that he wanted to leave at the end of the season, and not try to bring in a new character (and possibly change the dynamic) in the 13th season, something he may have learned from trying to replace Charlie Sheen on Two and a Half Men.

The Big Bang Theory was broadcast on CBS in 1080i. Warner is presenting all 279 episodes in 1080p, using the AVC codec on all seasons except season 3 which uses VC-1. There is some noticeable film grain in the pilot episode, likely because it was shot on film. All other episodes were shot digitally, in HDCAM for seasons 1 thru 6, switching to F55 RAW starting with season 7. There is a noticeable shift in quality from the pilot to the second episode, with a more sterile and grain-free image from the second episode on. There is another shift in quality with Season 7, which exhibits bolder and more vivid colors and a higher level of detail (take a look at episode one from season 7 at the start of chapter 2, where the textures in the panel below the keypad on the vending machine behind Raj is well-defined). These are very definite upgrades from the original network 1080i broadcasts (and especially the syndicated 1080i/720p broadcasts), free of any compression artifacts – very obvious during the fast-cutting opening title sequence which was always a mess.

The Big Bang Theory was broadcast on most CBS stations in Dolby Digital 5.1 audio, and Warner has included lossless DTS-HD MA 5.1 tracks on all episodes with the exception of season three, which includes lossy Dolby Digital 5.1 tracks encoded at 640 kbps. The series was recorded in front of a live audience, and as most sitcoms of this nature, is very dialogue driven. Surrounds are used mostly for the whooshing atoms during the interstitials and audience reactions. Dialogue is spread across the front soundstage along with occasional sound effects. LFE is used sparingly.

As stated previously, the first 24 discs are identical in content to those included in the individual season sets. A bonus disc, on DVD for some reason, contains some content exclusive to this release. Everything is packaged in Warner’s standard Complete Season hardbound book with the discs in sleeves, with that book sliding into a hard outer cover. 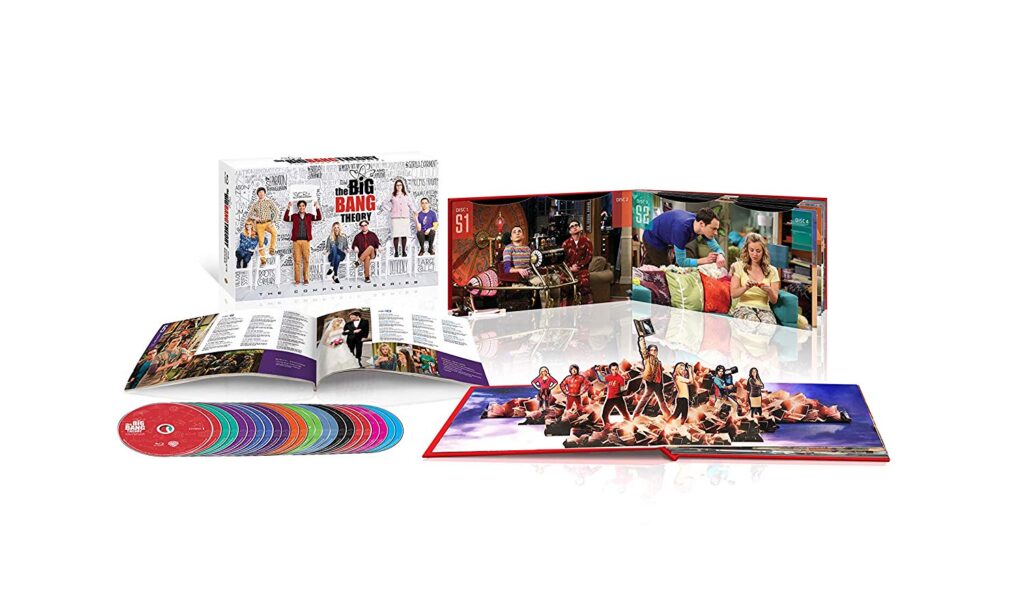 Season One, Disc Two
Quantum Mechanics of “The Big Bang Theory” (480i; 17:16): Executive Producers Chuck Lorre and Bill Prady discuss the creation of the series and casting, interspersed with interviews from the cast.

Season Two, Disc Two
The Big Bang Theory: Physicist to the Stars (480i; 10:12): A look at the show’s Science Consultant, David Saltzberg, Ph.D.

Testing the Infinite Hilarity Hypothesis in Relation to “The Big Bang Theory” (480i; 15:33): A look at some of the more character-driven humor from Season Two.

Set Tour with Simon and Kunal (1080p; 7:40): The actors who play Howard and Raj walk us through the sets on stage.

Season Four, Disc One
The Big Bang’s Theory of Relativity: Actor on Actor – Simon, Melissa and Kunal (1080p; 8:15): The three actors recall their favorite moments from the third season.

The Big Bang’s Theory of Relativity: Actor on Actor – Jim and Mayim (1080p; 8:24): The two actors recall their favorite moments from the third season.

The Big Bang’s Theory of Relativity: Actor on Actor – Kaley and Johnny (1080p; 6:29): The two actors recall their favorite moments from the third season.

Barenaked Ladies on “The Big Bang Theory” (1080p; 3:23): The band that performs the show’s theme song visits the set to make a music video of the song.

Season Five, Disc Two
Professors of Production (1080p; 15:01): A look at the various departments that help create the show each week.

The Big Bang Theory’s Laws of Reflection (1080p; 11:37): The cast reflects on their favorite moments from the fifth season.

Houston, We Have a Sit-Com (1080p; 9:25): The cast surprises astronaut Joe Acaba with a live Skype call from the set to the International Space Station.

Johnny Galecki Crashes the BBT Writers Panel (1080p; 3:29): The actor sneaks in to the panel in full cosplay.

Season Seven, Disc Two
James Earl Jones: The Un-Conventional Guest Star (1080p; 5:39): A look at his guest appearance as himself on the show.

The Big Cendrowski: Backstage with he Coolest Director and Cast in the Universe (1080p; 16:06): Director Mike Cendrowski takes us behind the scenes of how an episode makes it to the TV screen each week.

2014 Big Bang Theory Comic-Con Panel (1080p; 28:20): After a special performance of If I Didn’t Have You by Garfunkel and Oates, the writers discuss the then-upcoming eighth season.

Here’s to You, Carol Ann Susi (1080p; 9:47): The cast and crew reflect on the passing of actress Carol Ann Susi, who was the voice of Howard’s mother.

Season Nine, Disc One
#JustAskBBT: Who Will Get the Couch (1080p; 4:59): The cast answers questions from fans that were submitted on Twitter.

#JustAskBBT:If I Had to Go to Mars (1080p; 7:16): The cast answers more questions from fans that were submitted on Twitter.

The Big Bang Theory Gives Back (1080p; 5:08): Chuck Lorre, along with the cast and crew, salute the first recipients of the scholarship fund they set up at UCLA.

#JustAskBBT (1080p; 5:17): The cast answers questions from fans that were submitted on Twitter.

Season Ten, Disc Two
The Ever-Expanding Universe of The Big Bang Theory (1080p; 11:22): Executive Producers Chuck Lorre and Steve Molaro, along with the cast, discuss the expanding family of characters in the tenth season.

Mad Props (1080p; 7:59): Prop Master Scott London takes the viewers on a tour of many of the props featured in the first ten seasons.

Who’s the Baby Now? (1080p; 7:33): Executive Producers Chuck Lorre and Steve Molaro, along with the cast, discuss the addition of baby Halley Wolowitz.

Season Eleven, Disc Two
The Maturation Imperative (1080p; 11:05): Executive Producers Chuck Lorre, Steve Molaro and Steve Holland, along with the cast, reflect on the top moments from season eleven, culminating in the season finale of Sheldon and Amy’s wedding.

The Big Bang Theory: The Blueprint of Comedy (1080p; 5:43): The cast and crew look at the creation of one scene, from written page to broadcast.

The Big Bang Theory Cast Visits Ellen (1080p; 12:29): The cast visits The Ellen DeGeneres Show to discuss the series finale and the overall impact the show has had.

Season Twelve, Disc Two
The Sweet Spot (1080p; 12:42): A look at stand-up comic Mark Sweet, who has been warming up the studio audience for the series for its entire twelve season run.

Unraveling the Mystery: A Big Bang Farewell Special (1080p; 21:17): Johnny Galecki and Kaley Cuoco take viewers on a tour of the sets, the wardrobe, and props before the final tear-down of the sets.

Digital Copy: An insert contains a code to redeem a digital copy of all 12 seasons on Vudu.

The Big Bang Theory: The Complete Series is a comprehensive collection of all 279 episodes plus over 12 hours of bonus material. Fans will likely love the collectible packaging, but some may find it difficult to fit on a standard shelf along with their Blu-ray collection. 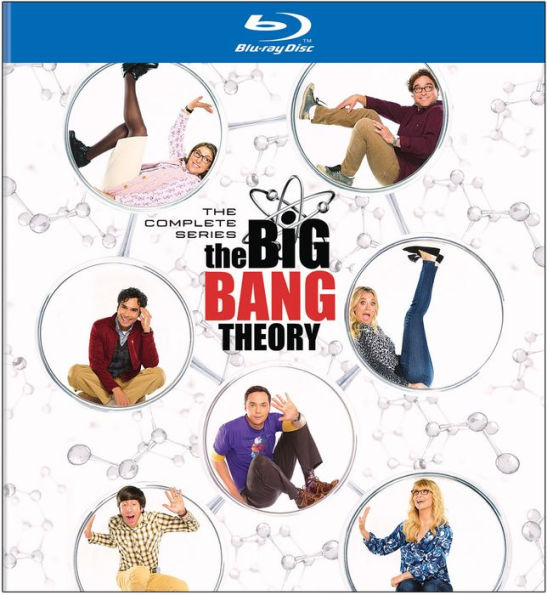