Paramount’s 4K UHD Blu-ray release of the classic It’s a Wonderful Life was long overdue, and despite a much improved transfer (from a new 4K scan), it is a rather frustrating release.

Note: The following was taken from my review of the 2011 Blu-ray release:

As joyous as people like to think Frank Capra’s It’s a Wonderful Life is, this is actually a fairly dark film. People forget that, at its basic storyline, this is a film about George Bailey (James Stewart), who gives tirelessly of himself until he reaches a point where things look their bleakest, and contemplates suicide on a bridge during a snow storm on Christmas Eve. Rescued at the last minute by guardian angel Clarence (Henry Travers), George wishes he wasn’t born. To teach him a lesson, Clarence grants George his wish and proceeds to show him what the lives of his loved ones would have been like if George had never existed.

The first time I experienced It’s a Wonderful Life was in the late 1970s or early 1980s, when it would play annually in November as part of Cinekyd’s Saturday Movie Nights. Every Saturday night, Cinekyd would show a classic film and an occasional recent box-office hit in glorious 16mm. Some of the films were rented from companies that licensed these films for non-theatrical use, but many were on loan from collectors, and It’s a Wonderful Life was one of those films, having been almost forgotten and allowed to fall into public domain. In fact, if it were not for both the emergence of home video (just about every third-tier video label had released the film in some form on VHS, including Blockbuster) and the constant (and free) airplay by television stations in the 1980s, this film would very likely still be a forgotten classic, at least by the general public. Many of the VHS incarnations were almost unwatchable, taken from heavily damaged 16mm prints, although Criterion’s laserdisc was, at its time, the cream of the crop, having been struck from a 35mm collector’s print. It was not until 1993, when Republic Pictures managed to enforce a claim to the copyright, by proving in court that it still owned the original film elements and rights to the original story (written by Phillip Van Doren Stern). This allowed Republic Pictures (and later Artisan/Lionsgate and now Paramount) to release one and only one version of the film on VHS, DVD, Blu-ray, and now 4K UHD Blu-ray. Interestingly, in 2012, the film was given a PG rating by the MPAA for “thematic elements, smoking and some violence.”

The film’s core plot device has been popular, having been used in numerous sitcoms and one-hour dramas. The film was also remade in 1977 as It Happened One Christmas and starred Marlo Thomas in a modern update to the story. More recently, DreamWorks Animation’s Shrek Forever After implored the same device with Rumplestiltskin stealing the day Shrek was born when Shrek wishes to relive one day from his childhood.

Last year, Paramount released It’s a Wonderful Life to digital platforms like Vudu and iTunes in UHD after completing a new 4K restoration taken from the original camera negatives and two fine grain nitrate prints. Nearly a year later, Paramount has issued that same transfer on physical media (finally), and the results are astonishing, especially after the botched 2009 (and 2011) heavily DNR’d Blu-ray release. This 2160p transfer includes both HDR10 and Dolby Vision high dynamic range (I viewed this on HDR10-capable equipment). The increase in resolution along with the use of HDR allow for greater detail (the award-winning snow-fall effects look much more natural now than ever before) and a broader grayscale, improving contrast. Film grain is also left intact (unlike the previous releases), allowing for a more film-like presentation. It’s a Wonderful Life has never looked better.

Paramount’s previous Blu-ray release included a lossy Dolby Digital 2.0 mono track encoded at 224 kbps. This newly restored version contains a Dolby TrueHD 2.0 mono track that is a noticeable improvement. The track sounds much cleaner, with virtually no pops or noticeable hiss or other anomalies, and an increased dynamic range. As Ben Burtt notes in one of the supplements, the film was nominated for an Academy Award for Best Sound, and after watching that segment and paying even more attention to the subtle details of the mix, this is a very dense track with subtle nuances throughout.

This is where the release gets rather frustrating. For some strange reason, Paramount has decided to ditch all archival features, such as The Making of “It’s a Wonderful Life” 1990 TV special hosted by Tom Bosley and the film’s original theatrical trailer that were included on the previous Blu-ray release. And instead of including the new Blu-ray release (which uses the same source master as this release), the only Blu-ray disc included in this set is the 2009 feature-only colorized version. Truly boggles the mind…..

There are three new special features included, but only on the UHD version.

Restoring a Beloved Classic (2160p; 13:03): This is an interesting (but not fully detailed) look at the 4K restoration process the film went through, hosted by Andrea Kalas, SVP of Archives at Paramount and Laura Thornburg, Executive Director of Film Preservation.

Secrets from the Vault: “It’s a Wonderful Life” (1080p; 22:11): Film Historian Craig Barron and Sound Designer & Historian Ban Burtt dispense trivia about the making of the film, its legacy, and Burtt discusses some of the excellent sound design used in the film.

It’s a Wonderful Life (Colorized): the movie-only colorized version from the 2009 and 2011 Blu-ray releases.

Digital Copy: An insert contains a code to redeem a digital copy (in UHD where available) on your choice of Vudu, iTunes (now Apple TV), or FandangoNow.

Paramount’s 4K restoration of It’s a Wonderful Life finally arrives on 4K UHD Blu-ray, and the result is excellent and a worthy upgrade from the previous Blu-ray releases. However, the release overall is rather frustrating, as this should have included the restored version on Blu-ray rather than an older colorized version (or even a 3-disc release). 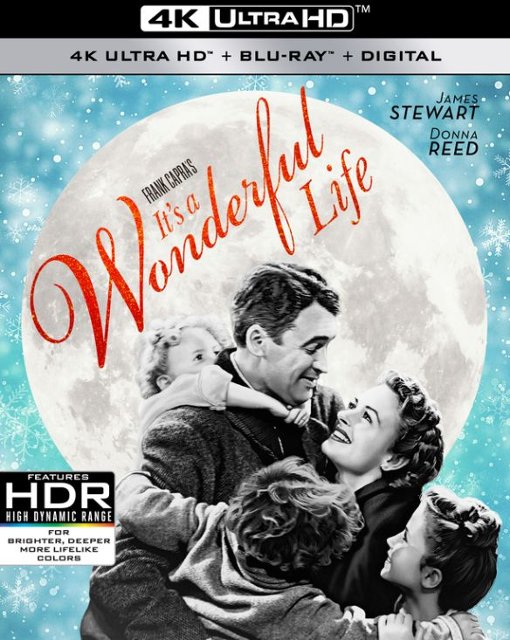