Paul Verhoeven gets down and dirty in this raw slice-of-life drama. 4 Stars

Paul Verhoeven’s fifth Dutch film Spetters extended the international reputation he had earned with Soldier of Orange. It’s a long, stark, slice-of-life drama more depressing than exhilarating though certainly there are enough upbeat moments to keep the drama from being a complete downer.

Paul Verhoeven’s fifth Dutch film Spetters extended the international reputation he had earned with Soldier of Orange. It’s a long, stark, slice-of-life drama more depressing than exhilarating though certainly there are enough upbeat moments to keep the drama from being a complete downer. But you won’t confuse Spetters with any film made in America in 1980. Its graphic depictions of many flavors of sex, its unashamed focus on male and female nudity (particularly the former), and its unfettered views of human interactions and ever-evolving relationships put it in a class all its own.

Two young motocross racers Rien (Hans van Tongeren) and Hans (Maarten Spanjer) and their mechanic Eef (Toon Agterberg) dream of fame, fortune and hot women. Their idol is legendary motocross champion Gerrit Witkamp (Rutger Hauer) who cannily fuels their competitive drive and offers occasional encouragement to the worshipful trio. The three fast friends’ lives are changed when they meet a young seductress named Fientje (Renée Soutendijk), a fry cook in a traveling food wagon who longs to be free of grease and sweat. Eventually through interacting with each of the three men, each of whom she hopes might offer a ticket out of her dead-end life, she makes them face the realities of success, defeat, and their individual sexual and personal natures.

Gerard Soeteman’s screenplay manages to give an equal amount of time to each of the three protagonists, both on their own and in their interactions with Fientje, and what we see ranges from exciting motocross races and training sessions (with one training sequence designed especially well for slapstick comedy), each of the three young men’s encounters with the opposite sex and the emerging interest in one of them in same sex coupling, a faith healing revival meeting, parental love and parental abuse, gay bashing and gang rape, and especially a horrific accident (delivered with bone-crunching realism by the director) that sets one of the guys onto a completely unexpected path (though actually each of the three young men go off in unexpected directions by the end of the movie). Director Paul Verhoeven never flinches from showing us the triumphs and tragedies of these lower middle class youths with no thought of hiding nudity (the boys engage in penis measuring in one unforgettable moment in order to decide who gets to try for Fientje) or disguising sexual intercourse in discreet ways (the sexual trysts are usually quite quick when they occur at all apart from the violent gang rape that happens about three quarters of the way through the film). But we see small town life in all its flavors: enthusiastic villagers who enjoy sports or a local band concert are just as important to the mise-en-scene as the young men’s preoccupations with all matters sexual or a local biker gang that causes trouble on a couple of occasions, a climactic one coming at the worst possible time.

While Renee Soutendijk may not garner top billing, she unquestionably steals the movie with her come-hither looks and sexual allure, her desperation to escape from her unwanted life, and her willingness to jump from man to man in order to achieve her goals. Top-billed Hans Van Tongeren as Rien has the most dramatic of the three leading men’s roles and he goes through the “thrill of victory, agony of defeat” syndrome that often attaches itself to potential world-class athletes. Toon Agterberg has quite a few memorable moments as the conflicted Eef, wrangling brutally with his abusive father, engaging in petty thefts of gay men he feels are easy marks until they turn the tables on him, and finally beginning to show signs of “manning up” as the film reaches its conclusion. Maarten Spanjer as the green-behind-the-ears Hans provides comic relief for much of the movie but unexpectedly comes into his own as the film concludes. Marianne Boyer offers moving assistance as Rien’s loyal girl friend. The two biggest names to emerge from Verhoeven’s Dutch period are Jeroen Krabbe and Rutger Hauer. Krabbe plays the animated television sports reporter who constantly sings the praises of the charismatic soon-to-be motocross champion Witkamp played by Hauer. Hauer lives up to his vaunted magnetism in a series of scenes where a worshipful public practically genuflects at his feet.

The film has been framed at 1.66:1 and is presented in 1080p resolution using the AVC codec. Apart from a couple of dated-looking early scenes that feature chalky, unappealing color, most of the image quality is excellent with fine sharpness and rich colors that feature realistic skin tones. Black levels can also be quite impressive in some darker scenes. Only an infrequent dust speck here and there mars the other fairly pristine picture. Subtitles are in white and are easy to read. The movie has been divided into 8 chapters.

The DTS-HD Master Audio 2.0 mono sound mix is clear and strong. The Dutch dialogue has been mixed securely with the sound effects and Ton Scherpenzeelkayak’s music (which also works in pop tunes from ABBA, Michael Jackson, and others). No age-related hiss, crackle, flutter, or hum is noticeable.

Not a film for every taste but for those game enough for something raw and unusual, Paul Verhoeven’s Spetters won’t be soon forgotten. Kino’s Blu-ray offers excellent picture and sound quality with a few meaningful bonus features. Recommended!

That's a fine review, Matt! I've ordered this and am hoping that Paul Verhoeven's other Dutch films will get a similar treatment.
Reactions: Matt Hough 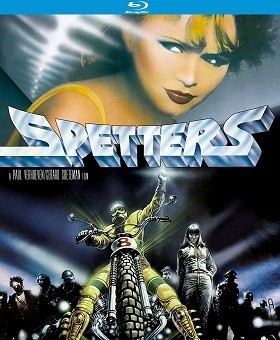