Ten years after the events of Pacific Rim, it is believed that the threat from the kaiju sent by the Precursors is over, but as a security measure the Jaeger Program has been re-instated. Jake (John Boyega), the son of Marshall Stacker Pentecost that sacrificed himself to help defeat the kaiju, is living in the Los Angeles area trading used (and often stolen) jaegar parts to earn a living after being expelled from the jaeger training academy. When a deal of his goes south, he runs into Amara (Cailee Spaeny), a young girl who was orphaned during the Santa Monica kaiju attack and has been stealing parts to build her own jaeger, Scrapper. The two are arrested, and given the option of jail time or jaeger training at Shatterdome. They choose the latter (obviously). Upon arrival at Shattterdome, Jake runs into his old partner, Nate (Scott Eastwood) and eventually his adopted sister Mako (Rinko Kikuchi). Mako tells Jake that the jaeger program is in danger of being scrapped (again) only to be replaced by drone jaegers developed by Shao Corporation that can be piloted remotely. As luck would have it, a rogue jaeger, Obsidian Fury, attacks Sydney, Australia during Shao Corp.’s presentation, effectively forcing a decision to go with the drones instead. When they find that Obsidian Fury was fitted with a kaiju brain, Shao Corp comes under suspicion, prompting Dr. Hermann Gottlieb (Burn Gorman) to visit his old colleague Dr. Newton Geiszler (Charlie Day) at Shao headquarters to investigate.

Ever since I first saw Guillermo del Toro’s Pacific Rim in a theater back in 2013, I had, like many of the film’s fans, high hopes for a sequel, despite the film’s poor domestic box office. Del Toro had teased us for years that it was coming, and that we had to be patient as financier Legendary Pictures was going through some changes, including alliances from Warner Bros to Universal, and being acquired by the Wanda Group. I began to have a bad feeling when the sequel was finally announced, then pulled, then announced again, but without del Toro listed as director. On its own, Pacific Rim: Uprising isn’t necessarily a bad movie. It’s about on the same level as some of the earlier Transformer films, entertaining with enough humor and action to keep general audiences engaged for two hours. That is also part of its problem. Co-writer and director Steven S. DeKnight, best known for his work on the small screen on television series such as Daredevil and Spartacus and making his feature-film debut, recycles many similar plot points from the first film with little to no originality, much more interested in the machinery than the characters. Dragging in the cadet training often feels like a way of padding the running time and a poor attempt to try and pull in a younger audience. The revelation of the real villain of the piece may come out of left field (it doesn’t), and reminded me of the double-cross in Transformers: Dark of the Moon. If there is a bright side, it has to be the discovery of young actress Cailee Spaeny as the spunky Amara, who manages to go toe to toe with John Boyega in a few scenes. I’m hoping she can find some better projects in the future.

Pacific Rim: Uprising looks exceptional on Blu-ray. The 1080p, AVC-encoded transfer presents the film in its original theatrical aspect ratio of 2.39:1. Colors are bold and vivid with no noticeable blooming or bleeding, while at the same time look natural (well, natural for a futuristic movie, that is). Detail is sharp and crisp without any obvious digital tinkering like edge enhancement or DNR, showing off the intricate textures and wear and tear of the massive jaeger robots. Contrast is also exceptional, offering deep blacks with little to no crushing and bright whites that never appear to clip.

The Dolby Atmos track on Pacific Rim: Uprising will likely rock your system. Sampling the film on both Atmos 5.1.2 and TrueHD 7.1 configurations, the track makes good use of all available channels. Overall, the soundstage is wide and expansive from the get-go, effectively moving objects from one end of the room to the other seamlessly. Heights are engaged throughout, although more noticeably during moments such as November Ajax’s public address announcements as it chases down Scrapper, falling debris, etc. LFE could be a bit stronger here, but I wouldn’t call it anemic. Dialogue is well-prioritized throughout, always clear and understandable without getting lost in the mix.

Audio Commentary with Director Steven S. DeKnight: The track is informative, possibly the best special feature on the disc.

Hall of Heroes (1080p; 3:25): John Boyega very briefly introduces us to the new jaegers featured in the film.

The Underworld of Uprising (1080p; 3:47): Very brief look at the origins of the characters.

Next Level Jaegers (1080p; 5:08): Using concept designs and interviews, this is a mit more in-depth on the design of the new jaegers for this film.

DVD Copy: The movie in 480p and Dolby Digital 5.1, with all of the same features listed above.

Digital Copy: An insert contains a code to redeem a digital HD copy on Movies Anywhere.

Pacific Rim: Uprising isn’t a bad film, it’s just not on the same level as its predecessor. The Blu-ray looks and sounds outstanding, but the special features are nothing more than EPK fluff. 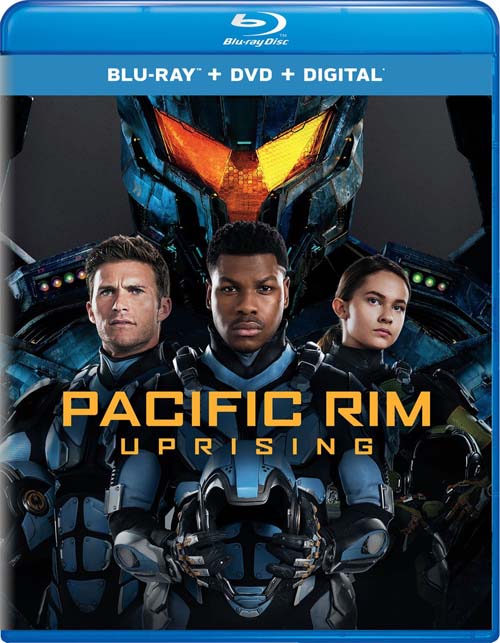