In the third century, during China’s Three Kingdom era, the kingdom of Pei lost the city of Jingzhou when Commander Zi Yu (Deng Chao) challenged Yang Cang (Hu Jun) to a duel and lost. Several years later, the king of Pei (Ryan Zheng) learns that Ziyou has challenged Yang to a rematch as a way to reclaim the city, and strips Ziyou of his title, reducing him to that of a commoner. Trying to save face, the king offers Yang his sister, Xiao Ai (Sun Li), in marriage. Yang then insults the king by agreeing to accept his sister, but as a concubine instead.
But Ziyou is not who he appears to be. During the first duel, Ziyou was badly wounded, and found a doppelganger, Jing Zhou, to take his place while hiding deep within a cave adjacent to his home, training Jing to use the kingdom’s weaponized umbrellas in his battle against Yang.

After the disappointing and US co-production of The Great Wall, Shadow is almost a return to form for director Zhang Yimou, better known for films like Hero, Curse of the Golden Flower, House of Flying Daggers, and Raise the Red Lantern (which was adapted for stage as a Chinese opera). Shadow does take its time to set up its intricate storylines and characters, but once it does, the movie begins to flow with well-choreographed and photographed training sessions, leading to an all out war between the two kingdoms. The cinematography by Zhao Xiaoding (who also shot The Great Wall) could almost be considered black and white, with sparse uses of color here and there but muted for the most part, giving the film an other-worldly feel. This is a beautiful film, rich in story and character.

Shadow was captured at 5K resolution using mostly Red Weapon Helium 5K cameras, then completed as a 4K digital intermediate. HDR10 has been applied to the 2160p transfer used for this release, and makes a big difference over the already excellent Blu-ray (also included in this set). The improved contrast allows for better shading of the mostly grey production design, allowing for more detail to be seen. It also give the swords and weaponized umbrellas a more metallic sheen. This is Well Go USA’s first 4K UHD Blu-ray release, and it is truly a winner.

Well Go USA has provided two soundtrack options, Dolby Atmos in the film’s original Mandarin language and a Dolby Digital 5.1 track (encoded at 640 kbps) in a dubbed English. The Atmos track is subtle yet fully immersive, using mostly atmospherics and acoustics to envelope the viewer in sound. Rain drops can be heard overhead, Zi Yu’s cave reverberates with all kinds of natural sounds and dialogue. This is one of the best uses of spatial audio in an Atmos track.

All of the special features (in Mandarin) can be found on the included Blu-ray version. While it is nice that they have been included here, I often find foreign language featurettes hard to follow.

Shadow is a beautiful piece of filmmaking, and Well Go USA’s 4K UHD Blu-ray exemplifies if even more.

Cool. I just received this as a blind buy from Deep Discount. Good to know it should be worth it.
Expand signature
The purpose of an education is to replace an empty mind with an open mind.
Reactions: Todd Erwin

It's more than worth it.
Reactions: Tino and Todd Erwin

bujaki said:
It's more than worth it.
Click to expand...

Yeah, I need to check this one out. I'll wait until some sale or coupon discount.
Expand signature
Crawdaddy's favorite "The Mandalorian" Quotes: "This is the Way" and "I have Spoken"

Robert Crawford said:
Yeah, I need to check this one out. I'll wait until some sale or coupon discount.
Click to expand...

4K only $17.99 now at Deep Discount. Could be less if there are any current active coupon codes.

Expand signature
The purpose of an education is to replace an empty mind with an open mind.
Reactions: Robert Crawford 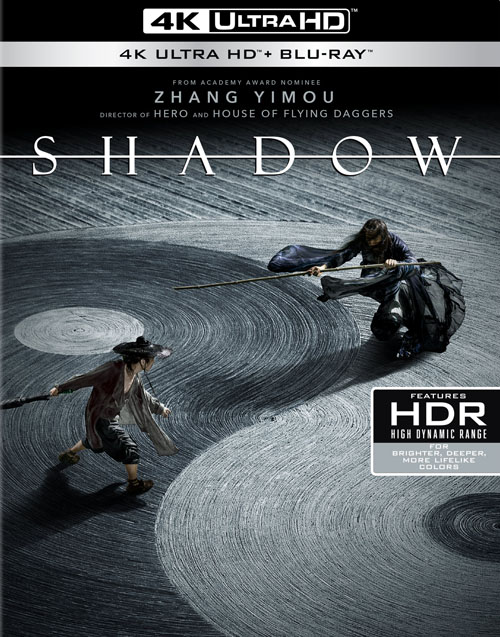