To mark its 25th Anniversary, Universal has released Schindler’s List on 4K UHD Blu-ray with improved picture and sound, as well as two new featurtettes.

World War II is a theme that runs through many of Steven Spielberg’s films, from the USS Indianapolis speech in Jaws, the discovery in the Sonoran Desert of a squadron of planes reported missing in 1945 in Close Encounters of the Third Kind, the hysteria of a post-Pearl Harbor Los Angeles in 1941, Nazis in both Raiders of the Lost Ark and Indiana Jones and the Last Crusade, a group of men making one last bombing run in the Amazing Stories episode The Mission, and a Japanese prisoner of war camp seen through the eyes of a young boy in Empire of the Sun. Legend has it that after the success of E.T.: The Extra-Terrestrial, the head of Universal Pictures, Sid Sheinberg, purchased the rights to Thomas Keneally’s novel, Schindler’s List for Steven Spielberg to direct. Spielberg was very moved by the book, but felt he was not ready to handle such a difficult subject. The director veered from his usual popcorn-style movies to drama, using The Color Purple and Empire of the Sun as training grounds for more dramatic fare, receiving mixed reactions from both critics and audiences. In January of 1993, Spielberg felt ready to tackle Schindler’s List and cameras began rolling in Poland, beginning a long-time collaboration with cinematographer Janusz Kaminsky (who has lensed every movie for the director since).

Schindler’s List tells the story of war profiteer Oskar Schindler (Liam Neeson), who arrives in Krakow shortly after the German invasion in 1939, taking control of an enamel factory and convincing the Nazis to provide him Jews from the ghetto as cheap labor. Schindler is portrayed by Neeson, at first, as an opportunist, charming those in charge around him to get what he needs to turn a profit selling pots and pans to the Germans as part of the war effort. When he begins to see the brutality inflicted on the Jews, particularly by SS leader Amon Goeth (played chillingly by Ralph Fiennes), he has accountant Itzhak Stern (Ben Kingsley) assign 1,100 Jews to his munitions factory in Brinnlitz just as the Nazis begin sending all Jews to their concentration camp in Auschwitz for extermination. Schindler’s List revealed a maturity in Steven Spielberg as an artist, not afraid to show the brutal violence of the Nazis, the darkness of Goeth’s evil heart, or that Schindler was a flawed human being despite his place in history.

Schindler’s List may be the first film shot in black and white to be released on 4K UHD Blu-ray, and just may make a good argument for more classic black and white films to be released in the format. To be fair, the movie does contain a few color and colorized sequences (candle flames and the girl in red), but that actually makes the argument even stronger. I was a theater evaluator for THX when Schindler’s List was first released theatrically in 1993, and what I remember most about the theatrical presentations of this significant film was that, because Spielberg wanted only the colorized and full-color sequences printed on color stock and all black and white printed on black and white stock, each print had to have the color sequences edited in by hand, since black and white printed on color stock would have a bluish tint. This meant that many prints went out to theatres with missing sequences, and one of the reasons for its staggered release (in addition to the subject matter). I remember having to see this film at two different theatres at least three times each until I could confirm that each theater had a complete print. When Kevin Koster reviewed the 20th Anniversary Blu-ray release in 2013, he rated the video 4.5 out of 5, he noted that the cutting from pure black and white to sequences with added color to be rather noticeable (although I found them to less obvious as they were theatrically in 1993). With this 4K UHD transfer, which includes both Dolby Vision and HDR10 high dynamic range, those cuts are seamless when viewed on an HDR10-capable display. The colorized sequences remain subtle, but where this disc really shines is in both clarity and contrast. Detail is greatly improved (not to say the 2013 Blu-ray included in this set was no slouch), with fine texturing on walls to facial features receiving a significant boost. The high level of contrast adds to the heightened detail, where some backgrounds during daytime scenes on the Blu-ray appeared slightly washed out yet on the UHD disc one can easily make out the textures in the plastered walls. The same can be said of darker sequences, with wall textures that blended into blackness on the Blu-ray are much more refined on the UHD. In comparing the UHD to the Blu-ray, I also found the Blu-ray to appear as if it had a very subtle sepia tone, while the UHD was more silver in appearance.

Schindler’s List has been remixed in Dolby Atmos (with a Dolby TrueHD 7.1 core), and it is a noticeable improvement. This is a very performance-driven film, and perhaps for that reason, for the most part, the mix has always been front-heavy, utilizing the surrounds only when absolutely necessary. That is still the case here, but sound placement is much more precise. Overheads are used sparingly, mostly to help fill the listening space more evenly, but also to add more immersion with discrete sounds such as the sounds of luggage being thrown over balconies during the ghetto evacuation or public address announcements inside the camp.

The 4K UHD Blu-ray release of Schindler’s List is a 3-disc set, with a movie-only 4K UHD and Blu-ray disc, and a Blu-ray disc of Special Features.

Voices From the List (480i; 77:30): Ported over from the 2004 DVD release, this documentary features interviews with many of the Schindler Jews.

USC Shoah Foundation Story with Steven Spielberg (1080p; 4:55): The same featurette included on the 20th Anniversary release, but now in high definition with some footage upscaled.

Let Their Testimonies Speak – Stronger Than Hate (1080p; 3:30): New to this edition, a short piece championing positive messages over those of hate.

About IWitness (1080p; 4:03): Carried over from the previous Blu-ray release, a promo for the online education tool.

If you are 4K-capable, this is the definitive version to own. Highly recommended.

Thanks for the review, Todd. Glad to hear this was done right on UHD. It’s on my wishlist just waiting for a price drop. I bought so many titles around the holidays that I may as well wait for the inevitable price reduction, as I have more to watch than time right now.
Expand signature
My DVD Collection

Scott Merryfield said:
Thanks for the review, Todd. Glad to hear this was done right on UHD. It’s on my wishlist just waiting for a price drop. I bought so many titles around the holidays that I may as well wait for the inevitable price reduction, as I have more to watch than time right now.
Click to expand...

@Scott Merryfield See post #3.
Expand signature
Crawdaddy's favorite "The Mandalorian" Quotes: "This is the Way" and "I have Spoken"

Thanks, Todd. I picked up the title back in early June when the price dropped - - although not quite this inexpensive.
Expand signature
My DVD Collection 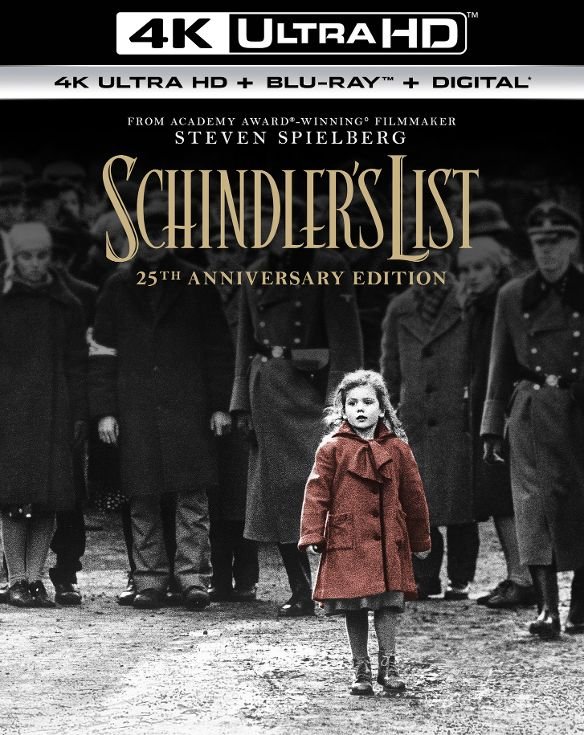