Forum List What's new Dark Style Change width
Log in Register
What's new Search
Menu
Log in
Register
Navigation
Install the app
More options
Dark Style
Close Menu
Posted on January 11, 2017 by Matt Hough
You are using an out of date browser. It may not display this or other websites correctly.
You should upgrade or use an alternative browser.
Lame follow-up to the original action thriller 2 Stars

There are major problems with the made-for-home video Roger Corman’s Death Race 2050 quite apart from the low budget and barely professional production values.

There are major problems with the made-for-home video Roger Corman’s Death Race 2050 quite apart from the low budget and barely professional production values. The movie is pitched at a broad, campy level that negates the seriousness of the action sequences and lessens the impact of all the violence and gore. Even if taken as a black comedy, the camp is too thick to ignore, and with almost everyone playing at cartoon levels of over-animation, it quickly becomes tiresome and perfunctory. Trying to trade in on the nightmarish nihilism of such future-set epics as the Mad Max films or The Hunger Games quartet of movies only makes this video seem pathetic in comparison.

Yes, the transcontinental Death Race is still going on in 2050 with a society of overweight couch potatoes living vicariously through the five killer racers through proxy co-pilots who wear special gear helmets that transmit virtual reality to onlookers to experience the race alongside each of the participants. Four-time champion Frankenstein (Manu Bennett) is being challenged by genetically engineered perfect male specimen Jed Perfectus (Burt Grinstead), holy roller Tammy (Anessa Ramsey), soul sister Minerva Jefferson (Folake Olowofoyeku), and ABE, a supercar powered by artificial intelligence (voice by D.C. Douglas). Along the way, the Resistance forces out to stop these death racers are led by Alexis Hamilton (Yancy Butler) who has a secret weapon, operative Annie Sullivan (Marci Miller) serving as the proxy co-pilot for Frankenstein who will help him wipe out the other drivers and then sabotage him afterwards. She doesn’t count on developing feelings for the guy, however, which makes carrying out her mission very difficult indeed.

There isn’t a single moment of invention or surprise in the script co-authored by director G.J. Echternkamp and Matt Yamashita. We know the attractive Frankenstein and Annie will fight furiously and then fall in love. We know Jed Perfectus will be so driven by male perfection that his sexuality will be always in question. We know the fundamentalist principles that Tammy espouses are as empty as her head since killing anyone who stands in her way is her only reason for existence. The eviscerations, decapitations, and general slaughter are all so telegraphed that there is no surprise, and, worse, look so phony as to cause no sense of dread or shock when they happen. There are no greatly elaborate car stunts that take our breath away, and the cars themselves look rather underpowered and makeshift. True, it’s a small budget these filmmakers are working with, but the special effects to simulate a futuristic world are so artificial looking as to be laughable, and the film’s pacing by director/film editor G.J. Echternkamp never rises above the mundane.

The production has gone out of its way to establish Malcolm McDowell’s Chairman as the same kind of future world megalomaniac combining the roles played by Stanley Tucci and Donald Sutherland in The Hunger Games, but the substance simply isn’t there, and the fine actor finds himself overplaying his scenes ridiculously. Apart from Manu Bennett and Marci Miller who play more or less realistically while swathed in elaborately tight black leather, everyone else in the movie especially Burt Grinstead, Anessa Ramsey, and the two TV anchor persons performed by Charlie Farrell and Shanna Olson overplay their roles to a tiresome degree as well though one must tip the hat to Folake Olowofoyeku who removes her jive talkin’ ghetto girl mask and comes down to earth in a wonderful scene where she and Marci Miller talk one-on-one without the cartoonish attitudes.

The 1.78:1 aspect ratio is delivered in 1080p resolution using the AVC codec, but the transfer’s razor sharpness works against it with the subpar special effects used early on to simulate the futuristic society with fake-looking drones flying overhead and arenas crammed with combinations of real and artificial people. There is lots of detail to be seen in facial features, hair, and the colorful costumes, all captured with outstanding hue control that never blooms. Contrast has been consistently maintained, and the black levels are jet black and most impressive. The movie has been divided into 20 chapters.

The DTS-HD Master Audio 5.1 sound mix is loud. While the incessant rock and rap music supervised by Sean Fernald is an almost constant presence in the fronts and rears, it doesn’t prevent us from catching most of the dialogue which has been placed in the center channel. Atmospheric effects likewise get excellent surround treatment which includes some impressive pans through the soundstage at appropriate moments.

The Look of 2050 (6:29, HD): Roger Corman and director G.J. Echternkamp discuss Peru as their location for shooting the film with the country offering different terrains to simulate various places in America where the action unfolds. The stars and the costume designer also discuss the look of the movie.

Cast Car Tours (8:30, HD): Manu Bennett, Burt Grinstead, Folake Olowofoyeku, Anessa Ramsey, and the voice of D.C. Douglas as ABE give the viewer a tour of each car participating in the race.

Deleted Scenes (5:35, HD): ten scenes may be watched individually or in montage.

Roger Corman’s Death Race 2050 is a lame follow-up to Corman’s original B-picture smash. While the production suffers from its low budget and poor direction, the actors do their best to bring off the outrageously over-the-top black comedy while keeping straight faces. The Blu-ray release offers top video and audio quality for those interested.

Based on the trailer, it seemed much in the same vein as the original (right down to "a dear friend of mine"). Did you see the original? If so, how does it compare?

I saw the original back on first release and never again so I can't make any comparisons.

I loved the first... it was indeed over the top, cheesy and low-budget, but still a lot of fun. I guess I'll wait till this is streamed as I rarely do blind buys these days.

I never saw the 1970s original, but I can say without equivocation that the "reboot" is terrible. Cheap, stupid and borderline unwatchable...
You must log in or register to reply here. 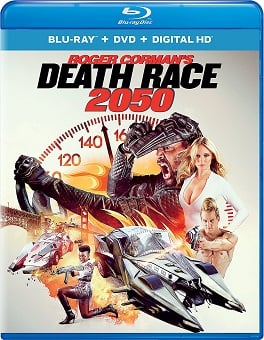