Posted on April 10, 2017 by Richard Gallagher
A beautiful Blu-ray release of a classic western 5 Stars

Sam Peckinpah’s Ride the High Country, one of the cinema’s classic westerns, is now available on Blu-ray with a gloriously stunning transfer from the Warner Archive.

Therefore O harlot hear the word of the Lord: I will judge thee as women that break wedlock and shed blood are judged; I will give thee blood in fury and in jealousy. – Inscription at the grave of Hester Knudsen

It is early in the twentieth century and the Old West is on life support, although vestiges of it still can be found in the town where Ride the High County begins, located at the base of the Sierra Nevadas. Steve Judd (Joel McCrea), an aging former lawman, arrives in town on horseback, where the main street is lined with people on both sides. Steve initially believes that the onlookers are there to greet him, but he is quickly disabused of that notion by a policeman who yells at him to get off the street. It turns out that the town is crowded because there is a carnival going on, and Steve almost gets in the way of a race involving a camel and several horses (the camel wins). After tying his mount to a hitching post he has to step back to avoid being hit by a horseless carriage.

Gazing across the carnival grounds, Steve sees a sign for “The Oregon Kid,” who challenges the locals to test their skill with guns against him. The “Kid” is actually Gil Westrum (Randolph Scott), who in bygone days had often worked with Steve. Gil now is reduced to the role of carnival barker, dressed up like Buffalo Bill and spending his evenings hustling free drinks from people who believe that he was once a famous lawman. Steve pretends to be a stranger but Gil isn’t fooled. After they greet each other Steve explains that he is in town because he has been hired by the local bank to pick up and deliver $250,000 worth gold dust from the mining town of Coarsegold, high in the mountains. He knows that the job, involving a ride of several days in each direction, is too dangerous to be undertaken by one man, and he asks Gil if he can recommend someone.

Gil has a partner, a young man named Heck Longtree (Ron Starr), who rides the camel in the races. Gil once was an honest, upstanding lawman, but his best years are far behind him and he is growing weary of working for dimes and drinks. Transporting a quarter-million dollars in gold is mighty enticing, and he and Heck convince Steve to let them work with him. When Steve goes to see bank president Luther Samson (Percy Helton), he almost is not offered the job when Samson sees how old Steve is. When he is finally offered the contract, Steve insists upon reading it in the privacy of a bathroom because he does not want the bank president to see that he needs reading glasses. Work has been hard to come by in recent years.

Gil has no intention of delivering the gold to the bank. He believes that he can convince Steve that this is their opportunity to finally be compensated for their many years of risking their lives and taking bullets for others. Heck is less certain that Steve can be swayed, but he figures that he and Gil can take down Steve if it comes to that. Gil cautions him that he has no idea how tough a man Steve is.

At the end of the first day of riding they stop at a spread owned by Joshua Knudsen (R.G. Armstrong), who lives there with his daughter, Elsa (Mariette Hartley, in her first film role). Elsa is painfully lonely, and her Bible-thumping father has disapproved of every man who has shown an interest in her. Heck is immediately taken with her, but Steve and Gil try to get him to keep his mind on business. Elsa tells Heck that she is sort of engaged to Billy Hammond (James Drury), who is mining in Coarsegold with his brothers (played with sinister gusto by John Anderson, L.Q. Jones, John Davis Chandler, and Warren Oates).

Randolph Scott and Joel McCrea are superb as the aging ex-lawmen who find themselves operating at cross purposes. In his final film performance Scott plays against type as the anti-hero Gil, and McCrea is entirely convincing as a noble man whose sterling reputation is of little use to him as the world seems to be passing him by. Mariette Hartley is very sympathetic as the lonely young woman. She ruefully complains that she has never been anywhere when Heck talks to her about taking her to San Francisco, Denver or Chicago. Edgar Buchanan turns in a scene-stealing performance as a drunken judge in Coarsegold. Sam Peckinpah once said that R.G. Armstrong “played righteous villainy better than anybody I’ve ever seen.” The inscription on his wife’s grave tells you all you need to know about Joshua Knudsen.

Peckinpah had cut his directorial teeth on television westerns (The Westerner, Zane Grey Theatre), and Ride the High Country proves that he was a natural talent, albeit without the graphic violence which is present in some of his later films. Here he deftly mixes action with humor (check out the scene where Steve tries to figure out where he is supposed to sign the contract without putting on his reading glasses) and makes wonderful use of the spectacular mountain vistas. Ride the High County is a magnificent achievement and is highly recommended.

The 1080p color video is encoded with the AVC codec and is properly framed at 2.35:1. For some inexplicable reason the opening credits are slightly windowboxed, but this is a minor quibble because the rest of the film is nothing less than spectacular. The beautiful cinematography is by Lucien Ballard (Rio Grande, The Wild Bunch, True Grit, The Getaway). The image is very sharp, black levels are excellent, and the grain structure gives this Blu-ray a pleasing, film-like appearance.

Readers are encouraged to read the comments of our resident expert, Robert A. Harris:

A few words about…™ Ride the High Country — in Blu-ray

The English 2.0 mono DTS HD-MA audio is excellent. Dialogue is crisp and clear, and the evocative music soundtrack by George Bassman has nary a hint of distortion. The gunfight scenes deliver a reasonable level of punch.

English SDH subtitles are available and are easy to read.

The extras on this Blu-ray release include the film’s theatrical trailer, which is in reasonably good shape. The colors in the trailer are muted and give an idea of how much work went into the restoring the film’s vibrant look.

A featurette about the life and career of Sam Peckinpah, “A Justified Life: Sam Peckinpah and the High Country,” is in standard definition and has been ported over from the prior DVD release. It features reminiscences by Peckinpah’s sister and is directed by Twilight Time’s Nick Redman.

Also included is an audio commentary track by Nick Redman and film historians/Peckinpah experts Paul Seydor, Garner Simmons, and David Weddle. Among other interesting details, they mention that originally Randolph Scott was to play Steve Judd and Joel McCrea was to be Gil Westrum, but the actors decided that they wanted to reverse their original roles.

Ride the High Country was to be Scott’s last appearance in films, and he certainly went out on a high note. He has been quoted as saying in 1962, “All the old movies are turning up on television, and frankly, making pictures doesn’t interest me too much anymore.”

Ride the High Country is a must-see film for fans of westerns, and now it can be seen in all its original glory thanks to this beautiful Blu-ray from the Warner Archive. It is available at the Warner Archive website or at Amazon. 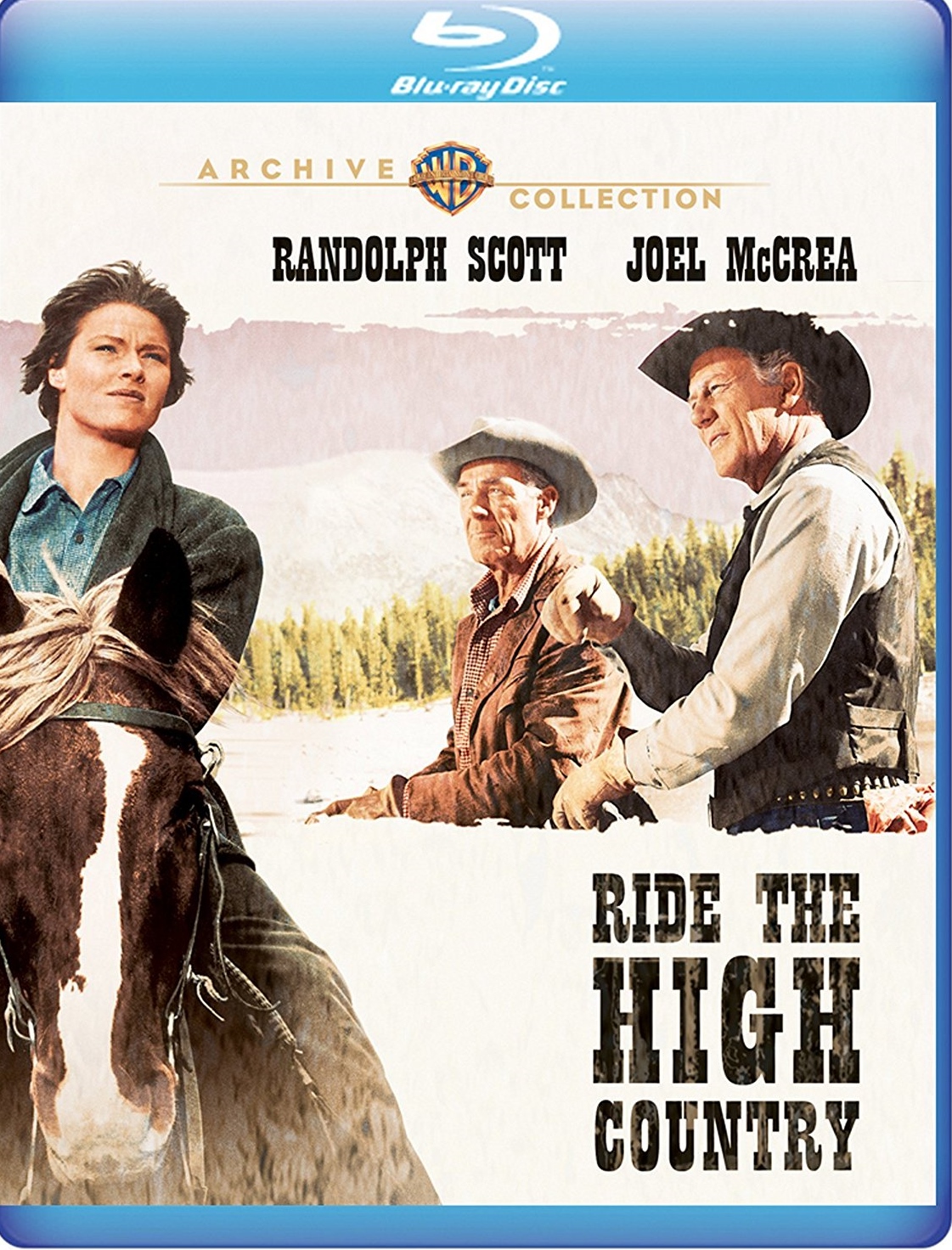