Theodore Melfi’s Hidden Figures brings to light the incredibly impressive achievements of three little known African-American women who contributed mightily to America’s efforts in space exploration. With excellent performances and a keen eye for period details of personal and social impact. Hidden Figures offers not only outstanding entertainment but also hopefully offers inspiration for the next generation of youngsters who might see this and dream of things bigger than themselves.

It’s 1961, and the space race between the Russians and the United States couldn’t be more heated. The computing divisions at NASA have segregated pools of white and black scientists, engineers, and mathematicians all working practically around the clock to find the key to space travel, and among them are three women with special skills: math savant Katherine Gobel (Taraji P. Henson), computer language expert Dorothy Vaughan (Octavia Spencer), and pre-engineer candidate Mary Jackson (Janelle Monáe), all ambitious and hard-working women eager to do their part. Katherine is assigned to Al Harrison’s (Kevin Costner) Space Task Group where she’s assigned to check trajectory calculations and to come up with a new math that will solve the impossible equations necessary for successful launch and reentry. Dorothy is in charge of her black calculator group but without a supervisor’s title or the elevated pay for such a position, a fact that her supervisor Vivian Mitchell (Kirsten Dunst) doesn’t see the need for. Mary longs to earn an engineering degree, but the courses offered in Virginia to achieve such a degree aren’t open to black women. Dorothy and Mary both take matters into their own hands to improve their situations and help fortify their own job security.

Director Theodore Melfi has co-written the screenplay with Allison Schroeder based on the book by Margot Lee Shetterly. Clearly, Katherine’s story, both professional and personal (in her courtship with Colonel Jim Johnson – Mahershala Ali) gets the most attention in the script with less time devoted to the personal and professional stories of Dorothy and Mary, something that may make the film seem a bit crowded around the edges and yet not completely satisfying in terms of telling completely all of these fascinating stories. Katherine’s slow and steady climb through the ranks at the Space Task Group so that she’s inevitably invaluable to the team (and to astronaut John Glenn – Glen Powell – who personally requests Katherine’s assistance in the final check of the calculations for his Mercury mission) is fraught with the ups and downs of the societal prejudice of the era (seen throughout all of the women’s stories), a moment that reaches its climax when she must explain her forty-minute absence to her boss in a wonderfully explosive confrontation about her second class citizenry among her co-workers. Elsewhere, director Melfi squeezes just as much drama out of Glenn’s aborted mission as Philip Kaufman did in The Right Stuff, and moments where each of the women achieves a personal victory in her quest for advancement are excellently presented for maximum audience impact.

Taraji P. Henson inhabits Katherine’s persona with a humble demeanor but unwavering belief in her own abilities and her right to receive respect for the services she’s rendering. There’s plenty of sass in Octavia Spencer’s Dorothy Vaughan, and the movie offers a wonderful early acting performance by Janelle Monáe as the determined Mary refusing to accept the status quo from society or her traditional husband played by Aldis Hodge. Kevin Costner has lots of spirit and a charismatic authority in the work room as Al Harrison, a composite of three actual men who worked at NASA at the time. Jim Parsons is spot-on as the arrogant department head who realizes Katherine’s intellect is superior to his own but isn’t willing to share the credit. Mahershala Ali as the romantic interest for Katherine only pops up in a few scenes for an initial meeting which ends badly, a second attempt where things go more smoothly, and a proposal, all important to Katherine’s personal story but somewhat intrusive when the focus is so clearly on the space race. Glen Powell is an attractive and admirable John Glenn (though without the charismatic magnetism that Ed Harris brought to the part in The Right Stuff), and Kirsten Dunst as the icy, condescending manager makes a great impression as a representation of the era’s unconsciously racist sensibilities.

The film’s 2.39:1 theatrical aspect ratio is faithfully delivered in a 2160p transfer using the HEVC codec. While the UHD transfer offers superb sharpness and lots of details in close-ups and medium shots, the Blu-ray edition seems just a trifle more colorfully saturated though flesh tones are equally outstanding in both transfers and the slightly less saturated color of the UHD transfer may be truer to life. (The prologue sequence with Katherine as a young girl has been desaturated to suggest an earlier era.) The use of HDR in the UHD transfer seems very subtle with very few highlights being noted. The movie has been divided into 28 chapters.

The DTS-HD Master Audio 7.1 sound mix offers outstanding fidelity throughout the soundfield. Dialogue has been masterfully recorded and has been placed in the center channel. The use of the split surrounds for atmospheric effects is quite excellent, and the LFE channel gets a nice workout during the various NASA launches which occur in the movie. Though Pharrell Williams’ hip-hop flavored songs sometimes seem a bit anachronistic to the film’s era, their placement in the film’s available channels along with the background score by Hans Zimmer and Benjamin Wallfisch offers a wide spread in the fronts and rears.

The UHD disc in the set includes the audio commentary by writer-director Theodore Melfi and star Taraji P. Henson, an amiable conversation offering much praise for co-workers and some background information on the locations for filming and memories from the set. The Blu-ray disc also contains this commentary track.

The Blu-ray disc in the set contains the remaining bonus features:

Deleted Scenes (10:14, HD): eight scenes may be watched together or separately and with or without commentary by director Ted Melfi.

Hidden Figures is an entertaining and enlightening movie revealing important historical figures in America’s past who haven’t until now been given their due. With superb video and audio components, this set comes with a firm recommendation. 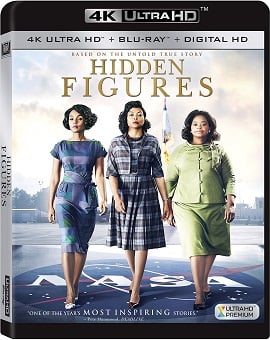