Forum List What's new Dark Style Change width
Log in Register
What's new Search
Menu
Log in
Register
Navigation
Install the app
More options
Dark Style
Close Menu
Posted on March 12, 2020 by Todd Erwin
You are using an out of date browser. It may not display this or other websites correctly.
You should upgrade or use an alternative browser.
Riveting drama 4 Stars

It’s been nearly a quarter century since the bombing in Centennial Park in Atlanta during the Summer Olympics, but most who remember that tragic event likely also remember part of the story of security guard Richard Jewell (Paul Walter Hauser). When we first meet Richard in director Clint Eastwood’s latest film, he’s working his last shift as a supply clerk at a small law firm and meets attorney Watson Bryant (Sam Rockwell). Bryant at first finds Richard very odd, having restocked Bryant’s desk with supplies without his knowledge, even stocking a drawer full of Snickers candy bars after Richard saw some wrappers in Bryant’s trash can. The two become unlikely friends, enjoying a shooter video game in the arcade, and Bryant loaning Richard $100 as emergency money. Richard then jumps from one security guard job to another, either being forced to resign or being fired for his social awkwardness and taking his job a bit too seriously. When the Summer Olympics come to town, Richard is hired by sponsor AT&T as a security guard to help with crowd control during the night time concerts in Centennial Park. When he discovers what appears to be an abandoned backpack, his life is about to change for better, then for much worse. That backpack was loaded with pipe bombs, and while Richard and other security guards and police officers tried to clear concert attendees away from the site, the bombs detonate, killing one person and injuring 111 others. Overnight, Richard Jewell, who had always dreamed of working in law enforcement, went from zero to hero, being praised for locating the bomb and saving the lives of many of the attendees of the concert. But the bombing occurred on the watch of FBI Agent Tom Shaw (Jon Hamm), and after his initial investigation, believes Richard planted the bomb so he could be worshipped as a hero. And just as fast, Richard is stripped from hero to prime suspect, under heavy scrutiny by both the FBI and the world media, thanks to a leak from Shaw to journalist Kathy Scruggs (Olivia Wilde). After being tricked by Shaw and his partner Agent Bennet (Ian Gomez) by asking for Richard’s help in filming a training video which quickly becomes an interrogation, Richard calls in his old friend Watson Bryant to act as his attorney. Bryant has his work cut out for him, though. Not only is Richard socially awkward, he still lives with his mother, Bobbi Jewell (Kathy Bates, who received an Oscar nomination), in a 2-bedroom apartment, has a large stash of guns (as Richard says, “We’re in Georgia”), and is a Chatty Cathy, constantly opening his mouth offering assistance to the investigators or saying things that add on to the pile of possible circumstantial evidence to incriminate him. Rockwell is so good as Bryant that you can see him banging his head against a wall in his mind every time Richard opens his mouth. But Bryant can see right through the FBI’s methods, knowing that Richard is getting railroaded, not only by the FBI but the media as well.

Having known someone who was wrongfully accused, raked through the muck by the media, and seeing how that utterly destroyed his life, Richard Jewell possibly affects me differently than most others who have not had that experience. Paul Walter Hauser portrays Richard socially awkward, but never as a buffoon. While we feel sorry for what is happening to Richard, we also see that due to that awkwardness and taking his job too seriously, that he easily places himself in the crosshairs of the FBI’s profile. The movie does take some liberties (although it was proven that the lead FBI agent leaked Richard as a suspect to Scruggs, it was never proven that he leaked it in exchange for sexual favors), but director Eastwood does his best to keep this from becoming a completely one-sided political message.

Possibly due to the movie’s lackluster box office performance, Warner has decided to release Richard Jewell on Blu-ray, forgoing a physical 4K UHD release (although the movie can be purchased in UHD on digital). Richard Jewell was an all-digital production, captured at 3.4 K resolution with Arri Alexa Mini and XT cameras by Yyves Bélanger (Long Shot, The Mule), and completed as a 4K digital intermediate in the 2.39:1 aspect ratio. The 1080p AVC-encoded transfer is excellent, with natural color tones that are vivid but never appearing oversaturated. Detail is also excellent, with well-defined facial features and fabric textures. Contrast is exceptional, with deep blacks that retain shadow detail and whites that never appear to clip.

The DTS-HD MA 5.1 track is very good, delivering not only clear dialogue throughout, but active surround channels that provide everything from atmospheric crowd noises to discrete flashbulbs (this takes place in the mid 1990s) and door pounding. LFE adds some heft to the Centennial Park explosion and the bass-heavy concert sequences.

We only get two extras, and they are nothing more than EPK fluff, clocking in at roughly seven minutes each.

The Real Story of Richard Jewell (1080p; 6:39): More behind the scenes interviews and footage, focusing more on the real Bobbi Jewell and Watson Bryant and their relationship with the late Richard Jewell.

Richard Jewell tries to set the record straight on the man who should be remembered as a hero. The film features some wonderful performances by Paul Walter Hauser, Sam Rockwell, and Kathy Bates. 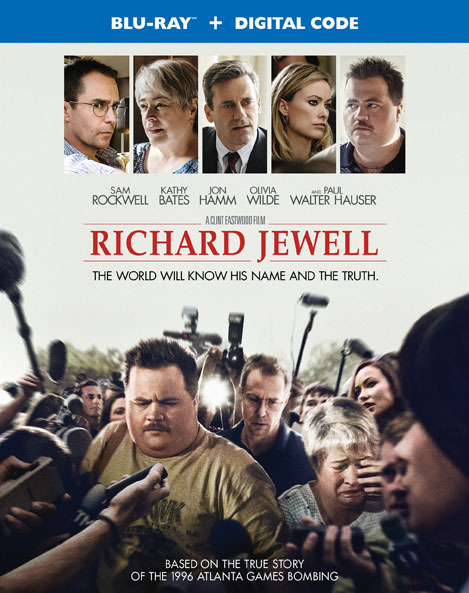