Adapted from an animated short created by Lucas Martell, Spies In Disguise comes from the same studio that brought us the Ice Age films.  Spies In Disguise is a serviceable feature that will entertain younger viewers without taxing the patience of their parents.

Spies In Disguise is the story of nebbish Walter Beckett(Tom Holland) and his technical support of super secret agent Lance Sterling(Will Smith).  Walter’s efforts go awry after he is fired and inadvertently transforms disavowed and fugitive spook Lance into a pigeon.

Every spy team must have a nemesis, which is realized here by Killian(Ben Mendelsohn), a cyborg terrorist with a robotic arm.  Lance and Walter go on the run to foil Killian’s plans, and Lance’s transformation into a pigeon actually helps him in evading capture by his erstwhile employers at H.T.U.V. (Honor, Trust, Unity, and Valor).  Other voices contributing to the film include Rachel Brosnahan, Reba McEntire, Masi Oka, and Mark Ronson.
Spies In Disguise is a fanciful but unexceptional animated feature produced by Blue Sky Studios(Rio, Ice Age).  The film is based on a short entitled “Pigeon Impossible” which was the brainchild of animator Lucas Martell, and has been the critical darling of numerous film festivals.  The screenplay by Brad Copeland (of Arrested Development) and Lloyd Taylor, from a story by Cindy Davis, has some good situational humor, which arises often as not from the other pigeons that have bonded with Lance’s pigeon persona and trail him everywhere, to the suave spy’s chagrin.  Walter’s journey of self-actualization is the theme underlying his quest with Lance Sterling, and is the heart of the story, even if it is somewhat underdeveloped.  Spies In Disguise will suffice to keep the youngsters entertained for its duration, even if it is not the pinnacle of the animated film genre.

Spies In Disguise appears on 4K UHD with HDR10 in its original 2.39:1 screen aspect ratio.  Animated features are beginning to embrace the color palettes and hues that 4K can display.   Blacks are solid with nice fine detail and all of the shadow detail that the animators can conceive is visible in all its glory.

Spies In Disguise is presented in an English Dolby Atmos mix that employs some nice directional audio during the action sequences.  The Dolby Atmos mix delivers music and sound effects with punch, while preserving dialogue at an appropriate volume to be always perceptible, even if the voice actors seem to mumble occasionally.

Special features are relegated to the Blu-ray disc, and include all of the following:
Infiltrating Blue Sky Studios(9:11):  Your guide Trinity takes you physically into the offices and workplace of the studio, with interviews with the directors and creative talent behind the scenes.
The Top Secret Guide to Gadgets(3:57):  This instructional video to spy recruits begins with a faux retinal scan and explains the functions of the gadgets with footage from the film.
“Then There Were Two” Music Video(3:24):  Music video featuring Mark Ronson and Anderson Paak.
“Freak of Nature” Music video(3:45):  Music video featuring Mark Ronson and The Last Artful Dodgr.
Making The Soundtrack “Freak of Nature”(1:30):  Ronson and The Last Artful Dodgr talk about creating the soundtrack.
Gallery:  In categories entitled “Color Keys and Moment Paintings”, “Character Designs”, “Locations”, and “Props and Gadgets Concept Art”.
Theatrical trailer(1:43)
Included also is a paper insert with validation code for viewing the film on mobile devices through the Movies Anywhere app.

Spies In Disguise is an amiable and well intentioned animated film that has enough to appeal to adults as well.  The 4K cideo and Dolby Atmos audio are first rate, and the special features are adequate if not comprehensive.  A welcome addition would have been the original “Pigeon Impossible” short that inspired the film, but at least it is available online for those interested in seeking it out.  Spies In Disguise is agreeable matinee fare for all audiences. 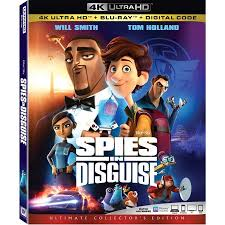