A measured if effective western drama, Henry Hathaway’s Rawhide doesn’t have anything to do with the famous television western series which would come along later in the 1950s, but it nevertheless offers tantalizing performances from a host a fine actors and picturesque western location shooting that adds flavor and color (even in black and white) to the mix.

A measured if effective western drama, Henry Hathaway’s Rawhide doesn’t have anything to do with the famous television western series which would come along later in the 1950s, but it nevertheless offers tantalizing performances from a host a fine actors and picturesque western location shooting that adds flavor and color (even in black and white) to the mix.

When news spreads that noted killer Rafe Zimmerman (Hugh Marlowe) and his gang of three: psychotic Tevis (Jack Elam), would-be dandy Yancy (Dean Jagger), and obedient henchman Gratz (George Tobias) are in the area, the stagecoach supervisor Sam Todd (Edgar Buchanan) won’t allow Vinnie Holt (Susan Hayward) traveling with her baby niece to proceed until the killer’s whereabouts become known. Bunking down for the night in the way station room of assistant Tom Owens (Tyrone Power), she, Tom and Sam are surprised and overtaken by Zimmerman and his men who have arrived and plan to ambush the morning stage which will be loaded with gold. Tom and Vinnie don’t like each other much, but they do everything they can think of to try to get word outside for some help, but all of their efforts seem in vain as they’re outnumbered and surrounded by a leader who’s as smart as they are and a psychopath who’s capable of anything once their backs are turned.

Screenwriter Dudley Nichols has added just enough events to his narrative to keep up viewer interest even though the major activities tried by the captives are spaced out over a long evening and night (trying to use a kitchen knife to burrow through the crumbling adobe wall in the bedroom is a slow and arduous process). And director Henry Hathaway takes those few events and milks them for all they’re worth: a desperate note Tom tries to slip to a passing coach gets away from him and will spell sure death if Zimmerman realizes what he’s up to; the hole in the wall stubbornly refuses to accommodate even Vinnie’s attractively slim waist, the carnal urges of the unstable Tevis must be constantly dealt with; the climactic shootout seesaws unpredictably with good guys and bad alternately gaining the upper hand (and with some surprising events transpiring that first timers won’t see coming). Hathaway also makes great use of the Lone Pine location giving a very isolated and desperate tone to the unfolding events of the story.

It’s an unusual role for Tyrone Power as he’s not portrayed as a superman in charge of everything and fully in control of the situation: he makes greenhorn mistakes and can be bested in a fistfight and a gunfight, unusual for one the studio’s top male stars and an admirable down-to-earth character for him to play for a change. Susan Hayward displays that fire and moxie that are hers alone and never for one moment seems anything less that fully in control. Hugh Marlowe is cast against type as the dastardly Zimmerman, and yet his culture and breeding show through (Tom even comments on it late in the film: Zimmerman may be a killer, but he’s not a barbarian or a roughneck) and he makes an interesting understated villain. More cruel and capable of violence and nastiness is Jack Elam’s scary Tevis, the kind of character whose very unpredictability makes films such as these electric. Veterans Edgar Buchanan, Dean Jagger, and George Tobias make welcome contributions to the overall tone of the piece. Jeff Corey pops up as a stagecoach driver for an amusing scene or two.

The film’s original 1.33:1 theatrical aspect ratio is faithfully rendered in this 1080p transfer using the AVC codec. Though early scenes contain some hairs along the right side of the frame and an occasional bit of dust and some mild scratches, things smooth out soon enough making for a beautiful image. Sharpness is excellent, and the grayscale features good if not quite great black levels and whites which are smooth and true. Contrast has been consistently applied for a very inviting picture. The film has been divided into 8 chapters.

The PCM 2.0 mono track is very typical of its era with a fairly narrow range of fidelity. Dialogue is clear and clean all the way, however, and the music by Sol Kaplan (which makes repetitive use of “Oh, Susannah” every time a stagecoach appears on the scene) and the atmospheric effects of gunshots and galloping horses never conflict with the well-recorded dialogue. Any age-related audio problems with hiss, hum, or crackle has been handled and is not a problem at all.

Susan Hayward: Hollywood’s Straight Shooter (6:49, SD): film historians David Thomson, Gene Arceri, and Chris Langley, among others, offer a brief history of Susan Hayward’s career and fiery personality with some anecdotes shared about experiences on the set of Rawhide.

Shoot It in the Lone Pine! (12:38, SD): a brief history and tour of the famous location where Rawhide (and dozens of other films) were shot is offered by film historians Chris Langley, Aubrey Solomon, Gene Arceri, Rudy Behlmer, David Thompson, and Jack Hathaway, son of the legendary director of the movie.

Restoration Comparison (2:12, SD): a brief split screen comparison of select scenes from the movie in the 2007 film transfer and its digital remaster. 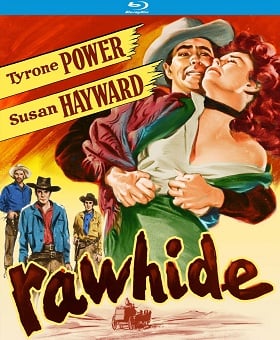