Upgraded sound mix, and nothing else 4.5 Stars

HBO finally makes good on their promise by re-issuing the third season of its highly popular series Game of Thrones, now remixed in Dolby Atmos and packaged in a steelbook case. Unfortunately, nothing else is new in this package. Portions of Cameron Yee’s review of the original Blu-ray release are included.

From Cameron Yee’s review of the original Blu-ray release:

Despite the oily assurances of the sorceress Melisandre (Carice Van Houten), Stannis Baratheon (Stephen Dillane), brother to the late King Robert and aspiring usurper of the Iron Throne of Westeros, was ultimately defeated at Blackwater Bay and forced to retreat to Dragonstone Island, licking his wounds. If not for the canny defense tactics of King’s Hand Tyrion (Peter Dinklage) and the nick-of-time arrival of reinforcements led by Lannister Family patriarch Tywin (Charles Dance), the psychotic King Joffrey (Jack Gleeson) and his mother Queen Cersei (Lena Headey) would no doubt be facing execution rather than maintaining control of King’s Landing.The victory doesn’t preclude change, however, as the elder Lannister immediately takes over as the King’s chief advisor, relegating Tyrion to a corner of the castle to heal from a brutal injury inflicted by one of his own soldiers, presumably under Joffrey’s orders. Tywin has also negotiated the marriage of Joffrey to Margaery Tyrell (Natalie Dormer), in exchange for the support of her family’s army and resources, upending Joffrey’s long assumed betrothal to Sansa Stark (Sophie Turner), but ironically not freeing her from his control. Without the pretense of her one day becoming his queen, she now seems more vulnerable than ever. Thankfully the Tyrell Family includes the formidable matriarch Lady Olena (Diana Rigg), who, while managing to keep the upper hand with the Lannisters, will give Sansa her best chance at getting out from under their thumb.

Meanwhile, Sansa’s sister Arya (Maisie Williams) is still on the run, trying to make her way back to Winterfell, or at least the lands of her allies. Thus far she’s managed to avoid detection, even when posing as a servant to Tywin Lannister himself, but her luck can’t hold out much longer. The closer she gets to home, the more likely she is to be recognized, but loyalty to the Starks isn’t guaranteed as the battle over the Iron Throne has eroded many long held political alliances. Most egregious has been the betrayal of the Stark’s former ward, Theon Greyjoy (Alfie Allen), who took over Winterfell in the name of his father and threatened the lives of the remaining Stark clan, Bran (Isaac Hempstead-Wright) and Rickon (Art Parkinson). The two boys managed to escape with their Wildling servants, but they’re still in danger as they make their way to the Wall in hopes of finding refuge with the Night’s Watch. Relationships within the Stark Clan have had their problems as well, as Catelyn Stark (Michelle Fairley) has undermined the authority of her son Robb (Richard Madden) by freeing Jaime “The King Slayer” Lannister (Nikolaj Coster-Waldau), the only real leverage they had against his family. By sending Jaime back to King’s Landing with her personal bodyguard Brienne of Tarth (Gwendoline Christie), Catelyn hopes to ensure the survival of Sansa and Arya, whom she hasn’t seen since they left Winterfell with her late husband Ned. Though Catelyn’s actions have alienated her from her eldest son and jeopardized the family cause, Robb has created his own controversy by marrying the healer Talisa Maegyr (Oona Chaplin) instead of one of the daughters of Walder Frey (David Bradley), a marriage that would have created an invaluable political alliance. Robb’s passionate, but ultimately foolish, decision will have far reaching implications for House Stark and the rule of the Northern Kingdoms.

In the more isolated territories of the frozen wasteland beyond the Wall and the arid climes of Essos, armies continue to amass with the goal of uprooting Westeros’ existing power structure, as embattled as it is. In the North, Wildlings are gathering under the leadership of former Night’s Watch commander Mance Rayder (Ciaran Hinds). Ned Stark’s illegitimate son Jon Snow (Kit Harington) has managed to infiltrate Rayder’s army by claiming defection from the same military brotherhood, but his loyalties will become truly divided as he’s immersed in the Wildling culture and begins to fall in love with his former prisoner, the fiery Wilding woman Ygritte (Rose Leslie). To the east, the Queen of Dragons Daenerys Targaryen (Emilia Clarke) and her advisor Jorah Mormont (Iain Glen) are looking to buy an invasion force and have in mind the Unsullied, eunuch slaves trained from birth for the sole purpose of combat. As Daenerys sees their brutal upbringing firsthand, however, she begins to look beyond simply acquiring an army, but engendering a following of true believers, a kind of devotion that can’t be bought. As bloody as the conflict has been in Westeros, such passion is missing from its squabbling factions, making the day when House Targaryen finally crosses the Narrow Sea the beginning of a long anticipated dominion.

The third season of TV’s most pirated show continues the addictive trajectory set in its first season and solidified in the second, amping up the political maneuverings at King’s Landing with the arrival of the Tyrell Family’s shrewd Lady Olena, played with a don’t-mess-with-me charm by Rigg. Olena’s granddaughter Margaery takes a much more subtle, and seductive, approach by comparison, but proves a force to be reckoned with in her dealings with the love-to-hate-him Joffrey and his increasingly unhappy mother. As with Olena, Dormer is perfectly cast for her role, combining an undeniable natural beauty with an effortless charisma. The show also continues to make some fantastic character pairings, the most entertaining and unexpectedly touching of which is the odd-coupling of Brienne and Jaime. Their cross country travel, fraught with peril, humanizes and endears them, first with the audience and then with each other. Viewers can’t help but wish for more from the moment the pair reaches the end of its journey. A similar odd couple tone is set with the later partnership of the brutal soldier known as the Hound (Rory McCann) and Arya Stark. Daenerys’ story, which tended to languish in past seasons, also sees a notable improvement with the character finally finding both her purpose and voice. Her pursuit of the Unsullied and ultimately their emancipation sets her up as a legitimate dark horse in the fight for the Iron Throne, rather than just a distraction from the primary players, who seem more and more likely to implode from their relentless, bitter rivalries. Leading into the fourth season, the politics between the various Westeros factions remain a primary point of interest and intrigue, particularly with the ever-changing dynamics at King’s Landing but now with the dramatically altered makeup of its opposing forces. The next season also promises to pay off on some long gestating elements, namely the full blown return of the supernatural creatures known as the White Walkers, as well as the arrival of Daenerys and her followers on the beleaguered shores of their enemy.

This Limited Edition Steelbook release contains the same video encodes as the previous Blu-ray edition, as noted by Cameron Yee:

Presented in its original broadcast aspect ratio of 1.78:1, the 1080p, AVC-encoded transfer doesn’t look much different from past releases with its inky blacks and uncompromised contrast. Some forest scenes can seem a bit drab in comparison to the other locations, especially the high contrast environment of the Wildlings, but there’s no doubt that’s by design. Color is incredibly rich, most notably in the sunny settings of the eastern territories and King’s Landing, where the pastel hues of the Tyrell wardrobe come through beautifully. Detail is likewise impeccable, though there are some hints of noise in more challenging images like the tightly concentrated, high contrast patterns in the North. Still, the picture is often quite breathtaking and no doubt superior to either broadcast or streaming presentations.

Here is where the main difference lies between the original Blu-ray release and this Steelbook edition, with all of the episodes remixed in Dolby Atmos which contains a Dolby TrueHD 7.1 core. Even those without Atmos or a 7.1 setup will appreciate the stronger LFE presence on this set compared to the anemic low-end of the DTS-HD MA 5.1 mixes on the original release. Dialogue is clear and understandable, directed mostly to the center channel (with some occasional panning effects). Like the previous release, the episodes can contain some fairly aggressive surround activity, but with the additional channels in the TrueHD 7.1 core, even when played back in 5.1 and ProLogic IIz (with front heights), it is a much more immersive experience. As with the previous Steelbook editions of Seasons One and Two, my real complaint here is that the default soundtrack is in lossy Dolby Digital 5.1, and one must go to the Audio menu and select Dolby Atmos to experience a lossless track (the Atmos track will default to TrueHD 7.1 if your receiver is not Atmos compatible).

For the most part, this edition contains all of the same video-based features and audio commentaries as the previous release (even the menus are the same). The printed episode guide is missing here, but you do get a sigil magnet of The Twins.

Previews and Recaps: Episodes include the “previously” and “next” on promos that originally aired with them.

In-Episode Guide: The exhaustive compendium provides descriptions of the show’s characters, locations, and history in context with events of each episode. Most of the information is in text form, but the histories come in video form and are unlocked as one progresses through the episodes (hint: if you don’t want to bother with the unlocking part, all the videos can be accessed on Disc 5).

Disc Four:
The Rains of Castamere (46:36, 1080p): A picture-in-picture commentary feature for the pivotal ninth episode includes interviews with the cast and crew, character and story analysis, and behind-the-scenes video from production.

Disc Five:
The Roots of Westeros (1080p): The exhaustive interactive guide provides information (mostly textual) on each of Westeros’ major regions, including the North, the Westerlands, the Riverlands, the Stormlands, the Vale, the Reach, the Wall and Beyond, and Across the Narrow Sea. Each region is further subdivided into geographical locations, the noble houses, and major events in their history. Considering there are entire wikis dedicated to the Game of Thrones mythology, the feature doesn’t offer anything new, but the amount of information is impressive nonetheless.

Inside the Wildlings (6:21, 1080p): Takes a look at the legendary people living north of the Wall.

The Politics of Marriage (8:38, 1080p): Examines the season’s various unions made for political gain, from Joffrey and Margaery to Tyrion and Sansa, as well as the fallout from breaking one’s vow.

Owners of the original set may want to consider trading in for this slightly upgraded set if they want a superior audio experience and free up some shelf space once you remove the Steelbook from its clear plastic shell. Otherwise, the content is identical, however going forward with the release of Season Five, the remaining seasons will be released in Dolby Atmos. 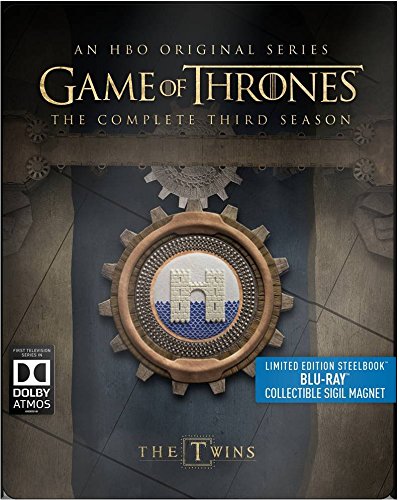