Historical fiction's history is more interesting than its fiction. 3.5 Stars

An uninspiring love triangle played out against the backdrop of the first year of World War I in Turkey with a special emphasis on the Armenian Genocide phenomenon forms the core of Terry George’s The Promise.

An uninspiring love triangle played out against the backdrop of the first year of World War I in Turkey with a special emphasis on the Armenian Genocide phenomenon forms the core of Terry George’s The Promise. An affecting look at a dark period of mass extermination that is too little known, The Promise offers fine acting and a handsome production but with a focus that never seems to know where it wants to spend the majority of its time.

Ambitious medical student Mikael Boghosian (Oscar Isaac) is offered the opportunity to attend medical school in Constantinople when he becomes betrothed to Maral (Angela Sarafyan) and uses the four hundred gold coins of her dowry to finance his studies. While there, he meets beautiful tutor Ana Khesarian (Charlotte Le Bon) in late 1914, and their shared Armenian heritage sparks an attraction that explodes into a romantic rivalry between Mikael and Ana’s boyfriend Chris Myers (Christian Bale), an American photojournalist who’s dedicated to exposing the truth of the Turkish involvement in World War I and their attempts to use the war as an excuse to wipe out the Armenian culture. As the Ottoman Empire crumbles into war-torn chaos, the three lovers find their passions must be deferred as their efforts to remain safe remove them from each other’s orbits while they individually struggle to get themselves and their loved ones to safety.

Director Terry George co-wrote the screenplay with Robin Swicord, but the various adventures of the invented trio of lovers embroiled in this historical fiction (one ends up in a work camp for a time; one is imprisoned and sentenced for execution as a spy; all witness horrendous acts of genocide against Armenian men, women, and children) seem rather unimportant and uninteresting in light of the atrocities being committed against a people out of pure jealousy and hatred by those in control. And George and Swicord make sure to keep the two male rivals rather equal in the stained character department: Mikael makes love to Ana knowing he has a fiancé back in his village and has used her father’s dowry money for purposes other than what was intended; Chris is a hard drinker and prone to angry jealousy asserting claims on a woman who isn’t legally his to claim, and yet both men are more admirable than despicable: both fight for what’s right despite intense danger for themselves, their hearts always in the right place and both come inches from death on several occasions. Director George handles the attack scenes near the climax with the mounting suspense they deserve, but neither the script nor the screen notations give us a firm idea exactly how much time is passing during the event-crammed scenario. Still, the Spanish locations that double for Turkey are impressively captured and in respites between atrocities, the landscapes have an overpowering beauty.

Oscar Isaac is most effective as the top-billed star of the film, eager and intelligent and committed as Mikael Boghosian. As his chief rival, Christian Bale offers another brooding if dedicated character to his resume as Associated Press reporter Chris Myers and always manages to retain audience sympathy despite some less than admirable personal habits. Charlotte Le Bon is a lovely object of desire as Ana Khesarian, but her dramatic arc is quite obviously less explored than those of her two suitors. Shohreh Aghdashloo adds her usual warmth and great sympathetic presence as Mikael’s mother Marta, and Marwan Kenzari has charisma to spare as Mikael’s good-time Turkish friend Emre Ogan who surprisingly becomes a martyr for the cause he’s not even interested in. An almost unrecognizable Tom Hollander has a moving cameo in the prison work camp with Mikael, James Cromwell does impressive work in a cameo moment as the American ambassador, and Rade Serbedzija as an Armenian freedom fighter makes the most of his several scenes in the film’s climactic race from the Turks and standoff at Musa Dagh.

The film’s 2.40:1 theatrical aspect ratio is faithfully represented in this 1080p transfer using the AVC codec. Sharpness is outstanding with mounds of details to be seen in facial features, hair, beards, and costumes. The early pre-war scenes offer rich, warm color that is almost mesmerizing in its controlled brilliance, and contrast has been applied for a consistently exciting-to-watch image. Black levels are especially fine. The movie has been divided into 20 chapters.

The DTS-HD Master Audio 7.1 sound mix gives a real epic sense of weight to the sound design. Dialogue has been beautifully recorded and has been placed in the center channel. Gabriel Yared’s background score covers all of the emotional bases and gets a brilliant spread through the fronts and rears. Split atmospheric effects from the explosions and gunfire of war through powerful storm sequences have been threaded magnificently through the soundfield.

Audio Commentary: director Terry George and producer Eric Esrailian share the track with George doing by far the most talking. He spends much of the commentary describing what’s on screen with added psychological insights into the characters’ behaviors at various intervals.

Deleted Scenes (6:13, HD): three scenes may be watched together or separately and with or without commentary from director Terry George.

War and Struggle (2:51, HD): director Terry George offers brief background on the early months of World War I in Turkey as reflected through the characters he has written. Oscar Isaac and Christian Bale also make brief comments.

A Cause (3:19, HD): the purpose of exposing the Armenian Genocide is revealed as a primary focus of the movie by director Terry George and actors Christian Bale, James Cromwell, and Oscar Isaac.

A fascinating epoch in history often overlooked or whitewashed gives The Promise a weight of importance that its central love triangle never quite reaches. The Universal Blu-ray release offers beautiful image quality and superb sound design making this a film that fans of the stars or of historical fiction might well want to explore.

Watched this last night On Demand. I agree that it's "An uninspiring love triangle" but, I think they did that on purpose. What happened to Armenia and it's people is the main story. Very depressing. Reminds me of the Jews in WW II.
Expand signature
Roland Lataille
Cinerama web site
You must log in or register to reply here.
Share:
Facebook Twitter Reddit Pinterest Tumblr WhatsApp Email Link 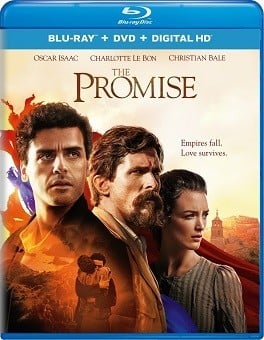