Forum List What's new Dark Style Change width
Log in Register
What's new Search
Menu
Log in
Register
Navigation
Install the app
More options
Dark Style
Close Menu
Posted on April 30, 2018 by Todd Erwin
You are using an out of date browser. It may not display this or other websites correctly.
You should upgrade or use an alternative browser.
Not your grandfather's Peter Rabbit 4 Stars

Beatrix Potter’s classic children’s stories get a modern-day updating in Peter Rabbit, a live action/computer animated comedy from Will Gluck, the director of Easy A.

Peter (voiced by James Corden), his triplet sisters Flopsy (voiced by Margot Robbie), Mopsy (voiced by Elizabeth Debicki) and Cotton-Tail (voiced by Daisy Riley) along with cousin Benjamin (voiced by Colin Moody) love to wreak havoc and steal vegetables from old man Mr. McGregor’s (Sam Neil) garden, knowing that his next door neighbor, animal-loving Bea (Rose Byrne), Is close by to bail them out. One day, Peter overstays his welcome and gets caught by Mr. McGregor, who then succumbs to a heart attack due to his poor lifestyle choices (depicted in a very humorous montage). Peter and the rest of the animals of Windemere through a huge party, believing the farm is now theirs and completely trash the house. Little do they know that Thomas McGregor (Domhnall Gleeson), a long lost relative and recently fired from his job in the toy department at Harrods, is heir to the estate. Thomas only wants to spruce the place up and sell the property so he can open a toy store of his own next to Harrods (to put them out of business). Thomas hates rabbits, but also has eyes for Bea, placing Peter in an all-out war for both the farm and Bea.

I really have mixed feelings about this “adaptation” of Peter Rabbit. Co-writer/Director Will Gluck (Easy A) tries to meld Beatrix Potter’s turn-of-the-century tales told in watercolor pastels with Home Alone, bringing the classic characters into the 21st century. This includes some crude jokes, such as Peter trying to place a carrot in Mr. McGregor’s exposed plumber’s crack early on, and slapstick antics of Thomas’ home being booby trapped by the four rabbits. There is a nice homage to the original illustrations found in Beatrix Potter’s books during the introduction of Bea, however the rest of the movie is tailored for more modern audiences with shorter attention spans. Don’t get me wrong, there is a lot of humor that works in the film, including the Home Alone inspired slapstick. It’s just a little surprising that the Beatrix Potter estate fully endorsed the project. The vocal talent are all very good, especially Corden, never sounding like actors reading lines of dialogue. The character animation by Animal Logic is practically flawless, delivering believable if not stylized animals that blend in seamlessly with the live action photography. While Thomas is not much more than a caricature, Domhnall Gleeson seems to be having a lot of fun playing this character over the top and reacts and interacts with the CG animals believably. Rose Byrne is delightfully charming as Bea, also interacting with Peter and his siblings seamlessly. Peter Rabbit has enough laughs for young and old alike, but some of the humor may be a bit questionable for very young audiences and fans of the original books may be somewhat offended.

Peter Rabbit was captured digitally at 3.4K resolution on Arri Alexa XT cameras and completed as a 2K digital intermediate with Dolby Vision high dynamic range in select theatres. Sony’s UHD Blu-ray contains an upscaled 2160p transfer, retaining the film’s theatrical aspect ratio of 2.39:1, with HDR10 high dynamic range (there is no mention of Dolby Vision on the packaging and my equipment is not capable of Dolby Vision playback). Even though this is an upscale, this UHD version is a major step upwards from the included Blu-ray. Colors are more vibrant and natural, as expected, resulting in lusher greens in particular. Contrast is also improved, with deeper blacks and brighter whites that are instantly noticeable. There is also a major uptick in detail, quite noticeably in the individual hairs in the fur of the CG animals. The image also has a more perceived depth, with the Blu-ray looking rather flat in comparison.

Peter Rabbit was mixed in Dolby Atmos for its theatrical presentations, and an Atmos track has been included on the UHD Blu-ray. Although not necessarily a showy track, it is wide and expansive, using the heights mostly to fill out music and atmospherics, with only occasional discrete use such as bird flyovers. Surrounds are used effectively especially during the many chase and action sequences. Dialogue is clear and understandable throughout, spreading across the front soundstage for the most part.

All of the special features can be found on the included Blu-ray disc.

Shake Your Cotton-Tail Dance Along (1080p; 2:36): Several kids dance with animated characters from the film to the song I Promise You performed by James Corden.

Flopsy Turvy (1080p; 3:55): The triplets have their own brief adventure in this newly created short.

Peter Rabbit has enough laughs for young and old alike, but some of the humor may be a bit questionable for very young audiences and fans of the original books may be somewhat offended. Video and Audio presentation are exceptional, as expected with Sony UHD releases, although the special features are somewhat lacking.

This review summed it up best for me: 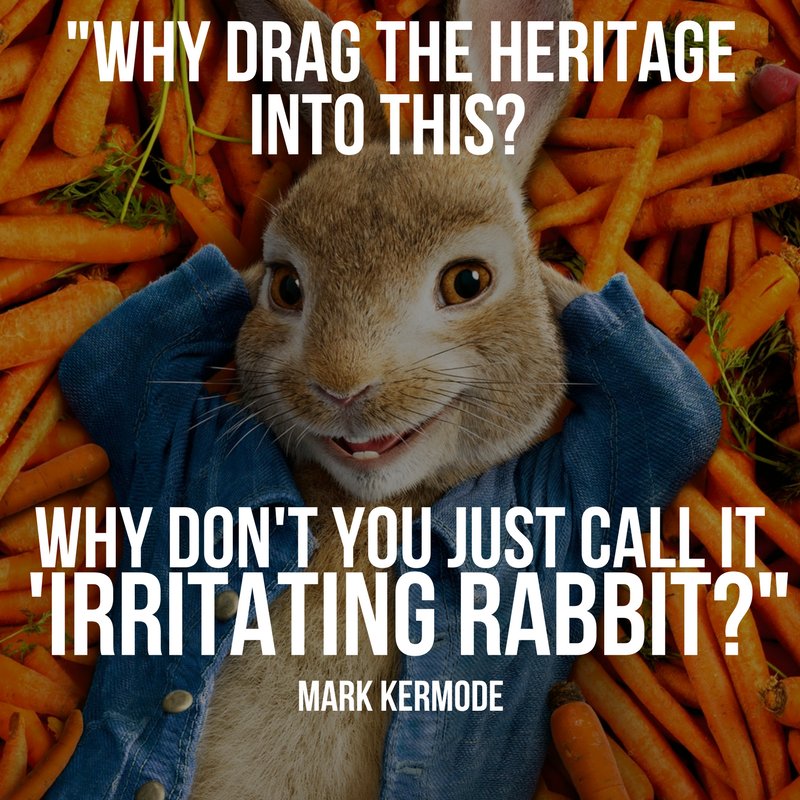 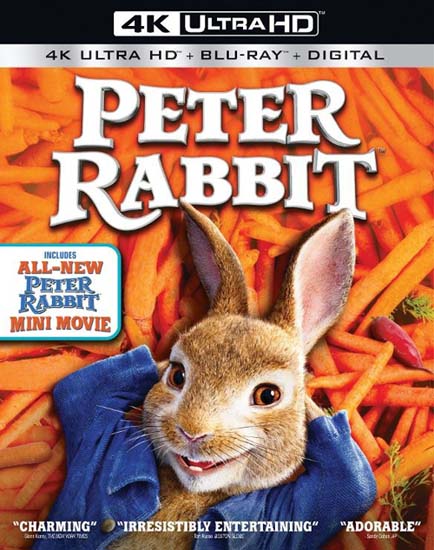