Posted on February 3, 2016 by Kevin EK
Pawn Sacrifice checkmates itself on Blu-ray with an edition that presents this well-meaning film as best it can. 2 Stars

Pawn Sacrifice sadly squanders what could have been a compelling film idea and settles for the draw of something far more ordinary.

Pawn Sacrifice sadly squanders what could have been a compelling film idea and settles for the draw of something far more ordinary. Director Ed Zwick has set out to recreate the 1972 “Match of the Century” between American chessmaster Bobby Fischer (played by Tobey Maguire) and Russian chess champion Boris Spassky (played by Liev Schreiber). The movie certainly looks good in its period clothing, and it sounds good, with a fair number of familiar period rock songs to shake up the soundtrack. But it never really gets beneath the surface of the minds of people like Fischer or Spassky. There are occasional feints toward the competitiveness within both men, and the madness and anger within Fischer, but nothing that scratches more than a few millimeters down.   Tobey Maguire does his earnest best, but is simply unable to give us more than a hint of the bravado and the inner chaos that drove Bobby Fischer. The movie is a significantly lost opportunity, given the talents of Maguire and director Zwick, leaving fans of Fischer and chess to wait for another, stronger film to actually deal with this story with the complexity that it deserves.   Stranger things have happened. A few years ago, we were shown the unfortunate movie Jobs, which barely touched the surface of the life of Steve Jobs. And then this past fall, we were given a better film (albeit flawed) called Steve Jobs, that went a fair distance toward correcting the mistakes of the earlier attempt. Hopefully, someday we’ll see a better, deeper examination of this story.

The Blu-ray of Pawn Sacrifice has been available to home theater viewers since December. Universal and Bleecker Street clearly have not had too many hopes for this release, as both the Blu-ray and DVD have been offered separately, with only a tiny three-minute featurette as a special feature. Instructions for downloading a digital copy of the movie are included on an insert in the packaging.

Pawn Sacrifice is presented in a 2.40:1 1080p AVC transfer (avg 34 mbps).   The transfer looks great, picking up many period details such as the threads in the clothing and the décor in the rooms. The movie’s small-ish but workable budget is clearly on the screen with a nice variety of period locations for the viewer to see.

Pawn Sacrifice is presented in an English DTS-HD Master Audio 5.1 mix (avg 3.5 mbps, going up to 4.7 mbps in the scenes where the 70s songs kick in). This is not a particularly loud mix, given that much of the film consists of people talking to each other or playing chess – but there are multiple opportunities for the music to fill the surround speakers. And there are a few moments of paranoia for Fischer that give some opportunity for the sound mix to become extremely spare and specific. I note that this is the only sound mix on the Blu-ray. No other languages are available.

Pawn Sacrifice comes with a only a single, short featurette on the making of the movie for its offering of special features.

Bobby Fischer, the Cold War and the Match of the Century (3:17, 1080p) – This short featurette is the only special feature on the disc, and half of it consists of clips from the movie’s trailer, sadly. There are a few quick soundbites from director Ed Zwick and star Tobey Maguire, but nothing that really gets beyond a quick introduction from the simplest EPK materials.

The film and featurette are subtitled in English and Spanish. The usual pop-up menu is present, along with a complete chapter menu.

Pawn Sacrifice just isn’t the movie that it perhaps could have or should have been. There just isn’t enough substance here to justify spending two hours in the company of this shallow a treatment of the story of Bobby Fischer and Boris Spassky. The Blu-ray at least offers the movie in the best possible high definition treatment it can. But the movie itself isn’t enough to motivate a purchase here, and the paucity of special features to explain the situation makes the release impossible to recommend. 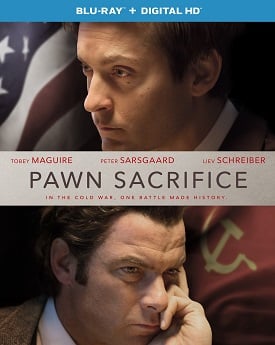