Suffused from beginning to end with rap both sensitive and profane, Geremy Jasper’s Patti Cake$ makes the most of its familiar show-biz wannabe narrative complete with ingratiating performances and a production that’s as authentic in look and feel as a film can be.

Stuffed with rapping and hip-hop sounds from beginning to end, Geremy Jasper’s Patti Cake$ is no different from A Star Is Born or Saturday Night Fever or Flashdance, all about dreamers hoping for something more out of life than they currently have, looking to a career in show business for their personal and professional satisfaction. It’s also authentic Jersey from top to bottom, too, with tough street kids and plain-spoken adults storming through life with a bluntness and in-your-face attitude that could make weaker folks crumble.

Patti “Killa P” Dombrowski (Danielle Macdonald) spends her days crafting rhymes behind the bar at a local saloon, trying to pay off her coarse but beloved Nana’s (Cathy Moriarty) medical bills and support her hard-drinking mom Barb (Bridget Everett) whose own musical aspirations never met expectations long ago. Patti and her rap partner/best friend Jheri (Siddharth Dhananjay) share dreams of fame, fortune, and escaping New Jersey for good, but they haven’t found a producer or made that connection that could lead them to the big time. Interested in all kinds of rap, Patti surprisingly finds herself drawn to a reclusive goth-metal musician named Basterd (Mamoudou Athie), an undiscovered talent who just might be able to help Patti achieve the hip-hop recognition that she so desperately craves if she can find time to fit in her music career amid her shifts at the bar and sideline work as a cater-waiter where she hopes to make some show business connections.

You simply have to admire writer-director Geremy Jasper who has cast his three leading role rappers with two people with no experience at all in the music industry: Australian Danielle Macdonald who had to bury her own accent while learning a new one and learning how to rap convincingly with experienced rapper Siddharth Dhananjay and Mamoudou Athie who had no experience playing the instruments his character is supposedly expert with. While all three more than live up to expectations and are completely convincing in the rap milieu, Jasper’s direction is much more inventive than his screenplay, a basic struggle-for-success scenario that follows the ups and downs of other show biz sagas complete with initial rejection despite a scrappy willingness to do anything to succeed, a coming together of talents to achieve something new and interesting (their group becomes known as P B N J, the initials of Patti, Basterd, Nana, and Jheri), the expected meltdown, and the comeback at a rapper contest called Rookie Monster. There is romance along the way, too, and parental interference (Patti’s mother was a blues singer who doesn’t consider rap to be music, but, naturally, she comes around) to muddy the waters, but the family’s money worries are swept under the carpet after they’ve been such a pertinent conflict in the movie, a definite script weakness. But Jasper’s inventive direction is really something, from Patti’s many flights of fancy as she dreams of wowing master rapper O-Z (Sahr Ngaujah) to levitating off the street in her own world of hip-hop. Jasper mixes black and white and color fantasies, too, in series of very creative visuals that give the movie a most unique style.

Danielle Macdonald gives a terrific performance as the driven, hard-working Patti, occasionally letting down her tough guard to show us her vulnerability when the local punks call her “Dumbo” once too often. She also has great rapport with all of the other principals in the cast from Siddharth Dhananjay’s sweet, concerned Jheri to Mamoudou Athie’s mumbling, closed-off Basterd, Bridget Everett’s ball-busting mom Barb, and Cathy Moriarty’s tough and tender Nana. McCaul Lombardi is a local street punk/rapper whom Patti obviously likes but finds herself the butt of his jokes which turn cruel when she continually one-ups him in street rhyming contests.

The film’s 1.85:1 theatrical aspect ratio is faithfully rendered in a 1080p transfer using the AVC codec. Sharpness is superb with plenty of detail and texture in facial features, hair, and clothes. Color is richly saturated but controlled with very believable skin tones. Contrast has been expertly applied for a top-notch picture. The movie has been divided into 32 chapters.

The DTS-HD Master Audio 5.1 sound mix makes certain that the Jersey rap scene, whether it’s in bars, strip joints, clubs, or auditoriums, resonates on the soundtrack with the music and ambient effects filtered through the fronts and rears and voices clearly contained in the center channel. The mix puts the listener right into the heart of these venues and yet also is true to the atmospheric nature of the streets as well.

Audio Commentary: writer-director Geremy Jasper details the fifteen-year journey to get his pet project to the screen and recalls interesting anecdotes of the production as each scene appears.

A Slice of Cake$ (21:28, HD): a production featurette featuring various members of the cast and crew discussing the story and characters. Among those speaking are director Geremy Jasper, producers Michael Gottwald and Noah Stahl, and actors Danielle Macdonald, Siddharth Dhananjay, and Mamoudou Athie.

Lyric Video (1:33, HD): the first improvised rap between Patti and Jheri is shown with superimposed lyrics on the screen.

Production Featurettes (HD): four brief featurettes promoting the movie detailing various aspects of the production. Appearing in all or most of these are director Geremy Jasper and actors Danielle Macdonald, Siddharth Dhananjay, Bridget Everett, Mamoudou Athie, and Cathy Moriarty.

Gallery: thirty-one stills and production photos may be watched automatically or manually.

Suffused from beginning to end with rap both sensitive and profane, Geremy Jasper’s Patti Cake$ makes the most of its familiar show-biz wannabe narrative complete with ingratiating performances and a production that’s as authentic in look and feel as a film can be. For hip-hop fans who want to view an interesting character study, recommended. 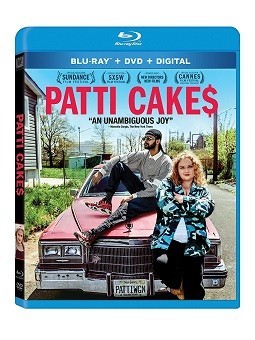