Posted on April 29, 2016 by Matt Hough
A somber, authentic realization of a mystery masterpiece 4 Stars

One of the true masterpieces of mystery fiction and unquestionably one of the half dozen greatest novels penned by Agatha Christie, And Then There Were None finally gets an adaptation of the original book worthy of the cunning and often darkly malevolent mind of its creator.

One of the true masterpieces of mystery fiction and unquestionably one of the half dozen greatest novels penned by Agatha Christie, And Then There Were None finally gets an adaptation of the original book worthy of the cunning and often darkly malevolent mind of its creator. The four feature film versions of the story were all based in large part on Mrs. Christie’s 1943 stage adaptation of her work which changed the book’s ending making the fates of some of the central characters something much less sinister and blood curdling than were contained in the original tome. Now, in an era where nothing need be softened or cleaned up, director Craig Viveiros and writer Sarah Phelps can offer up all the lambs to the slaughter as they were originally envisioned.

Ten people are lured to the remote and storm-ridden Soldier Island off the coast of Devon under one pretext or other, most of whom are unfamiliar with one another but all of whom are guilty of one or more crimes which, up until now, have been undetected and have gone unpunished. The party’s host U. N. Owen has brought together Doctor Edward Armstrong (Toby Stephens), Detective Sergeant William Blore (Burn Gorman), soldier of fortune Philip Lombard (Aidan Turner), judgmental spinster Emily Brent (Miranda Richardson), Judge Lawrence Wargrave (Charles Dance), reckless playboy Anthony Marston (Douglas Booth), General John MacArthur (Sam Neill), secretary/governess Vera Claythorne (Maeve Dermody), and house servants Thomas Rogers (Noah Taylor) and his wife Ethel (Anna Maxwell Martin). One by one, the guests begin dying under mysterious and rather brutal circumstances until Miss Claythorne realizes that the deaths are related to a children’s nursery rhyme framed on the walls in each of their rooms. Eventually, the strangers realize that there is no actual Mr. Owen; one of the house party is secretly killing each of the guests one by one.

And Then There Were None (whose plot has been lifted , stolen, or borrowed from by countless other writers since its original 1939 release) is one of the books of which Agatha Christie was most proud because in keeping the identity of the murderer hidden while still allowing us to get inside the mind of the killer (along with the minds of each of the victims), she set for herself an almost impossible task, a diabolical puzzle that very few people on first reading (or viewing) ever manage to figure out before the ending is revealed. Even when we get down to two people left, there are still surprises and shocks to come. Screenwriter Sarah Phelps embroiders the backstories of some of the characters so we can see them committing their crimes and living with their guilty secrets, and some of the methods of murder have also been altered from the originals, but the bleak, cheerless tone of foreboding from the novel is present and accounted for in this rendering (the feature films rather make the crimes more of a game and soften their horrific natures with a cunning wit, something that is definitely not done in this version of the story), and the sense of doom and desperation only mounts as we get closer and closer to the inevitable outcome. Director Craig Viveiros has three episodes in which to tell the tale (the feature films are all less than two hours, and while the original broadcast on the BBC was in three installments, the presentation on the Lifetime cable channel on this side of the Pond stretched the running time into two two-hour blocks on successive nights), but to fill the generous time allotments, there are flashbacks galore (one in particular going over the same ground with slight extensions two or three times), a rather pointless drug and drink party on the eve of the final murders, and an overuse of slow motion which does drag the pacing to a decided crawl on occasion.

There isn’t much argument with the casting, however. Old pros like Toby Stephens, Sam Neill, Charles Dance, and Miranda Richardson get deeply within their characters and put on quite a show (Stephens in particular is a mass of hysterical tics and unending chain-smoking). The sexual attraction between Philip Lombard and Vera Claythorne, present in the play and the feature films but not in the original novel, is repeated here but with a somewhat different outcome, and Aidan Turner and Maeve Dermody handle their roles quite nicely. (On several viewings, Maeve Dermody’s performance grows in power and authority). Burn Gorman stays adroitly hot under the collar for most of the story, and Noah Taylor and Anna Maxwell Martin as the servants are an especially creepy pair of domestics. Since he’s the first to die (sorry for the spoiler, but so it has been in every incarnation of the piece), it’s rather easy to forget about the contribution of Douglas Booth’s Anthony Marston, but he’s memorably caddish during his few minutes of screen time.

The program has been framed at its widescreen television aspect ratio of 1.78:1 and is presented in 1080p using the AVC codec. Sharpness is very good to excellent throughout, but because a slight green tint has been applied to the photography for the purpose of unsettling tone, color values are somewhat compromised with flesh tones rather sickly pale. Black levels are acceptable without being reference quality. Each of the three episodes contained on the two Blu-ray discs has been divided into 6 chapters.

The DTS-HD Master Audio 5.1 sound mix is quite sophisticated for a television production though you may find that the rear speakers get much less of an atmospheric workout from the thunder, lightning, gunshots, and wave crashes than the front soundstage does. Dialogue has been professionally recorded and has been placed in the center channel. The ominous music score by Stuart Earl features continual deep bass which will give your subwoofer something to do during much of the program’s running time.

On Agatha Christie (19:53, HD): many members of the cast and crew comment on their familiarity (or lack thereof) with the works of Agatha Christie. Many of the sound bites here are also present in the above featurette.

Sarah Phelps Interview (14:54, HD): the writer discusses her approach to the material and her growing enthusiasm for Agatha Christie. Again, much of this interview was also used in the above featurettes.

Photo Gallery (1:15, HD): a brief montage of behind-the-scenes color photographs of the production.

And Then There Were None, while containing the same basic story found in all four previous feature film versions of Christie’s stage masterwork, truly offers a more authentic experience with the tone and texture of Christie’s original, highly unsettling novel. The Blu-ray release presents superior sound and picture to the broadcast versions and comes highly recommended. 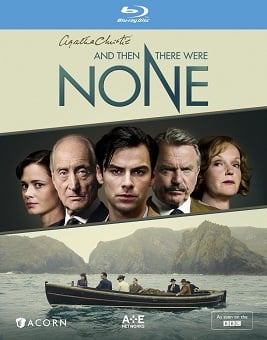