Forum List What's new Dark Style Change width
Log in Register
What's new Search
Menu
Log in
Register
Navigation
Install the app
More options
Dark Style
Close Menu
Posted on November 25, 2020 by Todd Erwin
You are using an out of date browser. It may not display this or other websites correctly.
You should upgrade or use an alternative browser.
Beautiful but lacking humor 4 Stars

In a surprising move, Disney has released the live-action remake of Mulan on physical 4K UHD Blu-ray just four weeks before it debuts (at no extra cost) on Disney+.

Mulan (Yifei Liu) is not your typical Chinese girl, circa 15th century. She is a girl full of energy and “chi,” something forbidden for females to have or demonstrate, and in doing so risk being considered a “witch.” After a close call chasing a chicken on the rooftops of her small village, her parents (Tzi Ma and Rosalind Chao) try to restrain her activities in hopes of a successful match by the village matchmaker. The match becomes a failure when Mulan tries to save her sister (Xana Tang) from a small spider during a tea ceremony. But Böri Khan (Jason Scott Lee) is leading an invasion of China with a band of Rouran warriors with assistance from Xianniang (Li Gong), a shape-shifting “witch” who, deep down, is not all that different from Mulan. The Emperor (Jet Li) sends out a decree, drafting one male from each family to join his army and stop Böri Khan. Having no sons, Mulan’s father accepts the Emperor’s decree, despite his declining health. Fearing her father will die in training, Mulan takes up her father’s sword and armor in the middle of the night, disguising herself as a young man as she arrives at bootcamp under the leadership of Commander Tung (Donnie Yen). If her true identity is discovered, it will bring shame to her family, even though Mulan shows her skills as a warrior and a leader.

This live-action retelling of Mulan, while telling essentially the same story, is very much a departure from the 1998 animated version. Director Niki Caro (Whale Rider) and screenwriters Rick Jaffa & Amanda Silver and Elizabeth Martin & Lauren Hynek have created a more dramatic Chinese war epic, dispatching much of the humor (sorry, no wisecracking dragon voiced by Eddie Murphy) and all of the songs. The battle sequences definitely earn the film its PG-13 rating (the first Disney live-action remake to do so), and the performances are exceptional. While a small talking dragon would have been out of place in this adaptation, it could have used a bit more humor sprinkled here and there. Harry Gregson-Williams has composed a very Chinese-influenced score that occasionally supplies hints of Jerry Goldsmith’s original Mulan theme.

Mulan was captured at 4.5k and 6.5k resolutions on Arri Alexa 65 and LF cameras and completed as a 2k digital intermediate with Dolby Vision high dynamic range for its planned premium theatrical engagements. Disney’s 2160p upscale on this disc only offers HDR10 high dynamic range. As an upscale, this is quite possibly the studio’s best efforts, definitely on par with most of Sony and Warner’s upscaled efforts. There is a very noticeable increase in fine detail over the included Blu-ray edition, bringing out more refined textures in the costumes and armor worn in the film. Colors are more natural and not overly saturated, and blacks are deep allowing for more noticeable texture designs in darker clothing and stronger shadow detail.

The default audio track on Mulan is a very good Dolby Atmos track that is wide and immersive, but does not exactly pack a wallop in terms of LFE, although I would not call it anemic, either. Overheads are often used subtly, such as a bird flying overhead or wind, but also to help move sounds more fluidly from speaker to speaker. Dialogue remains clear and understandable throughout.

All of the extras can be found on the included Blu-ray edition.

Updating a Classic (1080p; 15:16): The cast and crew discuss adapting the original tale and animated feature as a live action film for modern audiences.

Reflections of Mulan (1080p; 3:54): A look at the movie’s score and actress Yifei Liu’s performance of the song Reflections heard over the end credits.

Digital Copy: An insert contains a code to redeem a digital copy (in UHD where available) on Movies Anywhere. The code will also net you 200 points on Disney Movie Insiders rewards program.

I enjoyed this live action adaptation of Mulan, but felt it could have used just a smidge of humor as it played itself a bit too seriously, especially for younger viewers. The movie’s release on physical 4K UHD Blu-ray was certainly a surprise. 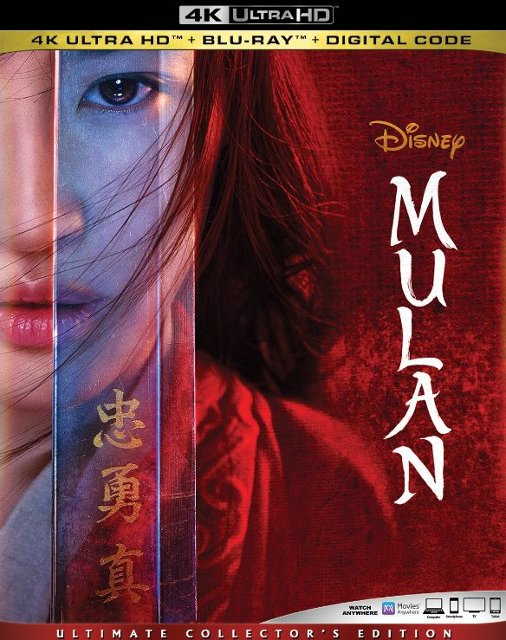