Forum List What's new Dark Style Change width
Log in Register
What's new Search
Menu
Log in
Register
Navigation
Install the app
More options
Dark Style
Close Menu
Posted on April 9, 2019 by Sam Posten
You are using an out of date browser. It may not display this or other websites correctly.
You should upgrade or use an alternative browser.
Anyone who creates traffic like this should be shot! 2.5 Stars 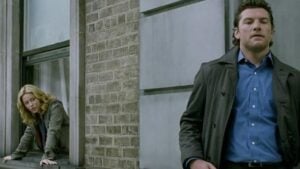 After walking in to the Roosevelt Hotel in NYC, ex-cop Nick Cassidy (Sam Worthington) has an exquisite meal, wipes the room clean of fingerprints, and climbs out the window in an apparent suicide attempt. When confronted by local cop Jack Dougherty (Edward Burns) from inside the room, Cassidy keeps his identity hidden and makes an usual request: He wants only to negotiate with Lydia Mercer (Elizabeth Banks). Mercer made national news the previous month due to a failed attempt at saving another jumper. Tho hung over, Mercer keeps Cassidy talking and soon begins to understand that everything is not as it seems. Cassidy’s past begins to unravel, with ex-partner showing up and a family grudge against an NYC building magnate (Ed Harris) being revealed.

While Worthington puts in an earnest portrayal, the rest of the film is too convoluted to match. The subplot with brother Joey (Jamie Bell) and Girlfriend (Genesis Rodriguez) tries to put a caper in the middle of the story, but this too is left in the dust by productions like the Ocean’s series or even Entrapment. There’s no real drama to the heist and no payoff either. A brief highlight are the two performances of ex partner (Anthony Mackie) and street cop (Titus Welliver), but these are short lived. The premise of the family fued with a New York Building developer (Harris) doesn’t even make any logistical sense, yet it gives Harris a chance to be a bad guy and chew some scenes.

Ultimately, Man on a ledge tries to peel back the layers of it’s story in too direct a set of flips. First it makes the audience think that things will be about Cassidy’s problems, and then rolls it around to say that it’s all a sham front for a different story, and then tries to do another ret-con. It’s a technique that’s done much better in films like Inside Man. In fact, there are a lot of similar qualities between these films and I started thinking of MOAL as “Outside Man”. It never gelled for me and seemed to be too concerned with its influences without ever being concerned about what it really had to say. 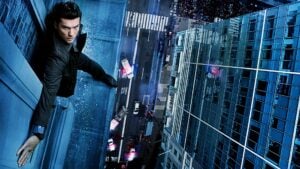 Presented at it’s theatrical ratio of 2.40, Man on a ledge shines with a nice HDR color pass and does well when it is trying to induce vertigo from heights. Unfortunately it’s a 2k uprezz that falls flat in the effect sequences that piece together plate photography to do set extension. I’m sure these looked very convincing at native resolution but some of them took me out of the action on my big screen.

It’s also very grainy throughout and has many scenes with absolutely devastating softness, especially on closeups on faces. 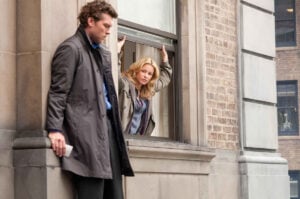 Man on a ledge has a new Atmos track. It doesn’t have a lot of positional height sound but it does nicely render voices and has some good thump and swirling gunfire later in the film. 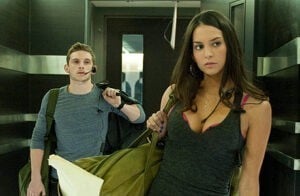 There are exactly two extras here. The first, The Ledge, is a 20 minute look at the practical effects employed to shoot on location in NYC. The use of boom cameras and the creation of fake floor levels atop a real NYC hotel are a tribute to the hard work that went into this film. There’s also a look at the CGI used to do background extension and crowds on the streets. Well worth your time.

Unfortunately the second extra is one of the worst of all time. In it, Elizabeth Banks gives a solo commentary over top of the original trailer. She somehow manages to be boring and creepy while attempting to make it sound sexy. It’s almost worth your time just to see how bad it is. Strangely there is no way to watch the trailer -without- this wacky commentary! 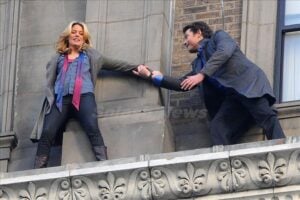 Overall Man on a Ledge did not work for me, and looking over the scores at a few other sites it seems I was not alone in this assessment. It’s not a bad film, it just doesn’t really stand up when compared to similar ones, and the excellent cast doesn’t elevate it either.

There is good news tho! As of right now Amazon has this for the bargain price of $13, so you can’t go wrong giving it a chance! 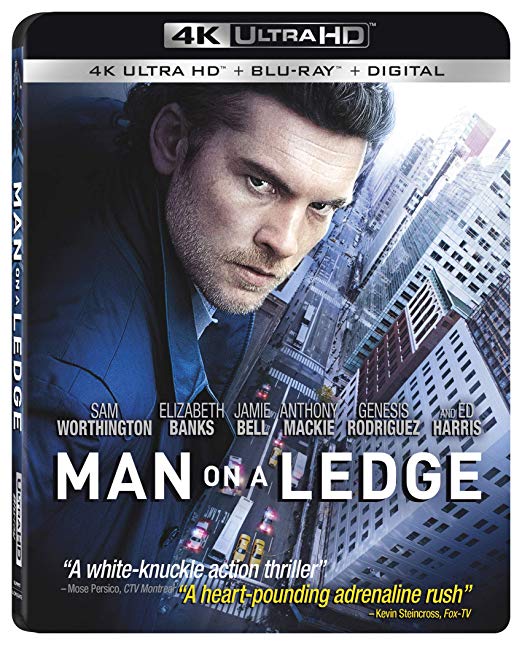