Forum List What's new Dark Style Change width
Log in Register
What's new Search
Menu
Log in
Register
Navigation
Install the app
More options
Dark Style
Close Menu
Posted on March 16, 2019 by Sam Posten
You are using an out of date browser. It may not display this or other websites correctly.
You should upgrade or use an alternative browser.
Never go to war, especially with yourself. 4 Stars

Through a chance encounter with superior firepower, immigrant Yuri Orlov (Nicholas Cage) becomes entwined in international arms sales. Building his empire by starting at the bottom, he recruits his brother Vitaly (Jared Leto) and leverages his family’s connections. Through drunken uncle Dmitri (Evgeniy Lazarev) he gains access to the leftovers of the Russian empire’s breakup, and crosses path with much more savvy arms dealers like Simeon Weisz (Ian Holm). But it’s his deals with dictator Andre Baptiste (Eamonn Walker) that tries Yuri’s conscience and burns bridges in his life, including his relationship with his wife Eva Fontaine (Bridget Moynahan). Pursued by the Feds, led by Jack Valentine (Ethan Hawke), it’s only time before everything will crumble. 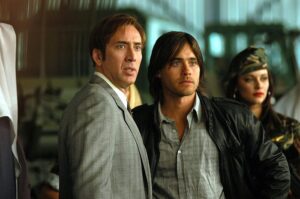 Cage turns in a epic, almost Shakespearean, performance as Yuri, and carries the film as a man defined by his vision to the bitter, tragic ends. And then Yuri somehow manages to carry on despite losing everything, consumed by the one thing he thinks he is good at. Set matter of factly as a warning regarding the vast numbers of small and light arms that are in use and cached around the world, Lord of War effectively shows how small players get caught up in geopolitical conflicts that are usually only seen as sound bites on the evening news. By humanizing the slaughter that the Baptiste’s perpetuated in plain view of the Orlovs, viewers get to see the specific bloody carnage of individuals whose deaths are usually counted as mere statistics. 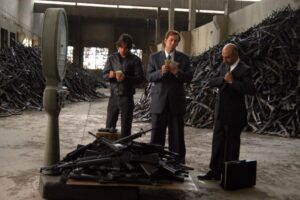 I’ve seen Lord of War years ago either on DVD or Bluray and was struck by the opening sequence that tracks the life of a bullet, from it’s manufacture and packaging through to the shocking piercing of an individual child. I don’t remember thinking it was a beautifully shot film but I do now, as this UHD effectively uses light and darkness to evoke emotion and power during the tragic rise and fall of the Orlovs. This 4K UHD features a Dolby Vision encode which I sampled via LG OLED but I watched the feature in whole on 120′ 4K HDR via 120″ projection. Both are deeply effective in highlighting details in dusty 3rd world countries and rich Manhattan apartment buildings alike. There is subtle film grain throughout as befitting the film stocks used, but no other artifacts or ringing are present at all. It’s got a grounded look, neither overly colorful or calling attention to highlights, with sparing use of HDR to accentuate where necessary, particularly in explosion sequences. 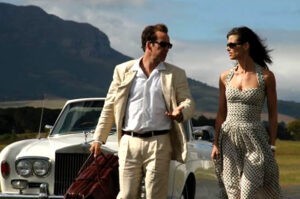 I also don’t remember Lord of War sounding nearly this great. The move to an Atmos Soundtrack is a highlight of this disk and very welcome. Throughout the film many gunshots and explosions occur, and they swirl mightily to all corners and above the listener via this soundtrack. The pops are meaty and memorable for what is technically a character driven tragedy. 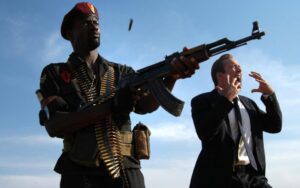 Lord of War has a solid collection of extras, and each is lengthy enough to not feel like they were phoned in.

Leading off there is a feature length commentary with writer/director Andre Niccol. I sampled portions of this and recommend it for insights into his thinking on the small arms availability that he wants to bring attention to.

There’s a half dozen deleted scenes that were rightly excised.

“Making The Lord of War” interviews cast and crew about the making of the film and also focuses on the message of arms dealers and the deadliness of small arms.

Lord of War is effective primarily as a character study wrapped in a tragedy, led by terrific performances by all involved, led by Cage, Leto and Hawke. That it is founded on real life people and the explosion of small arms throughout the world makes its underlying message even more effective. This disk is the whole package, with solid extras, picture quality and booming Atmos sound. If you haven’t seen it or it’s been since the original release it is worthy of a rewatch for sure. 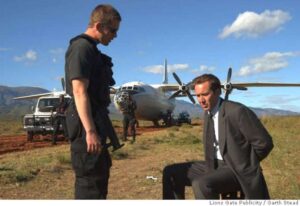 For information about the real person who inspired Lord of War, read up on Viktor Bout:
Viktor Bout 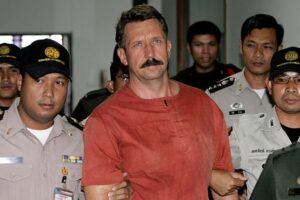 My gut says this is the same transfer used for the ancient BD but it looks better due to the format and improved compression techniques...

It’s possible @Colin Jacobson , I don’t have others to compare it too. Like I said there’s only a few scenes where to HDR shines through and even that can be layered on an older or even lower res transfer. If you are considering an upgrade situation I’d put more focus on new Atmos sound.

Sam Posten said:
It’s possible @Colin Jacobson , I don’t have others to compare it too.
Click to expand...

Uh, yeah you do - the Blu-ray comes in the same package!

Colin Jacobson said:
Uh, yeah you do - the Blu-ray comes in the same package!
Click to expand...

That's the same old transfer? Again I have no older versions to check against and generally I do not watch the legacy versions packed in during reviews.

Sam Posten said:
That's the same old transfer? Again I have no older versions to check against and generally I do not watch the legacy versions packed in during reviews.
Click to expand...

Yes, it's the same Blu-ray from 2006. Lionsgate doesn't tend to produce new BDs when they do 4K upgrades...

Colin Jacobson said:
My gut says this is the same transfer used for the ancient BD but it looks better due to the format and improved compression techniques...
Click to expand...

They’re both almost certInly taken from the DI, with the UHD being uprezzed.

I might buy this or the 4K digital if it's made available on iTunes. I never upgraded from my DVD.
You must log in or register to reply here. 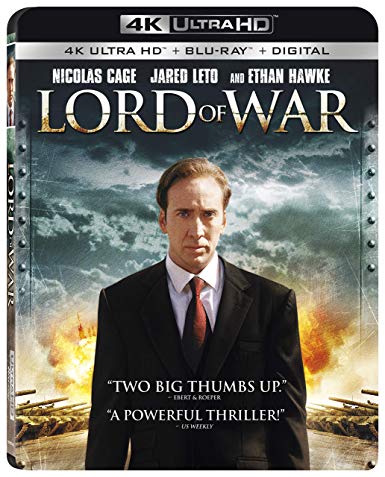