With the vast majority of silent films no longer existent due to the ravages of time, faulty studio preservation techniques, or plain neglect, it’s something of a miracle that we have 1918’s Little Orphant Annie directed by Colin Campbell available for viewing.

With the vast majority of silent films no longer existent due to the ravages of time, faulty studio preservation techniques, or plain neglect, it’s something of a miracle that we have 1918’s Little Orphant Annie directed by Colin Campbell available for viewing. Resurrected almost from the dead by film preservationist Eric Grayson from five variably lacking sets of materials available to him, this early performance of silent film great Colleen Moore playing a character immortalized by poet James Whitcomb Riley is once again available for viewing. The film reveals itself as an imaginative and technically advanced mixture of comedy, drama, and fantasy, and it’s a relief to know that early cinematic craftsmanship like this has not been lost to us.

When her mother (Mae Gaston) dies before her eyes, young Annie (Jean Stone as a little girl; Colleen Moore as a pre-teen) is left an orphan and brought to a local orphanage where her ability to spin fantasy tales mesmerizes all of the other orphan children. When she ages out of the orphanage’s regulations, her wicked Uncle Tomps (Harry Lonsdale) is sent for to take charge of the young lady. He and his equally cruel wife Elizabeth (Lillian Hayward) are outwardly abusive to the girl making her no more than a slave on their farm, but kindly neighbor Dave Johnson (Tom Santschi) comes to Annie’s rescue and sees to it that Squire Goode (Lafe McKee) and his wife (Eugenie Besserer) take in the waif to assist them in tending to their own eight children. Annie is wonderful with her charges, but she’s upset when Dave volunteers to serve in World War I taking away her knight in shining armor with no assurance that he will ever return.

The film’s scenario has been culled from two of James Whitcomb Riley’s narrative dialect poems “Where Is Mary-Alice Smith?” and “Little Orphant Annie” along with some inventions like a budding (but very chaste) love interest for the adolescent Annie. The story of a poor orphan mistreated by one family and adored by another certainly wasn’t a particularly new kind of story at the time, but the film’s real worth is in its fantasy sequences (tinted blue throughout the film’s not quite one hour running time; all of the various tints have been retained here to great effect) which contained some amazing special effects for its day using double exposures, miniatures, split screen effects, and trucking shots to a much more sophisticated degree than were prevalent at the time (a sequence where a gaggle of witches swoop down from on high on their brooms and kidnap a recalcitrant boy is pretty astonishing). Director Colin Campbell doesn’t seem to allow his actors to overdo their pantomime, so the evil Tomps and Elizabeth are savage without being a male and female Simon Legree, and the stalwart Dave Johnson is resolute without lots of flailing gestures and chest pounding. In fact, Colleen Moore is the most over-expressive of the actors throwing herself on the ground a couple of times in despair over her harsh treatment or a bit of bad news.

In one of her earliest starring roles, however, Colleen Moore is still able to display attributes that would eventually lead to her being one of silent cinema’s most highly paid actresses ($12,500 a week at her zenith): winsome innocence, sparkling and expressive eyes, and even, appealing features. While overaged for his role (which should have gone to an actor barely twenty), Tom Santschi is still a stalwart and upstanding Dave Johnson while you won’t find two more kindly and beneficent parental types than Eugenie Besserer and Lafe McKee as the Goodes. On the opposite side of the coin, Lillian Hayward and Harry Lonsdale are appropriately malevolent and heartless as Annie’s aunt and uncle. James Whitcomb Riley appears as himself in the bookends of the film narrating the story of Annie to a group of adoring children.

The film is framed at 1.37:1 and is presented in 1080p using the AVC codec. Culled from five different sources which included materials on video, 16mm, and 35mm (the sequence used from 35mm is readily identifiable with its crisper, more detailed appearance), the transfer is as good as we’re likely ever going to get with this title. There is the damage, scratches, judder, and variable densities that one would expect from a film that is a century old, and sharpness and softness ping-pong back and forth as they must due to whichever element is being used for a particular shot, but it’s all acceptable knowing how close the movie came to not being saved at all. The movie has been divided into 7 chapters.

The Dolby Digital 2.0 stereo piano track has been composed by Ben Model, and it sounds sharp and clear throughout.

Audio Commentaries: Colleen Moore biographer Jeff Codori offers intermittent anecdotes on the actress in between making comments on the narrative as it plays. More background on Moore, particularly her later career, would have been welcome. The second track features restorationist Eric Grayson and historian Glory-June Greiff commenting on the restoration work and the literary sources used for the scenario. It’s unquestionably the better of the two tracks.

Eric Grayson Interview (4:45, HD): recorded at the premiere of the new restoration, Grayson describes his travails in accomplishing the restoration of this movie and thanks Kickstarter contributors for providing funds for the work.

Sixteen-Page Booklet: contains vintage stills, posters, and slides from the movie, notes on the restoration by Eric Grayson, and an essay on the film and its antecedents by Jeff Codori.

Little Orphant Annie is a silent film milestone and one that is now thankfully rescued from oblivion thanks to the tireless efforts of Eric Grayson. The age of its elements is obvious, and it’s clearly a product of its time, but its charm and its remarkable technical execution make it timeless and a great addition to film culture. Recommended!

Are there screen caps on this?

I bought this from Grayson's own hands and have met and chatted with Ben Model and his wife. Matt, you'll appreciate this. Ben's wife, Mana (sp?), was in the original B'way cast of Merrily We Roll Along, which means I saw her in it, so she and I chatted about being Sondheim groupies.
Reactions: JoeDoakes and Matt Hough

I've see Ben Model accompanying films in person before and it's always a treat. He had some particularly funny improvisations at one show where the film ripped.
Reactions: Matt Hough

It's good to see another one of Colleen Moore's films saved. I recently saw Why Be Good? and I was blown away by her. 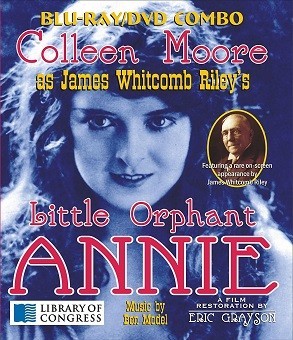