Aching, bittersweet view of childhood is a keeper. 3.5 Stars

A story of damaged children, their fears and foes, their friends and families: that’s Claude Barras’ My Life as a Zucchini, one of the more delicately handled and bittersweet animated films of this or any other year.

A story of damaged children, their fears and foes, their friends and families: that’s Claude Barras’ My Life as a Zucchini, one of the more delicately handled and bittersweet animated films of this or any other year. Whether experienced in the original French or in an exceptionally well-crafted English language dub, My Life as a Zucchini will win your heart with its memorable characters and deftly created stop motion animation.

After the accidental death of his alcoholic mother (Natacha Koutchoumov in French, Susanne Blakeslee in English), Icare (Gaspard Schlatter in French, Erick Abbate in English), who prefers to be called by his mother’s sarcastic nickname for him “Zucchini,” is taken by kindly policeman Raymond (Michel Vuillermoz, Nick Offerman) to an orphanage run by Ms. Patterson (Monica Budde, Susanne Blakeslee). There he meets other children damaged by abusive upbringings: resident bully Simon (Paulin Jaccoud, Romy Beckman), sweet Bea (Lou Wick, Olivia Bucknor) who’s longing for her mother to return, bed wetter Ahmed (Raul Ribera, Barry Mitchell), painfully shy Georgie (Elliot Sanchez, Finn Robbins), and, eventually, the girl of his dreams Camille (Sixtine Murat, Ness Krell). The two are inseparable, but there’s always the danger of Camille’s greedy, bullying Aunt Ida (Brigitte Rosset, Amy Sedaris) who will come into big bucks if she can be named Camille’s guardian. Orphanage teachers Mr. Paul (Adrien Barazzone, Will Forte) and his pregnant wife Rosy (Véronique Montel, Ellen Page) are going to do everything in their power to prevent Camille from being taken away, but sometimes the legal system gets in the way of personal feelings and what’s right.

Based on the book Autobiographie d’une Courgette by Gilles Paris, the film’s screenplay by Céline Sciamma does a marvelous job exploring very delicately the wonders, fears, and joys of childhood. We see children struggling with accepting their sad lot in life and supervising adults who are doing all in their power to assure the children they’re loved and appreciated. The film celebrates differences and eccentricities which makes it right off the bat something unique to be treasured, and the PG-13 rating is earned with the children’s frank discussions of sexual matters (where babies come from) and a sprinkling of profanity. Sequences such as an outing at a carnival with a terrific sequence (though too brief) of a ride through a haunted house or an extended outing with the kids at a snow resort where sleighing, snowman building, and snowball fights mark the essence of childhood joy are marvels of stop motion animation. And, yet, all of the human emotions of the children and adults are captured wonderfully as well with one-of-a-kind policeman Raymond especially endearing himself to all with his good-natured acceptance as the target of water balloons and his genuinely developing love for Zucchini and Camille. There won’t be a dry eye in the house as tough-on-the-outside Simon, who has actually saved the day in a most clever way, crumbles at the thoughts of losing parts of his beloved orphanage family as the film nears its conclusion.

Director Claude Barras has hired nonprofessional children to play the younger roles in French, and while their American professional counterparts may have a touch more expression with their lines, the story remains affecting whether watched in French or English. Among the adult actors, Nick Offerman’s English version of Raymond contains just a bit more heart than Frenchman Michel Vuillermoz’s take on the role, but Brigitte Rosset comes out as the more menacing Aunt Ida in comparison to Amy Sedaris’ louder but less dangerous version of the character.

The film’s theatrical 1.85:1 aspect ratio is faithfully rendered in this 1080p transfer using the AVC codec. Sharpness is so good that it allows us great opportunities to study the intricacies of the stop motion animated designs for the puppet characters (the children, several sporting scars from their brutally abusive upbringings, are haunting the more time we spend with them). Color is wonderfully contained, brilliantly bright at times and subdued appropriately at other times, and black levels are first-rate. Contrast has also been masterfully applied for a consistent visual atmosphere, and there is no banding on display to disrupt the proceedings. For those who watch in French, the white English subtitles are very easy to read. The movie has been divided into 14 chapters.

The DTS-HD Master Audio 5.1 sound mix is available in both original French and English dubbed incarnations. Each is quietly effective without ever drawing attention to itself. The guitar-laced background score of Sophie Hunger (along with a pop tune or two) gets a nice spread in the soundfield, but atmospheric effects seem more directed to the front soundstage. Dialogue has been well recorded and has been placed in the center channel.

The Making of My Life as a Zucchini (18:18, HD): director Claude Barras, chief animator Kim Keukeleire, and other members of the crew go through the process of the production noting how the puppets were designed and created, how the arduous animation was structured in shifts, and the casting of the voice actors and working with them together to get a more realistic feel for the action in the story.

The Genie in a Tin of Ravioli (7:43, HD): director Claude Barras’ short animated film of a man granted two wishes by a genie trapped in a can of ravioli.

Theatrical Trailer (1:45, HD): the English language version of the trailer.

Promo Trailers (HD): April and the Extraordinary World, Phantom Boy, When Marie Was There.

An unusual and vividly poignant view of misfit childhoods aching for love, My Life as a Zucchini earned acclaim at the Cannes Film Festival and an Oscar nomination this past year as Best Animated Feature. The Blu-ray offers a handsome package of the film with a couple of worthwhile supplements and is certainly recommended. 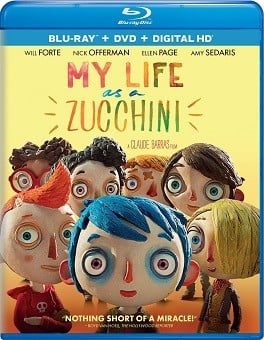