Posted on June 10, 2016 by Matt Hough
Coarse comedy comes to an end after seven seasons 3 Stars

After six previous seasons on the air, FXX’s The League enters its final quarter with another thirteen wildly erratic but only occasionally funny outings.

After six previous seasons on the air, FXX’s The League enters its final quarter with another thirteen wildly erratic but only occasionally funny outings. Not having reviewed the show since season two, the program has made no different strides in the years since then, presenting the shenanigans of five high school friends now long out of school (though with their blundering stupidity and boneheaded decision-making you might imagine they’re still in grade school) who taunt, tease, bicker, and torment one another during a season of fantasy football. Yes, they have their own league, and yes, the competition seems to matter to them, but most of the thirteen episodes that make up the second season of this show don’t revolve around football or their squads. Instead, the cast is thrown into various situations where their interactions can produce optimum levels of vulgar, fratboy humor and utter nonsense. Buddy comedies can be fun or foolish, depending on the genuine caring for one another that exists under the surface of their outward boisterous camaraderie, but these five guys seem especially insensitive and cruel to one another. Friends like these most of us can do without. On the other hand, some of the improvisatory comedy can be amusing, even witty at times, and this gives the show its only reason for existing.

We have to accept that these five very diverse guys would actually be friends with one another in any kind of actual real world scenario. Ruxin (Nick Kroll) and Kevin (Stephen Rannazzisi) are lawyers. Andre (Paul Scheer) is a plastic surgeon, allegedly the best in Chicago though we have only mishaps with patients to use as a measuring stick. Taco (Jon Lajoie) is a stoner/songwriter/entrepreneur who actually has a ridiculously amusing Amazon-style satirical business model and a B&B going on until he burns it down. Pete (Mark Duplass) spends the season polishing up his skills as a sports referee (basketball and girls soccer seem to be his specialties), an activity that takes him away from BFF Kevin and leads to the season’s best episode “Trophy Kevin” in which Pete trades in Kevin for a younger, fresher BFF model. Ruxin and Kevin both have happy if volatile marriages: Ruxin’s wife (Nadine Velazquez) is more of a trophy the average-looking lawyer likes to show off (though some late season plot turns with her take the series to its most tasteless episode “Adios y Bienvenidos.” Kevin’s wife (Katie Aselton), having established her credentials during season two as an excellent league player, is now a regular part of the fantasy league. Andre is the group’s patsy, the moronic innocent who’s always the butt of their jokes, but his affair with Pete’s ex-wife Meegan (Leslie Bibb) furnishes several of the episodes with their narrative firepower.

Since the series is an FXX program, raunchiness and vulgarity are the show’s major calling cards. There are plenty of gay-baiting, genital, and scatological jokes spread over the course of these thirteen episodes, and the director loves to set up situations where the guys are forced to interact with one another’s junk or where one or more of the guys is placed in an embarrassing situation involving some kind of bodily function. The season’s best episodes, however, all revolve around the innocently vague Taco. From bringing a Porta-potty into Kevin’s home for his regular use to his moonlighting as a shill for a local bank in a stuffed creature outfit, Taco steals most of the scenes in which he participates.

It’s all very broad with lots of profanity (some of the language must be bleeped for broadcast and is bleeped on the discs, too, but not always) and nudity (which is always pixilated). This is not The Mary Tyler Moore Show, but for FXX’s primarily male audience, it has been a consistently popular if mostly forgettable half hour. The actors certainly play with ease around one another, but like many shows that live or die on the talent of their improvisational actors, the episodes are wildly erratic in quality, and often one good idea in a show can be surrounded by lots of terrible or flat stabs at finding something amusing to riff on for minutes at a time. The shows do continuously feature rapid fire dialogue delivered with exceptional verbal agility even when the words are hateful or demeaning. None of these episodes measure up to the best that network or pay cable comedy shows can offer, but its wildness and anything goes attitude will draw it a certain number of fans. Sports fans will enjoy the occasional cameos by actual NFL players while others may enjoy fleeting guest appearances by Rob Riggle, Christopher MacDonald, Rob Huebel, Will Forte, Charlie Carver, Casey Wilson, Seth Rogan (in an extended animated section of episode #11), Larry David, and Jason Mantzoukas who recurs during the season as Ruxin’s outlandish brother-in-law.

The following are the thirteen episodes contained on two DVDs in the season seven set:

2 – The Draft of Innocence

8 – The Last Temptation of Andre

The program’s original widescreen television aspect ratio of 1.78:1 is faithfully rendered in these transfers which are anamorphically enhanced for widescreen televisions. The shows are solid with pleasing sharpness and only an occasional less-than-perfect focus on the actors at certain times. Color stability is excellently maintained, and flesh tones are very natural. Each episode has been divided into 5 chapters.

The Dolby Digital 5.1 sound mix places all of the well-recorded dialogue into the center channel. The front and rear surrounds present the background music and occasional atmospheric effects with decent fidelity but are admittedly subdued favoring the dialogue of this very talky comedy.

Deleted Scenes (8:12): eleven scenes scattered over both discs which may be played individually or in montage.

Alt Nation (14:10): a montage of sequences which demonstrate the copious amounts of improvisation and ad-libbing that go on during the course of filming.

Taco Tones: three brief vignettes which feature music during the season – Taco Making Tacos (0:53), Down by Lakeshore Drive (1:38), the climactic Pete’s Your Papa (0:48).

Certainly not a great comedy, The League has moments of inspired fun and general nuttiness contained amid a surfeit of juvenile raunch and sometimes inane ramblings. Seven seasons is a great run for any series, and on the basis of the episodes offered here during its final season, it was certainly time for The League to blow the final whistle. 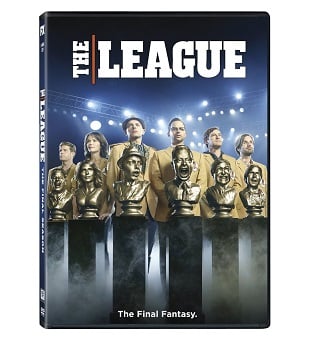