No clearer evidence exists as to the desperate state of American film comedy than with Sam Milman and Peter Vass’ Laid in America. With an almost total lack of invention in plotting, casting, and direction, the film drags on for almost ninety excruciating minutes, its few limp jokes dying from a lack of nourishment and company.

No clearer evidence exists as to the desperate state of American film comedy than with Sam Milman and Peter Vass’ Laid in America. With an almost total lack of invention in plotting, casting, and direction, the film drags on for almost ninety excruciating minutes, its few limp jokes dying from a lack of nourishment and company. The production may have had a low budget, but there is a professional sheen to the enterprise despite its many lapses, one of the few positive attributes the movie can proclaim.

Foreign exchange high school students Duncan (KSI) and Jack (Caspar Lee) don’t want to leave America while still virgins and plan to take advantage of BMOC Tucker’s (Josh Leyva) end-of-school party to do something about their predicament. But Tucker doesn’t like either of the foreigners and demands that they each bring a hot date to be allowed entrance to his party. Not knowing any hot girls, the lads embark on a night of frenzied searching leading them into dangerous escapades with small-time hood Goose (Bobby Lee) and his dimwit girl friend Amber (Angela Trimbur) as well as a malevolent trip to an S&M sex palace run by King Pleasure (Daved Wilkins). With both criminals and the police after them, it seems Duncan and Jack’s final night in the U.S. may indeed be memorable but for all of the wrong reasons.

Directors Sam Milman and Peter Vass have written a screenplay completely lacking in originality (two teens wanting to lose their virginity? What teen sex comedy hasn’t used that as its jumping off point?) taking reasonably interesting leading characters (one sweet South African, one rambunctious Londoner) and subjecting them to an After Hours-style night of unpredictable mess and mayhem where anything can and does happen. The problem is that not one person in the film rings really true as a person, all cartoonish flea brains who would have trouble figuring out how to breathe if it wasn’t an automatic bodily function. In these days where the internet opens the doors to information of all kinds, the two boys’ naiveté and gullibility just isn’t endurable or defensible, and all the ad-libbing in the world isn’t going to make the film viable for any of the characters. There is one wonderful sight gag: a dish of cocaine that flies unpredictably into the face of the innocent Jack, but, of course, the humor never builds in today’s comedies: raunch, profanity, and crudeness must suffice, and the movie is so filled with desperate attempts at humor (a music teacher crawls on her desk like a cat, a profanity-spewing principal plays a scatological video game in front of the boys, a variation on an Uber called a Boober with, you guessed it, two hoochie mommas in Hooters-styled t-shirts as ride along escorts) that one almost feels sorry for the performers attempting to be funny with such lacking material.

YouTube stars KSI and Caspar Lee try their hardest to play these high school seniors (one suspects they’re well beyond high school years), and they don’t embarrass themselves: they can deliver lines believably and manipulate props with ease while staying in character. The school’s jerk quarterback Tucker allows Josh Leyva (also well beyond high school years) to perform with surety despite the stereotypical character. His ex-girl friend and Jack’s big crush Kaylee is played by Madison Iseman, a fresh enough performance with the tepid, unoriginal material. Bobby Lee’s I.Q.-starved gangster Goose seems an almost completely improvised performance, silly and completely non-threatening though the movie might have been more entertaining if there had been some tension in the scenes where the boys are kidnapped by him and his crew (girl friend Amber and Goose’s smothering mother). Angela Trimbur’s Amber is loud and unappealingly over-the-top.

The movie has been framed at 2.44:1 and is presented in 1080p using the AVC codec. Despite the narrative lapses throughout, the movie looks expensive and professional with credit likely due to expert cinematographer Akis Konstantakopolos. Sharpness is excellent with good details in close-ups, and hues are solid where primary colors like reds and purples really pop. Skin tones seem very natural. Black levels are excellent, and contrast has been consistently applied. The film has been divided into 20 chapters.

The DTS-HD Master Audio 5.1 sound mix uses music as the major component of the surround speaker array. Dialogue has been well recorded and has been placed in the center channel. Ambient sounds don’t always get a respectable spread through the fronts and rears but seem more concentrated in the front soundstage.

The Making of Laid in America (58:24, HD): a behind-the-scenes look at all sixteen days of shooting on the movie with producer Max Gottlieb and writer-directors Sam Milman and Peter Vass serving as guides to describe which scenes were filmed on each of the shooting days. Everyone is full of praise for fellow cast and crew members with actors KSI, Caspar Lee, Bobby Lee, Angela Trimbur, Madison Iseman, and Josh Leyva among those who lavish praise on all participants.

Fans of YouTube personalities KSI and Caspar Lee will likely be the ones most eager to see their favorites in Laid in America, a feeble and rather unfortunately lacking comedy. At least they’ll be rewarded with a very professional production and with expert audio and video quality on the Blu-ray disc to give some measure of reason for the existence of this pitiful excuse for 21st century humor. 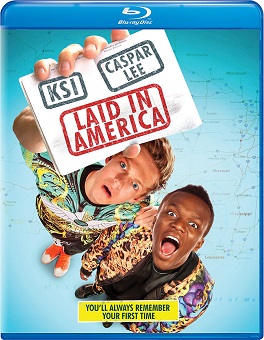