Some of you may not have heard that beloved speaker manufacturer Klipsch is now in the headphone game, releasing the Heritage HP-3 headphones in December. The HP-3 is an interesting product, because unlike many Klipsch speakers that cater to the budget or mid-market audience, the HP-3 is in their Heritage family, and decidedly targeted at the top tier of the headphone market with an MSRP of $1199. This is not an uncommon price point in the world of high end headphones, but all too often, headphone manufacturers choose not to invest in the construction materials and quality components that justify this price.

Klipsch has done the opposite. Starting from the bottom, they have designed the HP-3 from scratch to use only premium materials, premium transducers and premium packaging. When the HP-3 arrived at my house, I was immediately struck by how well packaged it was. In all my years of reviewing audio gear, I have never received a product whose packaging exhibits such attention to detail. So, let’s dig in shall we? 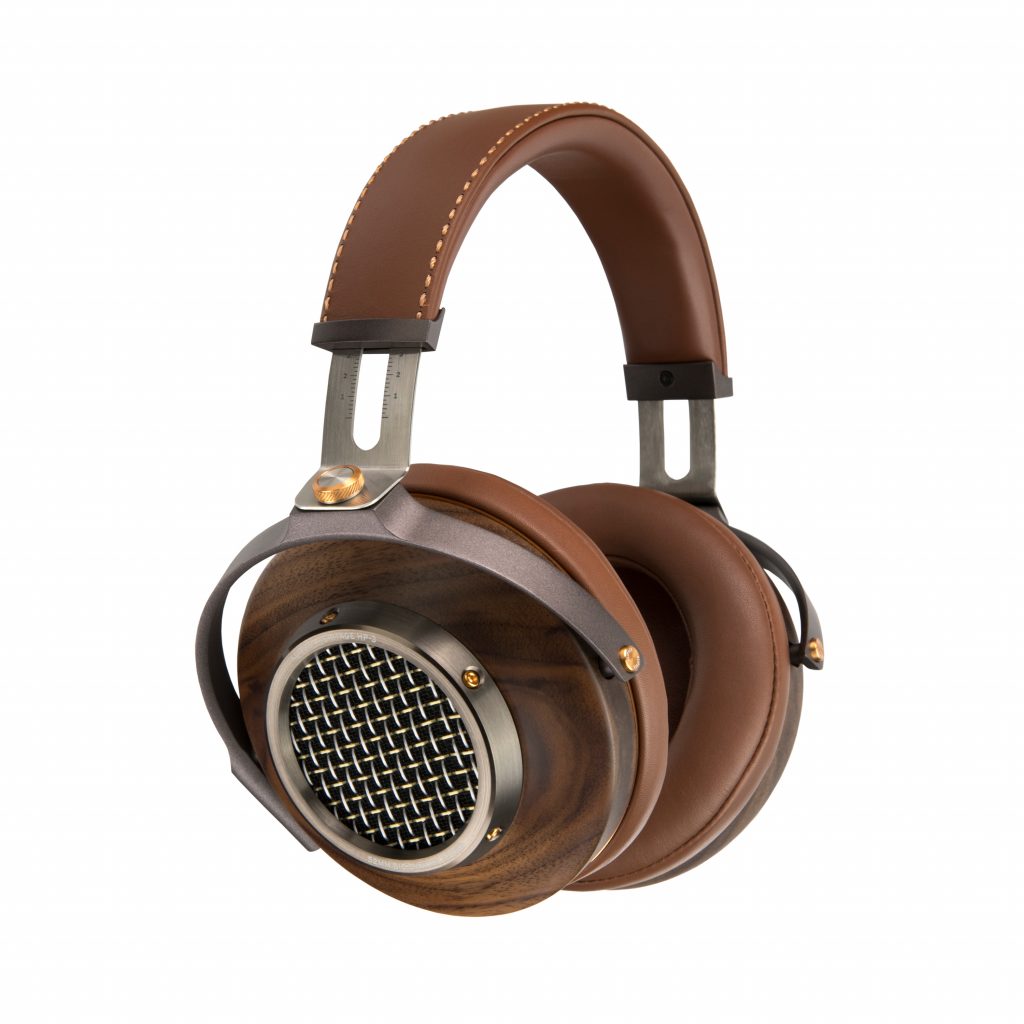 Klipsch is a trusted name in audio, a brand with the sort of street cred and fanatical support others only dream of. Enthusiasts the world over depend on Klipsch in their home theaters, so when the vaunted speaker manufacturer announced a forthcoming headphone, I was intrigued. First, because Klipsch is large enough to have the funds to do real R&D on a headphone, rather than rush another half-baked product to market because everyone else is doing so. And second, because Klipsch decided not to release a mid-market compromise, but a true high end headphone, an area of the headphone market that really needs more competition and innovation.

It’s certainly a sign of the times that almost every large scale speaker manufacturer now also produces headphones, including Paradigm, KEF, and Focal. Personal audio is where HiFi has been headed for a long time, and companies are now taking note that this is a window of opportunity they cannot afford to miss.

So how did Klipsch approach designing the HP-3? For a start, they hired good people like Steve Jain (unfortunately no longer with Klipsch) who are passionate about designing a good product, and gave them free reign to do it right. This meant that Steve and his team were able to try a large variety of materials and settle on a design they approved of, customizing everything from the cups, to the headband to the transducers themselves. 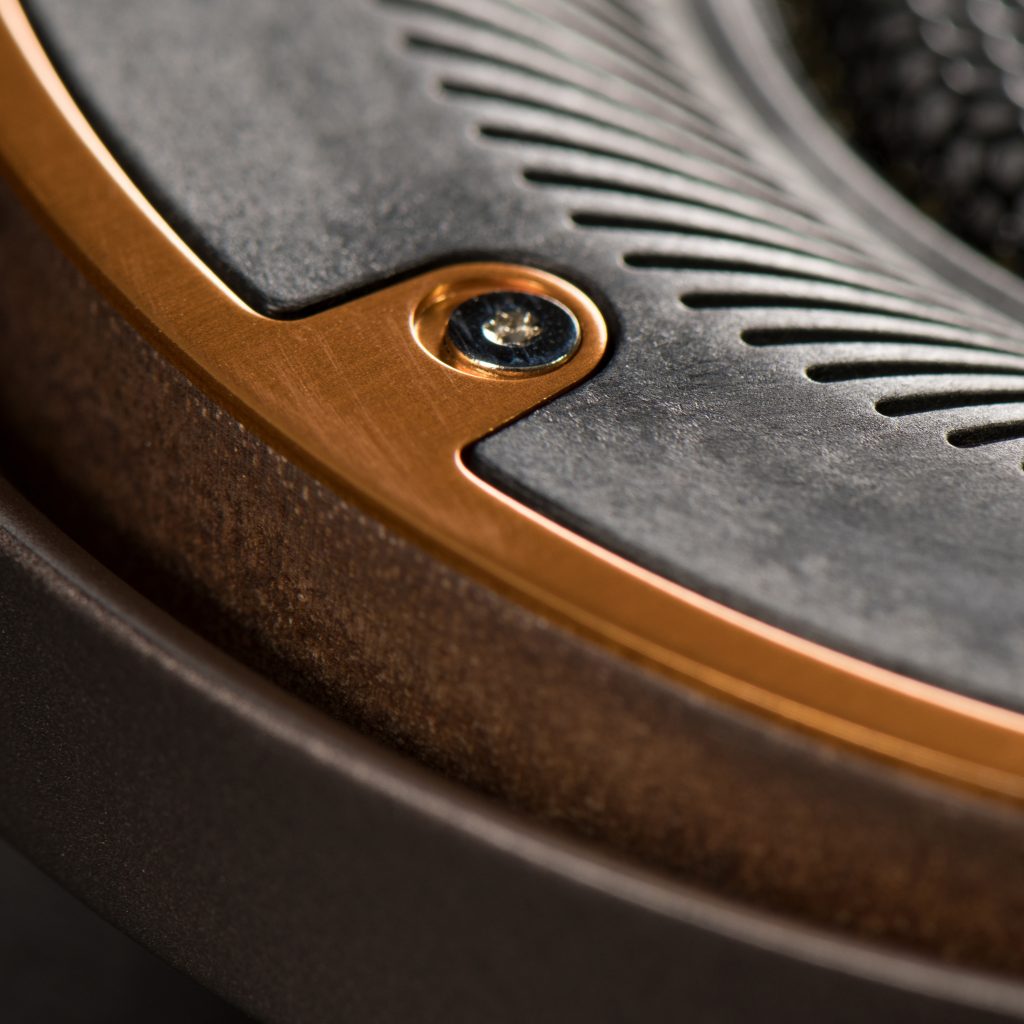 The team at Klipsch settled on a semi-open design, a hybrid between the more common open-back headphone seen in the high end, and the closed-back headphones more commonly used by DJ’s and those who like more bass output. They accomplished this semi-open design with a solid wood triple-vented earcup. After trying a variety of transducers, Klipsch selected a 52mm hybrid biocellulose/inorganic fiber driver. The HP-3 features a genuine cowhide headband, and sheepskin earpads for comfort and breathability. The headband itself is solid steel and features precise markings to adjust the size of the headphones. The assembly of the HP-3 is done by hand using brass hardware, before they are placed into a solid wood retail box, that also includes a solid metal stand, something no other high end headphone I’ve purchased has thought to include. The included headphone cable for the HP-3 inserts into each cup using a standard mini-TRS connector, though the quality of the cable doesn’t quite measure up to the impeccable quality of the rest of the headphone. 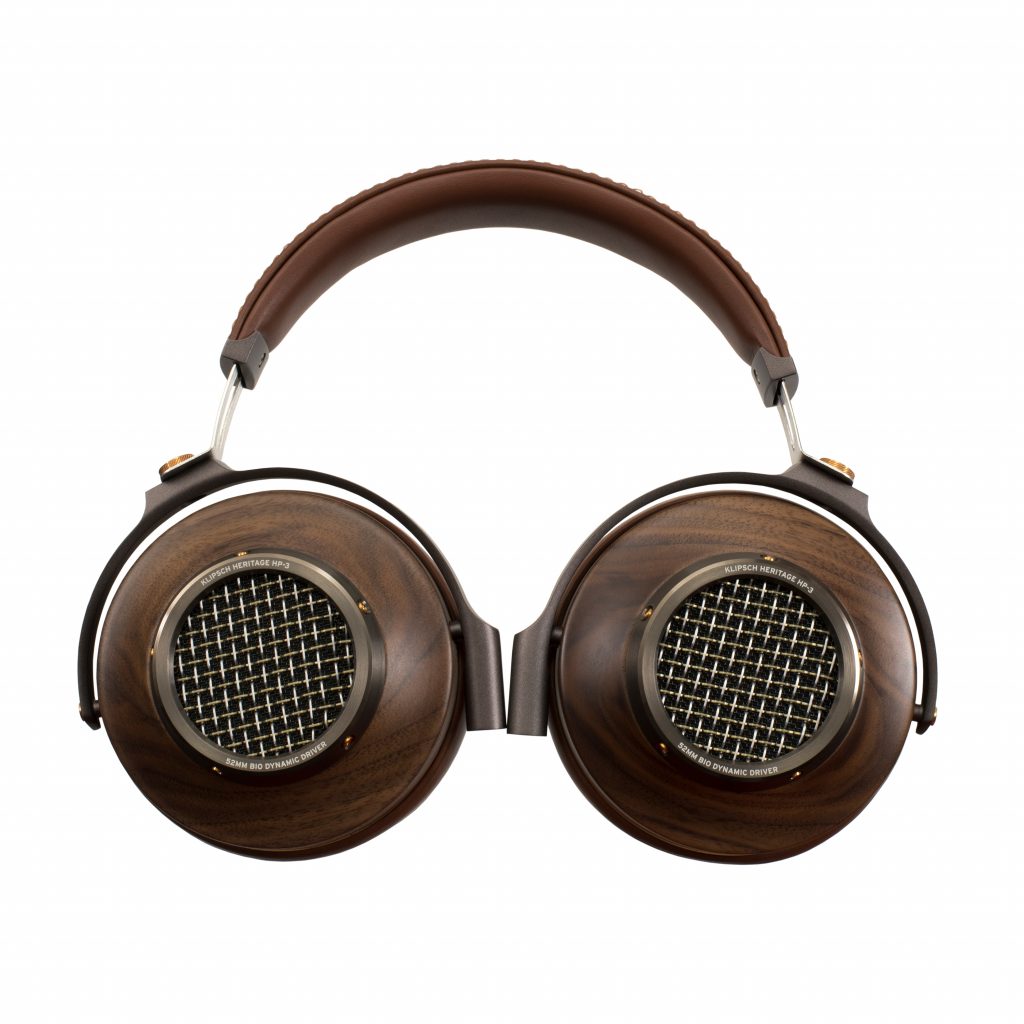 Listening To The HP-3

For those who don’t know, I’m a massive audiophile, and headphones are a huge part of my hobby. My gear collection for headphones includes multiple pairs of high end cans including Sennheiser HD-800’s, HiFiMan HE-1000’s, and Sennheiser HD-650’s. Most of my headphones are modded or tweaked using home-brew methods to improve performance. I also own a nice tube amplifier for my headphones, the Moon Audio Inspire IHA-1, and feed that amp with a variety of very nice DACs. The reason I explain all this is to say that I’m no stranger to the market that Klipsch is targeting with the HP-3, in fact I’m probably right in their target demographic.

Evaluating the HP-3 was pretty straightforward, as I already had the gear in place to just plug them in and go to town.

The first thing I noticed upon listening to the HP-3 was their prodigious bass output. In the headphone world this sound signature is referred to as V-shaped, as if one was to plot their frequency response, there would be an emphasis on the top and bottom octaves.

All my other headphones are open, which results in an improved sense of space and imaging, but at the cost of bass. With the HP-3, bass output was much higher, so it immediately became apparent that I could not compare bass apples-to-apples against something like the HD800. The HD800 once equalized has cleaner bass, but it lacks the sense of slam and impact that a semi-open design allows. 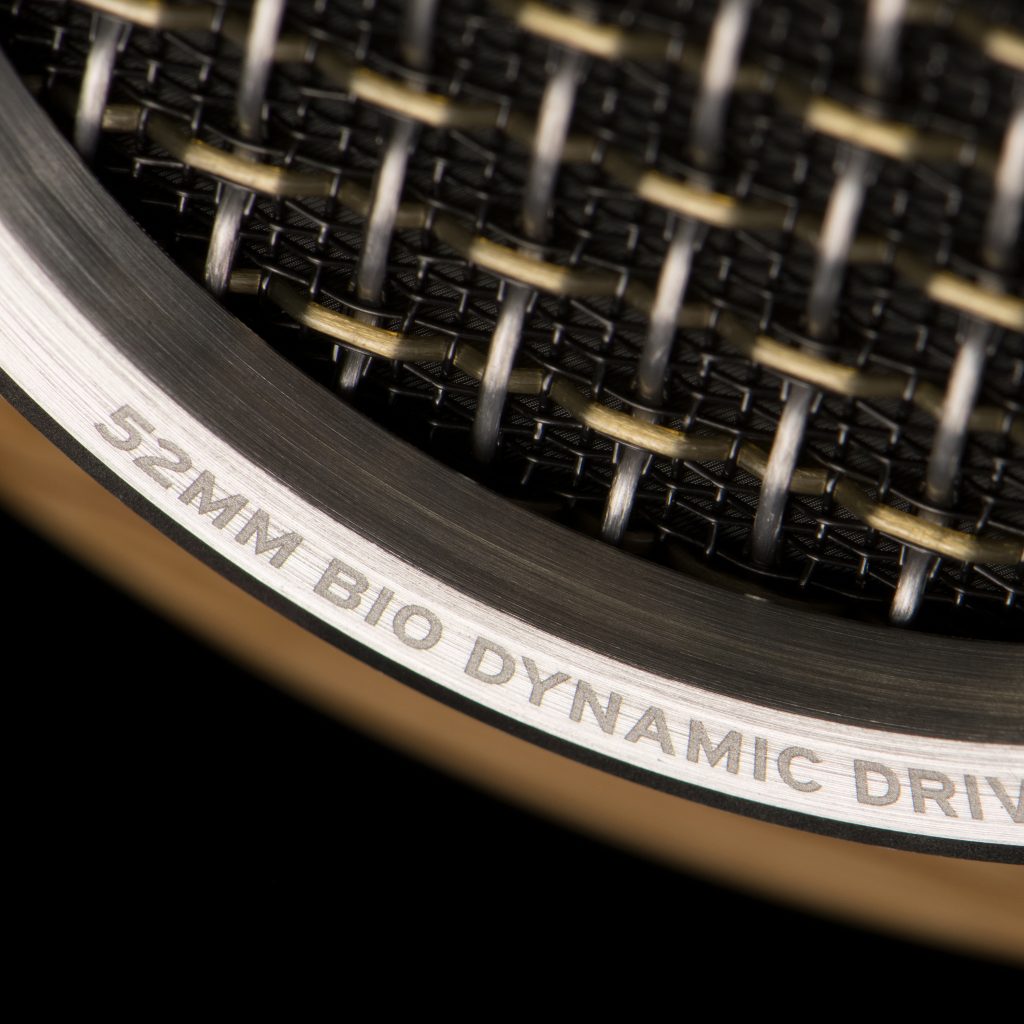 I would characterize the HP-3 as a flavor headphone, a product that you purchase because you enjoy hearing your music in a certain way. This is an ideal headphone for EDM and rock lovers, folks who like tactile base and incisive treble. For home theater owners who like the Klipsch sound, which also tends to be somewhat V-shaped due to their use of horns, it’s likely that the HP-3 is exactly what you are looking for. The bass is ever-present, authoritative and powerful, while the highs are slightly emphasized giving a sense of detail.

For those who lean towards a more neutral signature like myself, the HP-3 may sound lean or recessed in the mids, which can also sound like certain elements like female vocals are slightly veiled. This is a natural product of the V-shaped signature, and was surely intentional. This signature is a lot of fun to listen to, and for 99% of folks I believe they would prefer it to a strictly neutral headphone, however to the most picky audiophile, the result is that some dynamic range is lost and the HP-3 can sound compressed when compared to the HD800 or HD650.

In terms of detail retrieval in the treble, the HP-3 is a standout performer at its price point, delivering crystal clear cymbals, bells and effects in EDM. While not quite at the level of an HD800 in terms of detail, the HP-3 is clearly performing at its price point here and won’t disappoint. This headphone may become fatiguing after long listening sessions for those who are treble sensitive, however this is very much going to be a matter of individual hearing and preferences. 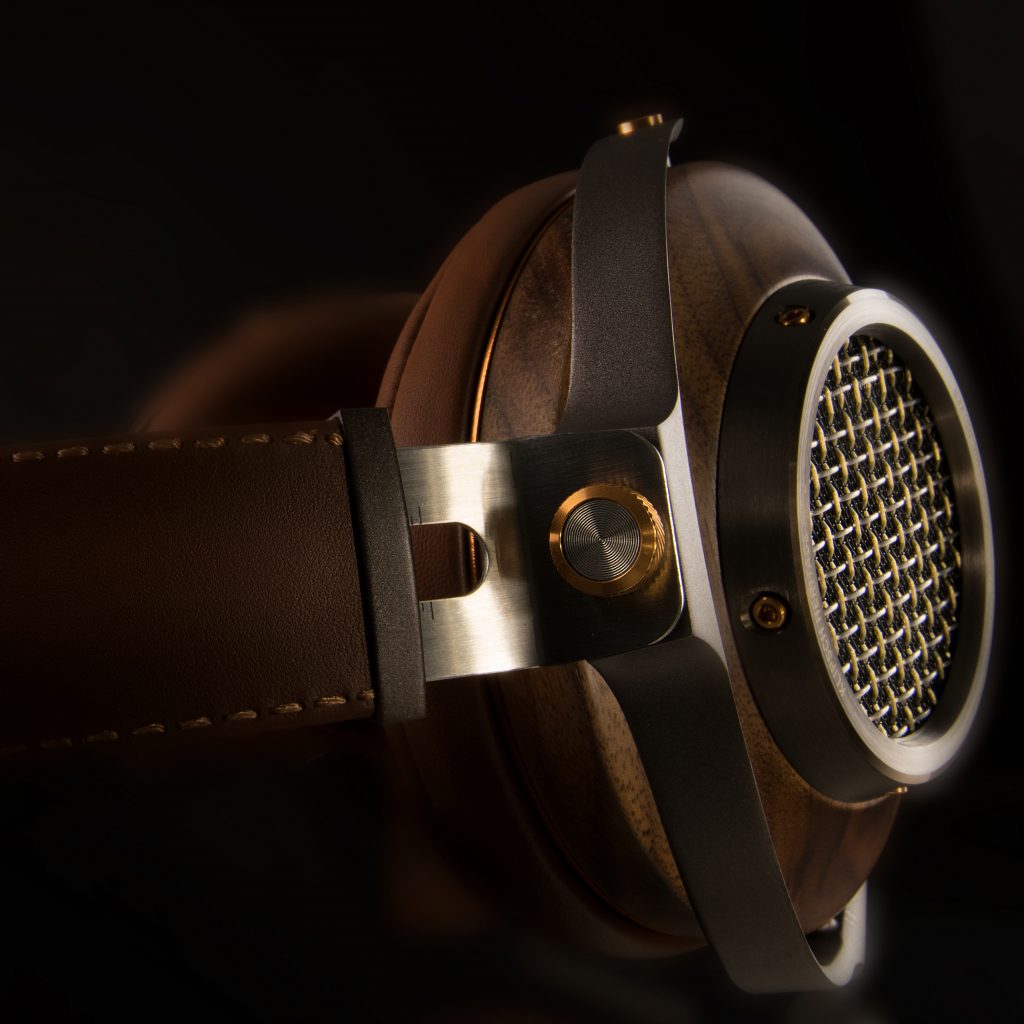 The Klipsch Heritage HP-3 is a surprising product in many ways. First, it’s unequivocally the best packaged and highest quality headphone I’ve seen at its price point. With the exception of the stock cable, no other product comes close in terms of fit and finish, packaging and overall presentation.

Sonically, the HP-3 has a V-shaped tonality that results in emphasized bass and treble at the expense of some midrange detail and a tendency to sound more compressed than other offerings at this price point. On balance, the HP-3 is a hell of a lot of fun to listen to, being a perfect headphone for metal, rock and EDM lovers and will probably appeal to the general population far more than a product like the Sennheiser HD800 would.

Klipsch has done a tremendous job on their first headphone, and while it’s not exactly my cup of tea, I’m positive that it deserves a listen if you’re in the market for a pair of fun to listen to headphones that are built to last. Recommended.