Lego’s third animated feature, The Lego Ninjago Movie, narrows its potential audience even further (after The Lego Batman Movie) by adapting a lesser-known “brand” within its toy empire for the big screen. There are some laughs to be had, but the premise of kung-fu fighting Lego figures wears off very quickly and lacks the charm and innocence of the original Lego Movie.

Lloyd (voiced by Dave Franco) is a high school student who is constantly being picked on because he is the son of Garmadon (voiced by Justin Theroux), an evil Dark Ninja that is bent on taking over the city of Ninjago, regardless of the cost and destruction. Lloyd, though, has a secret identity as the Green Ninja, one of the members of the Secret Ninja Force that includes fellow classmates Nya (Abbi Jacobson), Zane (Zach Woods), Jay (Kumail Nanjiani), Cole (Fred Armisen), and Kai (Michael Peña), trained under the supervision of Master Wu (Jackie Chan). When the Secret Ninja Force is defeated, Lloyd unleashes the Ultimate Weapon on Garmadon, but instead releases Meowthra, a giant cat that begins tearing down the Lego-built city brick by brick. Master Wu then leads Lloyd and his friends on a journey through the jungles outside the city in search of the Ultimate Ultimate Weapon with Garmadon on their tail.

The Lego Ninjago Movie did make me laugh a few times, but it sorely lacked the charm of the original The Lego Movie and the over the top humor of The Lego Batman Movie. My other major complaint is the character of Garmadon, who I felt was just too similar to Lord/President Business from The Lego Movie, not just in tone and character style, but Justin Theroux’s vocal performance was so similar that initially I had thought the character was voiced by Will Ferrell.

IMDB is very vague as to what the final resolution The Lego Ninjago Movie was completed in, but I’m guessing, based on the minimal differences between the 1080p Blu-ray and the 2160p UHD Blu-ray, that this was sourced from a 2K digital intermediate. There is a slight uptick in fine detail, particularly the simulation of plastic textures in the individual Lego pieces that you would think that the movie was made in stop motion rather than CG animation. Colors are more vivid and natural on the UHD, and contrast is also improved with deeper blacks (especially Garmadon) and brighter whites (Master Wu), all thanks to HDR10.

For some odd reason, Warner continues to include a redundant DTS-HD Master Audio 5.1 track along with the far superior Dolby Atmos (with TrueHD 7.1 compatibility), and in a real head-scratcher, also makes the DTS track the default audio (except the Atmos track is the default on the Blu-ray). Even if you do not have an Atmos or 7.1 setup, the Atmos track is the one to go with. This is a highly active mix, with mechs flying overhead, computer voices emanating from everywhere, ninja butterflies whizzing past your head, etc. LFE is strong, providing a deep low-end from all channels. Dialogue is also clear and understandable throughout and never getting lost in the mix.

All special features can be found on the included 1080p Blu-ray edition of the movie.

Audio Commentary: Director Charlie Bean and other members of the crew discuss making the film.

Rumble in the Bricks (1080p; 5:19): A more in-depth look at choreographing the kung-fu fight scenes with some assistance from Jackie Chan and his stunt team.

Rebrick Contest Winners (1080p; 4:39): Lego holds a contest during production of each feature film where fans can submit their own stop-motion Lego short films. These are the winners.

Music Videos (1080p; 6:58): Found My Place by Oh, Hush and Jeff Lewis; Everybody Have a Ninja Day; Warlord Ballad; and Rocktagon.

Digital Copy: An insert contains a code to redeem a digital copy thru Movies Anywhere. I redeemed my code on Vudu and received copies to view on both Movies Anywhere and Ultraviolet partners. UHD on Vudu, Google Play, and FandangoNow; HD on Amazon Instant Video and Movies Anywhere.

The Lego Ninjago Movie is fun, but lacks the charm and overall humor of its predecessors. Video presentation is only slighter better on UHD than on Blu-ray. 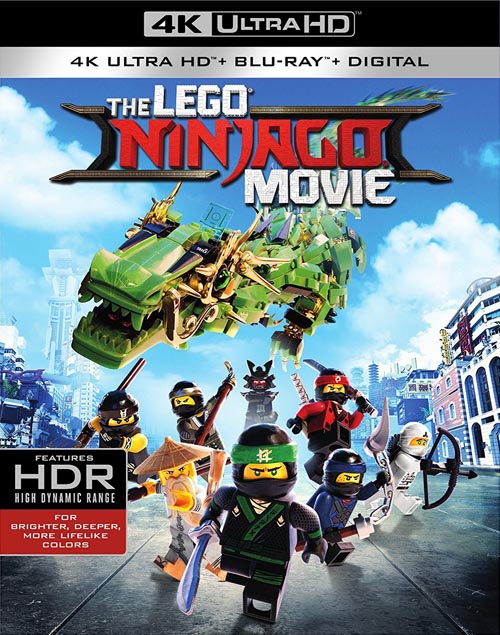