Forum List What's new Dark Style Change width
Log in Register
What's new Search
Menu
Log in
Register
Navigation
Install the app
More options
Dark Style
Close Menu
Posted on September 23, 2019 by Todd Erwin
You are using an out of date browser. It may not display this or other websites correctly.
You should upgrade or use an alternative browser.
Under-rated gem from a modern master 4.5 Stars

John Carpenter’s Vampires arrives in a terrific Collector’s Edition from Scream Factory that is sure to please the director’s fans.

Jack Crow (James Woods) leads a band of vampire slayers, mercenaries of a sort hired by the Catholic church to rid the world of these creatures. As the film opens, Jack is about to lay siege on a house in the middle of the New Mexico desert. Little does he know that he’s awakened Jan Valek (Thomas Ian Griffith), the very first vampire, until after Valek attacks a victory party Jack is holding at a local motel. Valek kills everyone on Jack’s team, with the exception of partner Anthony Montoya (Daniel Baldwin) and prostitute Katrina (Sheryl Lee), whom Valek has infected. Jack decides to use Katrina as bait, hoping to lure Valek and put him down once and for all. Before Jack set out, though, Cardinal Alba (Maximilian Schell) assigns Father Adam Guiteau aka “Padre” (Tim Guinee), as Jack’s new Vatican liaison. The three men, along with Katrina, go on a journey to find Valek, all the while Valek is mounting a vampire army to take on Jack.

John Carpenter’s Vampires is the closest the director has been to creating a western, one of his favorite genres. From the opening widescreen vistas of New Mexico to the incredibly tight close up of James Woods within the first few minutes, the western elements are a definite homage to Sergio Leone, Howard Hawks, and John Ford. Woods’ persona fits very nicely into this world, a no-nonsense man who’s not afraid to say what’s on his mind, particularly if it’s a sarcastic barb. Baldwin is also exceptional as the second in command, the guy responsible for dragging the vampires out of their nest into broad daylight. Thomas Ian Griffith is menacing as the statuesque villain, bent on completing a ritual that will allow him to walk in daylight. Sheryl Lee has the most difficult role, that of victim and bait, and does so almost effortlessly (maybe all that time on Twin Peaks paid off). Tim Guinee is extremely likable as “Padre,” an early role of his and had almost completely forgotten he was in this. Vampires is possibly the best film from the later years of Carpenter’s career.

John Carpenter’s Vampires has been released a few times on Blu-ray prior to this one, although they were all limited edition runs (the Twilight Time edition sold out almost immediately upon announcement, much like Christine). Sony has now licensed the film to Shout Factory, who have released it as part of their Scream Factory line of horror movies. This could very well be the same transfer used for the limited Twilight Time release, although I never owned that. This is a very organic and film-like presentation, something many of us have come to expect from Sony’s catalog. Colors are natural and well-balanced, never over-saturated or blooming, yet still retaining that rugged Western look. Detail is exceptional, with natural grain structure intact while also providing fine details such as facial features, particularly in James Woods. Contrast is also excellent, something that marred prior DVD releases which often brightened up the image and blew out the highlights. Black levels are solid, with no visible crushing and excellent shadow detail.

As with most Shout Factory releases, the studio has included both a 5.1 and 2.0 stereo DTS-HD Master Audio soundtrack for John Carpenter’s Vampires. The movie was released theatrically in both Dolby Digital and DTS 5.1 surround, so the 5.1 track is definitely the one to go with here. This is an excellent track, one of the most modern-sounding for a 20+ year old mix. John Carpenter’s score benefits greatly from the improved fidelity and additional low-end. Surrounds are very active when necessary, with gun shots and other projectiles flying across the room. Dialogue is clear and understandable throughout.

Shout Factory is well-known for putting out excellent collector’s editions, and this release is no exception.

Audio Commentary with Composer/Director John Carpenter: Ported over from the 2003 DVD release, Carpenter fondly recalls and relates lots of little tidbits of trivia about the making of the film. Accessible from the Audio menu.

Time to Kill Some Vampires (1080p; 12:25): Recent interviews with director John Carpenter, wife and Producer Sandy King, and Director of Photography Garry B. Kibbe who all discuss the making of the film. I kind of wish this was a bit longer. **NEW to his release.

Jack the Slayer (1080p; 22:18): James Woods discusses his role in the film, wishing he had been offered more roles like this one, and working with the cast and Carpenter. **NEW to this release.

The First Vampire (1080p; 9:38): Thomas Ian Griffith discusses getting cast in the film, wearing hair extensions, and working with John Carpenter. **NEW to this release.

Raising the Stakes (1080p; 10:26): Greg Nicotero, with some help from John Carpenter and Sandy King, discuss the practical make-up effects used in the film. **NEW to this release.

Padre (1080p; 12:45): Tim Guinee discusses his role in the film as a priest, the fact that this was his second vampire film in a row (he was in Blade), and how generous Carpenter and King were in getting him to his wedding in New York City on time. **NEW to this release.

TV Spots (upconverted 1080i; 2:16): Five original TV spots are included, many of which were very obviously taken from collector’s own VHS recordings.

Still Gallery (1080p; 6:12): Various still images from the film. Unfortunately, there are no chapter stops between photos.

Shout Factory’s release of John Carpenter’s Vampires is a welcome one, with excellent video and audio, plus some fun new interviews, and is highly recommended to fans who missed out on the previously sold out Twilight Time edition.

I don't think the TT version sold out that quickly. It was released in October 2015, and I purchased my copy in April 2016 when it was on sale for $20.
You must log in or register to reply here. 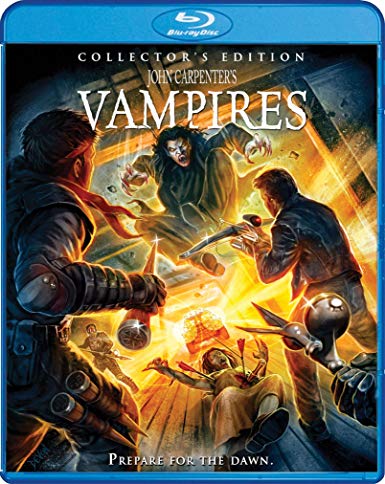