Posted on September 23, 2019 by Todd Erwin
Smaller, faster, but better?

On September 19, Roku announced their 2019 lineup of new and improved streaming devices as well as details of what to expect in the next OS upgrade, Roku OS 9.2, rolling out soon. 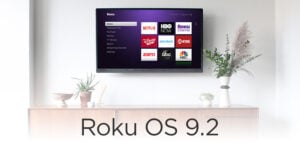 Roku OS 9.2
The new OS update, per Roku, will begin rolling out now (although in my experience it can sometimes take months as Roku pushes updates in blocks, with just a handful of devices per model at a time). Roku Zones will allow a user to search for content by genre or topic across several “channels” or apps. The 4K Spotlight will get a refresh, sporting a new look and simpler navigation. Searching for 4K content will also be easier as you can now add the term “4K” to your search parameter. OS 9.21 will also add shortcuts to the home screen to “help reduce the number of steps you need to take to perform popular actions.” A new Tips & Tricks channel will be added, featuring videos on how to get the most out of your Rou device. There will also be updates to Amazon Alexa and Google Assistant commands and other voice features. 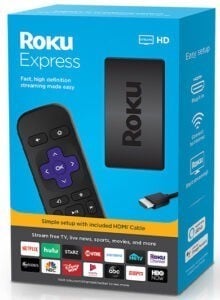 Roku Express
The 2019 version of Roku’s entry-level streaming device is now 10% smaller than the previous model. This is an HD (1080p) device, with Wi-Fi connectivity (2.4 GHz only), uses a microUSB cable for power (power adapter is included), and includes an HDMI cable and an IR remote. MSRP is $29.99, and should begin shipping on or around October 13, 2019. Look for model 3930R to distinguish it from previous Roku Express models. 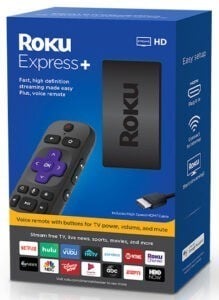 Roku Express+
There is also the Roku Express+, available exclusively at Walmart, including all of the above but with a voice-enabled remote that can also control power and volume on your TV. MSRP is $39.99, and should begin showing up in Walmart stores on September 28, 2019. 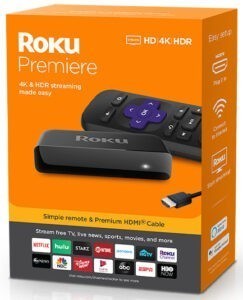 Roku Premiere
A carryover from 2018, the Roku Premiere is very similar to the Express, in that it is a small box that connects to the TV (or home theater receiver), but offers UHD streaming with HDR10 on select “channels” (aka apps). Like the Express, Wi-Fi connectivity is limited to the 2.4GHz spectrum, includes a microUSB power cable and adapter, high-speed HDMI cable, and an IR remote. MSRP is $39.99. 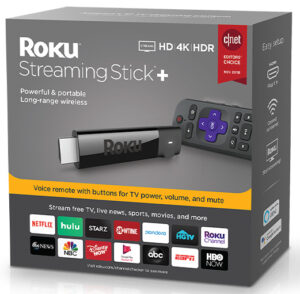 Roku Streaming Stick+
A holdover from 2017, the Streaming Stick+ offers 4K HDR10 streaming in a dongle-like form factor. An RF voice-enabled remote and power cord are included, and the device uses dual-band Wi-Fi (2.4 and 5 GHz spectrums) for faster and better reception. MSRP is $59.99. 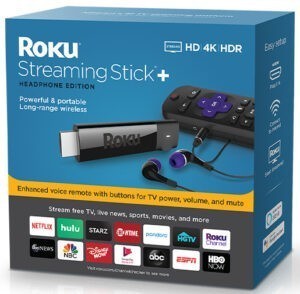 Roku Streaming Stick+ HE
A Best Buy exclusive, the HE stands for Headphone Edition. Identical to the Streaming Stick+, this model also includes an RF voice-enabled remote with a 3.5mm headphone jack and a pair of earbuds. MSRP is $59.99 and should begin to show up in Best Buy stores on October 13, 2019. 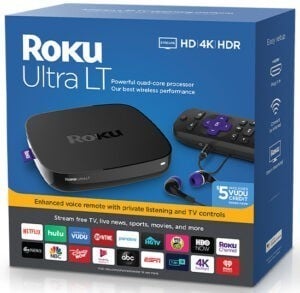 Roku Ultra LT
Another Walmart exclusive, this set top box can stream 4K HDR10 and features 802.11ac MIMO dual-band Wi-Fi connectivity, a 10/100 ethernet port (for more reliable streaming), a microSD slot, an RF voice-enabled remote with a 3.5mm headphone jack, power adapter, and a pair of earbuds. HDMI cable and microSD card are not included. MSRP is $79.99 and should begin showing up in Walmart stores on October 13, 2019. 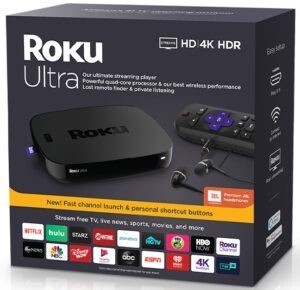 Roku Ultra
This revised model, which can stream 4K HDR10, includes a faster processor, a USB port and microSD slot for local media, a lost remote finder, power adapter, an RF voice-enabled remote with two programmable shortcut buttons and a 3.5mm headphone jack, and “premium” JBL earbuds. HDMI cable and microSD card are not included. MSRP is $99.99, and should begin to arrive in stores on October 13, 2019. Look for model 4670R to distinguish it from previous Roku Ultra models.

My Personal Thoughts….
While this may sound exciting at first, there are a few things that I find rather disappointing. First and foremost – why is the Express (as well as the Premiere) still only a single-band, 2.4GHz-capable streaming device? Both the HD and 4K models of Amazon’s Fire Stick have been dual-band 2.4 and 5 GHz for a few years now, and list for $39.99 and $49.99 respectively. And even that is considered “old” technology, as Wi-Fi 6 (802.11ax) devices have just begun rolling out. Secondly, why are Roku 4K devices still stuck on HDR10, especially the higher-end Ultra? Once again, Amazon’s Fire Stick 4K and Cube began supporting Dolby Vision and HDR10+ this year, as well as HDR10. To be fair, Amazon’s Fire devices are rather limited in the number of apps they support – you won’t find apps like Vudu or FandangoNow. But with more and more newer and easily affordable TVs supporting either Dolby Vision or HDR10+, it’s a bit of a head scratcher that Roku is still behind the curve in both HDR and Wi-Fi technology, especially on their lower end devices.