The components of CBS’ mystery series Instinct are in place for an above average procedural, but the writing needs to be crisper and more involving, and the supporting cast needs to be fleshed out more so that the viewer can come to care about the team as a whole and not just the two main players.

With CBS’s Elementary winding down to the probable end of its run, the network was in search of a replacement and thus produced a mystery procedural with a similar tone and feel at last year’s midseason, Instinct. The show’s one claim to fame was that its leading protagonist was a gay character, a first for a CBS drama series, but in every other way, Instinct has proven itself to be a rather run-of-the-mill mystery series. The puzzles don’t begin to approach the ingenuity of the head scratchers in Elementary, and the show is also indifferently cast with one key role very weakly played and with the show only offering a half-hearted stab at the personal lives of its key characters. Though the show was renewed for a second season despite very mediocre ratings, its not making the network’s fall schedule nor at this point announced for a permanent midseason slot doesn’t bode well for its chances of continuing success.

Dr. Dylan Reinhart (Alan Cumming) holds a doctorate and three other advanced degrees and enjoys teaching his Manhattan university classes in abnormal psychology. A former CIA analyst, Dylan left that covert world behind for a quieter life teaching and writing books, his first being the best seller Freaks. But when a serial killer begins using his book as the jumping off point for a series of murders planting playing cards at each crime scene to suggest the next murder victim, NYPD Detective Lizzie Needham (Bojana Novakovic) calls in Reinhart to assist with the investigation. The two pair up so well together that after some prodding from New York City’s mayor, her boss Lt. Jasmine Gooden (Sharon Leal) allows Dylan to become Lizzie’s partner on any bizarre cases that come across her desk. Dylan’s husband Andy Wilson (Daniel Ings), a former lawyer-turned-bistro owner, is at first reluctant for his spouse to jump back into life-threatening situations, but seeing how much his partner’s imagination is stirred by these unusual murder sprees, he gives Dylan his blessing.

The pilot episode is by far the best mystery in the initial group of thirteen cases being twisty and unpredictable in the best Sherlockian way. But follow-ups feature more predictable restaurant murders, a series of damaged childhood memorabilia at crime scenes, a stalked girl that leads to a double murder, an angel of death in a hospital, the death of a basketball team owner on the eve of moving the team, massacred actors, and a succession of suicide bombers among others, none of which quite have the sparks and surprises found in the best mystery shows. In most of the cases, Dylan seeks help from his former CIA partner Julian Cousins (Naveen Andrews) who is now a free-lance covert operative with still close ties to the CIA, and by the time episode ten rolls around, Julian has made contact with Lizzie, too, and even embarks on a (very predictable) romance with her.

The supporting cast is rounded out by Lizzie’s three detective cohorts at the precinct: Sgt. Kanter Harris (Michael B. Silver), Det. Anthony Fucci (Danny Mastrogiorgio), and Det. Rafael Sosa (Alejandro Hernandez), all of whom submit Dylan to ritual precinct initiation in the early episodes. Midway through the season, beat cop Zack Clark (Stephen Rider) impresses Reinhart enough on a case to pave the way for his promotion to the squad. But there is trouble in paradise: before the season is out, one of them is revealed to be a mole in the department offering undercover intel to one of the strongest drug cartels in the city. The show does spend some time showing the rather rudimentary domestic life of Dylan and Andy, and while the actors playing them have good chemistry together, there is, like with other CBS procedurals, much less focus on their emotional relationship than in Dylan solving the case-of-the-week with his work partner.

Alan Cumming is quite convincing as a brainy crime fighter; if not quite Sherlock Holmes in his brilliance, he’s certainly a second or third cousin to the famed detective with keen insights into the human condition and an encyclopedic recall of trivial information. He also shares excellent chemistry with Bojana Novakovic, too, as they traverse New York City in search of the bad guys (though how Reinhart manages a full teaching schedule even at the college level is anyone’s guess). The boys at the precinct are very good, too, completely convincing as detectives even if they rarely figure majorly in any of the cases. Sharon Leal is the weak link of the cast as the predict lieutenant, lacking dynamism and momentum as the squad leader and making bad judgment calls while lacking authority in her delivery throughout the first season. Whoopi Goldberg pops up occasionally as Dylan’s book publisher ragging on him for his next best seller though she figures importantly in one of the stronger efforts of the season when one of her junior editors is murdered. Being shot in New York, the cream of Broadway performers is available for primary guest roles, so it’s a pleasure to see the likes of Sutton Foster, John Dossett, Terrence Mann, Judith Ivey, and Nikki James turn up at welcome intervals.

Here are the thirteen episodes contained on four discs in the first season set:

The show’s widescreen television aspect ratio of 1.78:1 is presented with anamorphic enhancement for 16:9 televisions. Image quality is very good for standard definition transfers though there is some occasional softness, and there are also occasional instances of moiré and aliasing to be seen as well. Black levels, however, are rich and deep, and much of the image quality looks nice if one is using a good upconverting player.

The discs offer both Dolby Digital 2.0 stereo and 5.1 audio tracks. Both are quite effective and provide an entertaining aural experience. James Levine’s music gets isolated through the soundstage a bit more invitingly in the 5.1 track. City sounds don’t always get the surround treatment they deserve, but overall the placement is well above average.

Deleted/Extended Scenes: fifteen scenes are offered on the four discs connected to the shows from which they were excised.

The components of CBS’ mystery series Instinct are in place for an above average procedural, but the writing needs to be crisper and more involving, and the supporting cast needs to be fleshed out more so that the viewer can come to care about the team as a whole and not just the two main players. Hopefully season two will correct some of the deficiencies of the first season. 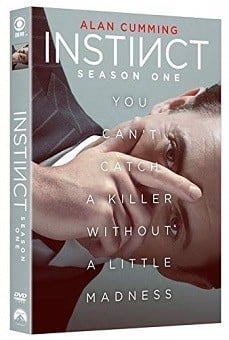