Forum List What's new Dark Style Change width
Log in Register
What's new Search
Menu
Log in
Register
Navigation
Install the app
More options
Dark Style
Close Menu
Posted on June 30, 2016 by Matt Hough
You are using an out of date browser. It may not display this or other websites correctly.
You should upgrade or use an alternative browser.
1930s Hollywood-set melodrama is no "Day of the Locust." 2.5 Stars

John Byrum’s Inserts doesn’t have the richness or resonance of something like The Day of the Locust, and it’s far too talky and unfocused to rank among the memorable Hollywood backstage story films.

Stories of Hollywood has-beens can often make for compelling viewing, especially for movie fans who understand the insider references and sometimes have a built-in knowledge of the inner workings of the movie business. John Byrum’s Inserts doesn’t have the richness or resonance of something like The Day of the Locust, and it’s far too talky and unfocused to rank among the memorable Hollywood backstage story films. But there are some truths here and a couple of really cracking good performances that make it worth a peep.

Once known as Wonder Boy (Richard Dreyfuss) among silent film directors, the coming of talkies has left his movie career in shambles reducing his output to making stag films in the living room of his rundown Hollywood mansion. Current leading lady Harlene (Veronica Cartwright) is addicted to heroin but doing her best to deliver the goods with gay leading man Rex (Stephen Davies) as part of a six-picture deal with business entrepreneur Big Mac (Bob Hoskins). Mac’s current paramour Cathy Cake (Jessica Harper) has dreams of making it in legitimate films, but when an accident intervenes before the picture is finished, she sees no reason why the inserts needed to complete the film can’t make use of her in place of Harlene, using the blue movie as helpful experience before she faces movie cameras at a real Hollywood studio.

Director John Byrum’s script uses character names that are too precious for words and is frustratingly underwritten in terms of its dramatic ambitions (is the film’s major intention merely to prove to the director that his presumed physical impotence isn’t real and is likely an offshoot of his professional malaise? If so, that’s a meager frame on which to hang a movie). Period details seem right with lots of Hollywood names either mentioned (Wallace Reid, Lillian Gish, Pathé, Metro) or implied (how many guesses to come up with the identity of the MGM “big cheese” staying at the Beverly Hills Hotel who propositioned Rex), and references to Prohibition and Clark Gable’s not-yet stardom put the general time frame at 1930 or thereabouts. Byrum’s direction makes great use of his large, central set shot on from many angles, and he achieves a rare moment of chic when the footage being shot in real time quickly changes to the black and white images that will be seen by porn patrons down the line (it would have been even more impressive if those black and white moments had had a few speckles and scratches to mirror the heavily scratched and murky footage seen in the movie’s modern-day prologue). But the movie gives the impression that it’s a stage play with all of the continual talking (it isn’t, but it certainly seems as if it could have been) that never offers a really good reason for requiring all of that dialogue.

Unquestionably the best performance in the film is turned in by Veronica Cartwright who makes her hop-headed, flea-brained actress in turns both infuriating and endearingly pathetic. Bob Hoskins is very good as well as the man who is financing these stag movies but has big plans for a chain of roadside restaurants (hence his name “Big Mac”). Jessica Harper murmurs too much but uses her fresh-faced innocence to mask her ambitious, scheming temptress. Stephen Davies as a third-rate Rudolph Valentino lookalike earning his daily bread as a mortician between movie gigs is a bit out of his class with this company but nevertheless achieves a few memorable moments and like Miss Cartwright is unafraid to go full monty in the porn sequences. Top-billed Richard Dreyfess gives a very tiresome, actorish performance, eccentrically spitting out lines one minute and caressing them the next for no good reason, sibilantly mincing the dialogue occasionally and other times talking like a longshoreman while alternately effecting snobbishness and alcoholic vulgarity.

The film’s theatrical 1.85:1 aspect ratio is faithfully reproduced in this 1080p transfer using the AVC codec. Sharpness is generally very good to excellent, and color is likewise spot-on with believable and appealing skin tones. Contrast has been applied consistently for a balanced transfer. There are distracting dust specks on occasion, heavier in the early going than in the middle portions of the movie. The film has been divided into 24 chapters.

The DTS-HD Master Audio 2.0 mono sound mix doesn’t always catch the dialogue that is sometimes mumbled by Dreyfuss and Harper, but this mono era-typical sound design mixes the “Moonglow” theme and the occasional atmospheric effects (is that flutter on the soundtrack deliberate to suggest old fashioned movie projectors or an artifact not treated by the sound engineers in preparing the disc for release?) with the dialogue smoothly.

Six-Page Booklet: has some tinted and color stills, original poster art on the back cover, and film historian Julie Kirgo’s generous analysis of the movie.

It’s too long and not dramatic enough to sustain that length, but Inserts does succeed in reminding us that there are better pictures out there dealing with the 1920s and 1930s in Hollywood. The fantastic performances of Veronica Cartwright and Bob Hoskins are the best reasons for seeing the movie which otherwise seems like an interesting if unfortunate misfire. 3,000 copies of the Blu-ray are available. Those interested in experiencing this little-seen effort from the mid-1970s should go to either www.twilighttimemovies.com or www.screenarchives.com to see if copies are still available. You can also find out about availability at www.facebook.com/twilighttimemovies. 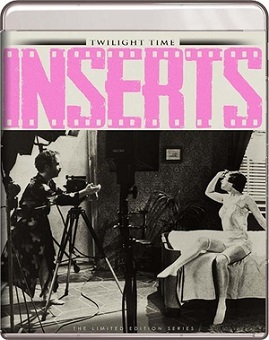