Forum List What's new Dark Style Change width
Log in Register
What's new Search
Menu
Log in
Register
Navigation
Install the app
More options
Dark Style
Close Menu
Posted on June 29, 2016 by Matt Hough
You are using an out of date browser. It may not display this or other websites correctly.
You should upgrade or use an alternative browser.
Engrossing if overly grim drug addiction drama 3.5 Stars

Admirers of fine acting and its trenchant attention to the details of drug addiction will find much to savor in Jerry Schatzberg’s The Panic in Needle Park.

The traumatic nature of addiction whether it be to drugs or alcohol can make for compelling drama (A Hatful of Rain, The Days of Wine and Roses), but when the depiction of its horrors becomes too graphic, the results can become an endurance test for an audience. No plainer evidence of that exists than in Jerry Schatzberg’s The Panic in Needle Park, a harrowingly brutal examination of addiction and its effects on the lives of a couple entwined in it. Spiked by spot-on performances and direction which gets beneath the skin of the characters to their miserable souls, The Panic in Needle Park offers treasures amid its torments.

Midwestern middle class Helen (Kitty Winn) is introduced to drugs as she aborts an unwanted child conceived in an affair with talented artist Marco (Raul Julia). He isn’t hooked on drugs, but street punk Bobby (Al Pacino) sets his cap for Helen and wins her away from Marco with his access to heroin and with a successful robber brother (Richard Bright) who can give him money when things get tight. Though Bobby claims he’s not hooked but merely a “chipper” (taking small doses when he feels like it), he’s fooling himself, and soon both he and Kitty have full blown habits that require them to take bigger and bigger risks to get money with which to buy the smack they need to function. Meanwhile NYPD detective Hotchner (Alan Vint) soon realizes that by staying close to Helen, he can work his way up the drug chain to one of Harlem’s biggest pushers.

Newcomers-to-film writing Joan Didion and John Gregory Dunne have scripted a low key romance that serves as the counterpoint to the drug addiction story showing how when the habit calls, even an overpowering feeling like love means nothing. As Detective Hotchner says to Helen, “All addicts eventually rat; all of them,” and he’s not wrong. The degradations and betrayals mount high as this doomed couple work their way through thousands of dollars as their need for the unending fix grows. Director Jerry Schatzberg gets up close and personal with his junkies showing numerous shots of addicts shooting up in overcrowded flophouse rooms and of needle marks which work their way up the arms of several of the film’s principals (possibly more often than is necessary to make his point) while also keeping a close watch on their physical deterioration and their sense of irresponsibility. He also captures the nastiness and desperation of the Upper West Side area of New York at the time with garbage all over the streets, junkies hanging out on every corner and in alleys and walkways that make even walking in the area dangerous. The narrative through line seems sublimated often as the camera focuses on the two leading players, and supporting characters introduced and capturing our attention early on get relegated to passing mentions or are dropped entirely, obvious weaknesses from the inexperienced screenwriters.

Director Schatzberg has obviously allowed Al Pacino to improvise to his heart’s content, especially in the early going where a jauntily affected walk and some distracting arm and facial contortions are obvious attempts to create a quirky character (the actor was coming off a string of admired performances off and on Broadway which had led to his first Tony Award), but the meat of the character comes through intensely as the film plays, and we see Bobby’s seesaw encounters with heroin, extended jaunts in jail allowing him to come down from the drug and hold onto something like a responsible mob job. Kitty Winn’s Helen (which won the Best Actress award at Cannes) sinks into addiction all too quickly and spends the remainder of the movie barely out of a stupor of dependence, her fresh-faced looks and sweetness fading away as the drug gains control over her. Alan Vint’s underplaying as the dedicated detective makes an interesting counterpoint to Pacino’s often over-the-top petty thief and junkie, and Richard Bright as Bobby’s brother, like the others, claims control over his drug usage while sinking ever deeper into addiction. In an early role, Raul Julia impresses at the film’s beginning and end as the artist who demands a life on his own terms.

The film’s 1.85:1 theatrical aspect ratio is faithfully rendered in this 1080p transfer using the AVC codec. Cleaned beautifully and not showing a trace of its age, the transfer features the mix of sharpness and soft focus that was the hallmark of its original presentation. Color is spot-on: solid but never ostentatious, and contrast has been applied consistently to produce an image that seems exactly right for a low budget film from 1971. Black levels are more than adequate but not exceptional. The film has been divided into 24 chapters.

The DTS-HD Master Audio 2.0 mono sound mix is era-appropriate with its dialogue and atmospheric New York City street sounds combined expertly into the single track. There is no music score used in the film to give it that documentary flavor favored by the producer and the director, but Fox engineers have made sure that artifacts like hiss and crackle do not interfere with one’s listening experience.

Isolated Score Track: though no music is used in the film, Ned Rorem’s score composed for the movie is presented in DTS-HD Master Audio 2.0 mono.

Writers in Needle Park (9:19, SD): co-screenwriter Joan Didion shares memories of working on the movie and mentions in passing some of her later films which were possible when The Panic in Needle Park impressed movie producers despite not making much money.

Notes on Ned Rorem’s Unused Score (2:17, HD): a description of the composer’s work on the movie in text form is presented against a backdrop of one of the film’s music cues (a faster cue from the powder sifting sequence in the movie).

Six-Page Booklet: features some black and white and color stills, original poster art on the back cover, and film historian Julie Kirgo’s heartfelt appreciation for the movie.

Admirers of fine acting and its trenchant attention to the details of drug addiction will find much to savor in Jerry Schatzberg’s The Panic in Needle Park. As part of Twilight Time’s limited availability program, only 3,000 copies of the movie are available. Those interested in experiencing this little-seen melodrama featuring Al Pacino’s first starring role in a film should jump to www.twilighttimemovies.com or www.screenarchives.com to see if copies are still available. More information is also available via Facebook at www.facebook.com/twilighttimemovies.

I'll share that Kritzerland recently released an unused score for this film by Ned Rorem - a composer I am unfamiliar with, but the samples prove this to be an unsung gem that warrants picking up (for those that love movie scores).

This unused score is really terrific and it really is an unsung gem. Horrifyingly, I was not aware of Mr. Rorem's work. After hearing this score I made sure we'd put it out, but on top of that I went and bought his symphonies and some concerto stuff and so far it's all gold.

And now go purchase his Diaries as well to get a rounded portrait of the artist. The several volumes are all gems, as are his symphonies, his vocal works, etc.
P

Just got my copy of "Panic".
Its altogether uncanny just how much Pacino looked like William Holden.

Based on only three Posts, I am also inspired to check out Ned Rorem's works; and, down the road when time allows, go so far as to delve into his diaries, as well. Already, "Panic in Needle Park" was a sale for me; due to this early Al Pacino performance. But this newer offering from TT became an even stronger interest, due to the conversations about this omitted score. A real bonus - if not coup - that makes this edition feel like a two-for-one steal. Thank you Neil Middlemiss, haineshisway and bujaki for these added leads and further ways to enjoying this title and composer.

P.S. It seems that no one got my play on words and TT output, as I was jokingly referring to "Picnic".
You must log in or register to reply here. 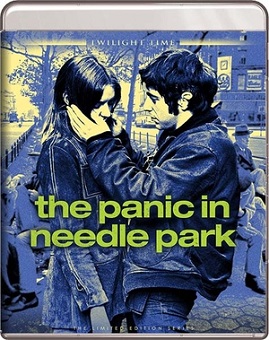