Forum List What's new Dark Style Change width
Log in Register
What's new Search
Menu
Log in
Register
Navigation
Install the app
More options
Dark Style
Close Menu
Posted on July 1, 2016 by Matt Hough
You are using an out of date browser. It may not display this or other websites correctly.
You should upgrade or use an alternative browser.
Erratic neo-noir often goes over-the-top 3 Stars

Romeo Is Bleeding is a decent neo-noir that might have been even better with more careful and thoughtful handling of its greatest assets: an outstanding cast, a twisty, engrossing story, and involving direction.

A neo-noir with exactly what you’d expect from a modern day cops and robbers caper: crooked cop with wife and mistress, mob boss with an agenda, femme fatale with brains to spare, all tied up in a convoluted story filled with twists and turns: that’s Peter Medak’s Romeo Is Bleeding. There are problems with some character construction, some sloppy continuity, and some over-the-top events that defy the laws of nature, but there are rewards, too, with some charismatic performances on display and some neat turns in the story that you won’t see coming.

New York Detective Jack Grimaldi (Gary Oldman) is living the good life with a loving wife (Annabella Sciorra) and a scatter-brained young mistress (Juliette Lewis) while dipping his toes on both sides of the law pond, often furnishing to mob boss Don Falcone (Roy Scheider) inside police information that keeps the law away from him for handsome paydays he’s stashing away for a rainy day. But things go wrong when Grimaldi furnishes Falcone the whereabouts of a dangerous Russian hit woman Mona Demarkov (Lena Olin) he plans to have assassinated and then the police move her secretly to another location. Falcone demands Grimaldi now take care of Mona himself to square his standing with the crime lord, but trying to handle a smart, experienced killer like Demarkov starts Jack on a downward spiral that puts his life and the lives of those he loves in tremendous jeopardy.

Hilary Henkin’s script comes complete with poker-faced narration by the leading man telling the story in flashback about someone whose identity he seems to assume. The unusual beginning comes full circle later on and makes complete sense eventually, but it seems a pretentious way to get things started. As the story plunges deeper and deeper into the betrayals and revelations of this labyrinthine tale, there are moments that seem ridiculously overdone, most of them involving Grimaldi and Demarkov in one encounter after another where the duo seems to be doing a mating dance to the death (since Grimaldi finds it hard to keep his pants zipped when any female is in his presence, her obvious come-ons, one straight out of Basic Instinct, would be ludicrous if the male in the coupling wasn’t already established as completely sex obsessed). Things get really out of hand, however, in a late-film sequence where she manages to escape from a car despite a bullet hole freshly inflicted in her leg, and the garroting she manages on him doesn’t even show up on his neck in subsequent scenes: the film by this time rather carelessly haphazard in director Peter Medak’s striving for thrills and gore instead of concentrating on more careful construction and attention to detail throughout the near-hallucinatory tale.

Gary Oldman is put through the ringer during the course of the film (humiliated, mutilated, subjugated), but he carries these extremes off rather handily and hides his British accent nicely. Lena Olin makes a memorably nasty villainess with more confidence and brass than all of the males she manages to outsmart. Annabella Sciorra offers a sympathetically appealing performance as the wronged wife (and he cheats on this gorgeous woman why?). Juliette Lewis has less to do as the bimbo girl friend and seems to press her accent a bit too hard. Roy Scheider is just fine as the soft-spoken crime boss who expects results for his money, but Will Patton and James Cromwell are truly wasted in throwaway roles as minor detectives. Michael Wincott shares a couple of good scenes with Oldman as middle man Sal who carries inside information from Jack to Falcone.

The film’s theatrical aspect ratio of 1.85:1 is faithfully reproduced in this 1080p transfer using the AVC codec. Pleasingly sharp rather than razor-edged, hair textures, clothes, and facial details can still be seen in close-ups. Color is solid, too, even if skin tones occasionally seem a bit on the rosy side. Black levels are acceptable, and contrast has been nicely managed throughout. There are occasional specks here and there, but the transfer on the whole is pretty excellent. The movie has been divided into 24 chapters.

The DTS-HD Master Audio 2.0 stereo sound mix offers the well recorded dialogue clearly and distinctly. Mark Isham’s music sounds nice and full in the available channels, and atmospheric effects give some heft to the neo-noir’s dramatic impact. No age-related problems with hiss or other artifacts are present.

Six-Page Booklet: contains some tinted and color stills, original poster art on the back cover, and film historian Julie Kirgo’s honest and astute appraisal of the movie.

Romeo Is Bleeding is a decent neo-noir that might have been even better with more careful and thoughtful handling of its greatest assets: an outstanding cast, a twisty, engrossing story, and involving direction. There are only 3,000 copies of this Blu-ray available. Those interested in purchasing it should go to either www.twilighttimemovies.com or www.screenarchives.com to see if product is still in stock. Information about the movie can also be found via Facebook at www.facebook.com/twilighttimemovies. 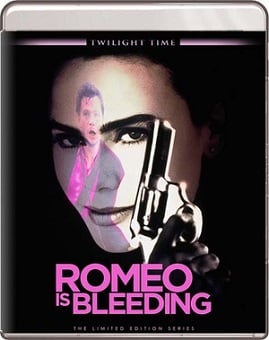